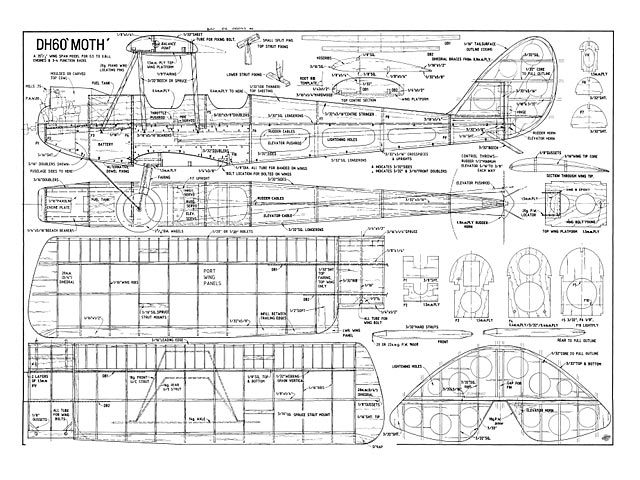 Note this plan appeared along with the DH82A Tiger Moth (oz7955) in the same article, so the text describes both models.

Quote: "This pair of Moths owes quite a lot to the 20 size Cirrus Moth (oz11723) and Tiger Moth (oz11864) I designed and published in RCME in December 1985 and 86 respectively. Similar construction has been employed bet greater efforts have been made to keep the overall weights down, this being more important with the models if you wish to try your luck at flying them indoors ...the good news is that at 23oz the 'Tiggie' flies wery well. My Gipsy Moth came out at a tweak over 16oz, but I used micro servos, a 100MAh battery and a Micron receiver. Andy used the heavier mini gear."

Quote: "Although Andy took his Tiger Moth' to Olympia he opted, after a baulky motor on the first R/C session, not to fly. His was probably a wise decision as I, in a 'where angels fear to tread' mood, put mine aloft. There was one suitable day for test flying over the Christmas period and before the MEE and I took the opportunity to put the 'Gipsy' into the wide blue yonder (it was one of those cold, frosty/snowy, mornings with a clear blue sky). The wind was blowing five to eight knots so it wasn't ideal. but not impossible. Away she went. from Jeff Barringers hand launch, as pretty as a picture. Practically no trim adjustment was needed and after a minute or so feeling the controls I brought her round for a couple of photo passes. Because of the wind I didn't venture anything too low down, but the approach and landing was exemplary and the little biplane had handled very well throughout the flight. It was one of those pleasing flights and I viewed its indoor baptism with less trepidation.

At Olympia the PAW 55 was fired up. Both of my examples have performed very well, and with the engine purring away the model was launched towards the diagonally opposite corner for a left hand curcuit. All was going well until I got into a position where I needed to execute a figure eight and that involved carrying out a right hand turn. The turn to the right. against torque was not as fast as the ones to the left and I hesitated too long before throttling back and - bang - it was smote by a cast iron arch. Damage is not too bad and it will be flying again by the Nexus 'Small models day'.

On reflection, the 'Gipsy' (and the 'Tiger' too) should have more dihedral if you want to fly it inside in limited space and also ample rudder movement. In fairness, you also need to be in good flying trim yourself and if you are young and have smart reactions, so much the better. Certainly it pays to fly the model outdoors and rehearse flying in a confined space, it can be done. it just needs skill and 'bottle'. I think I'll get Paul Heckles to do my flying next year!

Construction: Andy Ward has written a few notes on the building of the 'Tiger Moth' and the 'Gipsy' is essentially similar. I keep referring to it as a 'Gipsy! although it is shown on the drawing as a 'Cirrus Moth'. If you want to build it with the more elegant nose you will have to reduce the spacing of the-engine plate bearers, by a 1/4in each side and put a further 1/4 in nose trebler so that more can be sanded away at the front. Obviously the shape of the cowl will be different, Plan 2708 (price £3.15 plus £1.25 postage) from our Plans Service will show all the details.

You may have problems in getting the nylon tank specified on the drawings, if so use one of the small control line, or free flight metal fuel tanks. The PAW 55 is very frugal on fuel consumption. the tank specified will give a longish run - certainly too long for concentrated indoor flying. Just carry out a fuel consumption test before flying to give you an idea of probable flight time. Do, do keep that back end light and the radio as far forward as possible. In view of the risk of the tail heavy situation I would suggest using a 100MAh battery, wrapped in a polythene bag and positioned under the engine. The radio receiver can then be located in the area between the formers F3 and 4, ahead of the wings, and the servos moved as far forward as possible, but leaving room to insert the Rx through the hole in F4.

If you want to use a two function radio (Hitec do a very reasonably priced two function. 27MHz, system with a Gem micro Rx and mini servos) I would suggest the Irvine Mills .75cc Replica diesel as an alternative power plant. This is also a very tractable and reliable engine, ideal for those first trimming flights. Using the integral tank you will get a flight time of around three to four minutes, long enough to have some real fun.

Because I wanted to use a colour and silver decorative scheme I decided to use the Fibafilm silver on the flying surfaces and Litespan on the fuselage, lightly sprayed with orange and black. The representation of silver painted fabric with the Fibafilm is excellent and both coverings are compatable to the use of diesel fuel. I was delighted with the way that the black trimming to the flying surfaces turned out. This is to be seen on quite a few 'Moths' and I didn't look forward to the thought of masking and painting of this edging. What I chose to do was to iron on narrow strips of black Litespan and this worked out very well. First I taped down a strip of Litespan and applied a good coat of Balsaloc. When dry I cut it into narrow strips attached one end to the leading edge at the wing root, stretched the strip slightly (which helped it to curve around the edge) and continued to iron it down around the wing outline. Once round, it doesn't have to be in a single strip, it is ironed around the edge to seal it, there are very few wrinkles, even at the trailing edge curves and the effect is great. It took only an hour or so to complete, in fact I built three indoor models over the pre-Christmas and Christmas period so you can tell that I didn't have much time to spend on the 'Gipsy'. Shamefully, I have to admit that I didn't complete the engine cowling, the idea was that the test flights would be carried out first... " 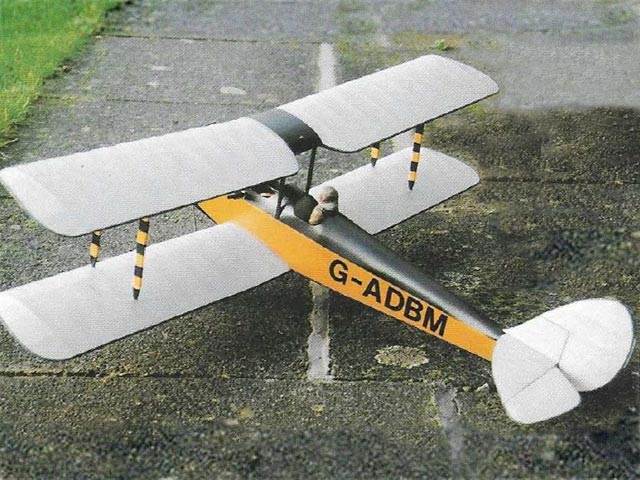