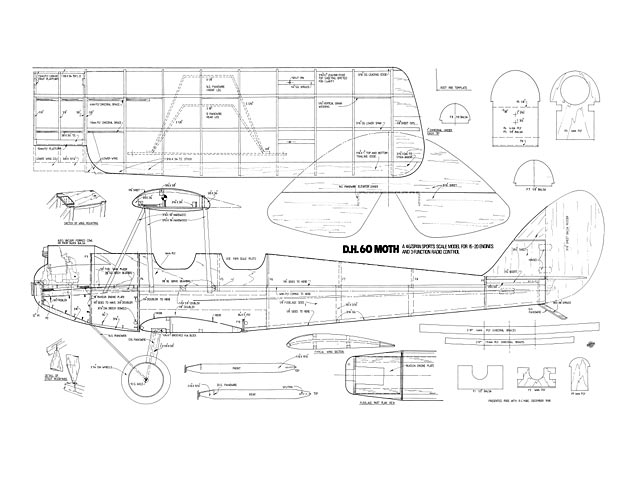 Quote: "A sport scale DH60 Moth at around 1/8 scale (46.5 in span) that was presented free with the December 1985 RCM&E. No designer accreditation but I think it has all the hallmarks of a Boddington special... If so I suspect it may be a model that was very popular at the time for early electric conversions. I've included two versions of the plan - one authentic original as it was presented at the time (rather cramped to fit the small single sheet and with several bits that needed to be cut and stuck on) and one that I've edited for convenience. No article unfortunately, but maybe someone will find them! [edit: found now, see below]"

Note we have set the edited plan (more convenient layout) as the primary download file.

Introduction: The DH 'Moth' was one of the most successful light aircraft of all time and was used to break many of the existing duration and distance records for aeroplanes of that category. Few changes have been made to the model to affect scale accuracy, a revised wing section is used and the nose cowling has been simplified (the 'Cirrus' engine version has been selected, although the model could be adapted for the 'Gipsy' or 'Hermes' versions). No ailerons are fitted, with the scale dihedral used, the rudder gives excellent control and ailerons would have only limited effect.

The prototype was flown with a Veco 19 engine and this proved to be more than adequate in power, a high performance .15 would certainly be sufficiently powerful and a 20 size four-stroke engine ideal. Use a large diameter fine pitch propeller (ie 9 x 4, or 10 x 3-1/2) to keep the engine speed low and provide good ground acceleration.

Construction: Read the instructions through completely and check through all the parts and identify them with the plan White glue (PVA) may be used for all construction except for wood/ metal joints, where a slow drying epoxy should be used. Excessive application of glues adds unnecessary weight - the strongest joints result from accurately mating surfaces and minimum adhesive. Protect the plan with clear plastic or wax rubbed on the drawing.

Wings: The upper and lower wings are basically the same except for the centre section units, the outer panel root sections and the interplane strut fittings. Note that the lower wing spars extend to the wing tip. top spar terminates at the tip rib. Upper and lower wings are constructed in three panels - port, centre and starboard - and joined with dihedral braces at a later stage.

Pin down the 3/16 sq lower spars and lower 1/16 x 1 in trailing edge strips to the port and starboard panels for the lower wing. Glue the wing ribs and 3/32 ribs ensuring that all ribs are vertical, except the root rib which should be angled to the dihedral template Glue the 3/16 sq top spar and leading edge into position plus the 1/16 x 1 in top trailing edge. The 1/16 x 1 in vertical grain webbing is fitted to the first two root rib bays and thence in alternative bays. Butt joint the 1/16 x 2 in leading edge sheeting to the top spar glue to the ribs and to overlap the leading edge. Join wing tip pieces and set aside to dry.

Fill in between the trailing edge strips at the two root bays and tip area with 1/4 x 3/4 in trailing edge stock reinforcement. Build up the lower spars at the tip with 3/16 x 1/4 in at the front and 3/16 sq at the rear spar to give the wing tip a cambered section (this improves the appearance of the model when viewed from the side). Add 3/16 x 3/8 fairing pieces to the upper surface of the tip.

Interplane strut fixings are produced by drilling a small hole (1/32 in) in the 1/4 in sq hardwood crosspiece inserting a small split pin bending over the ends of the pin above the hardwood and epoxying in position. When the panels have been removed from the building board - when the glue has thoroughly dried - and sanded, the strut fixings can be glued in position with the upper surface of the supports lining up with the upper edge of the ribs and sheeting. Reinforce the ends of the hardwood with scrap balsawood where they butt joint onto the ribs.

Make up the port and starboard upper wings in a similar manner but with the addition of 3/16 in root fairing to allow the curved rear root outline. Glue the strut fixings to the underside of the wing panels, flush with the ribs. 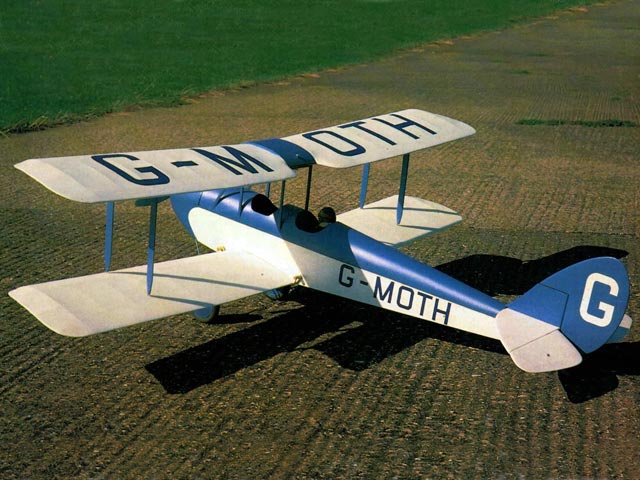