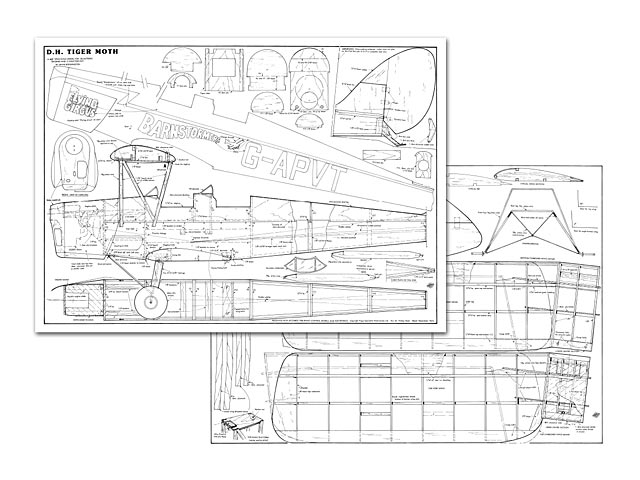 Quote: "Your free plan for a sports scale version of the famous 'Tiggie' for 20 size engines and 3-4 function radio.

BEFORE SETTING DOWN TO design a particular R/C model there has to be a reason, however small, for choosing that subject. It may be a model that has been on your mental list for ages and you have never managed to find time to draw it up, or it might be a photograph in a magazine that starts the pencil moving. For me, the choice of the Tiger Moth was through a multitude of associations. It was the first aircraft I ever flew in, as an ATC cadet, it was the first civilian aircraft I learned to fly and it is one of my all time favourite aeroplanes.

Having decided it was well past time that I designed an R/C 'Tiggie' the next decision was: how big, and how scale? As the DH 60 Cirrus Moth (oz11723) published in RCM&E just 12 months ago, was so popular it seemed sensible to produce the 82A to the same format ie semi-scale and for 20 sized engines. Selecting the colour scheme for the model didn't pose any problems either as I operated two specially decorated Tigers, 'Victor Tango' and 'Papa Juliet' when organising the Barnstormers Air Displays. For those of you who wish to use a different colour scheme the free poster illustrates numerous existing Tiger Moths, there must be one near you.

Construction: Keep it light, keep it straight and keep it clean. Use your favourite adhesives, PVA and epoxy are suitable, protect the plan and cut out all parts before you start construction. Check the fitting of the engine and the radio equipment and decide the type of linkage to use. The prototype did not have ailerons fitted but these can be incorporated, as can closed loop rudder control.

Wings: As usual with biplanes, you have to build four panels, plus two centre sections. Because the sweep back and dihedral is different on top and bottom wings do make sure that you construct the correct panels and join them to the right centre section! 1/16 top leading edge sheeting is shown on the drawing, if you prefer, you can dispense with this and insert riblets as for the prototype.

Wing panels are built flat on the building board in the conventional manner, remember to angle the root ribs of the outer panels to the templates shown. Wingtips sheeting is curved to give an impression of undercamber when viewed from the side. When the panels are constructed and sanded they should be joined, propping up at the wingtips and ensuring the root ribs are mating accurately. Mark the positions of the dihedral braces on the undersides of the wings and cut slots with a razor saw, for the braces. Glue the braces in position (slow drying glue) propping up the wing panels again to the correct dihedral. Because of the sweep back the dihedral braces should be reinforced with 1/4 in balsa to the lower spars.

Bottom wing fixing is by two birch front dowels and two rear nylon bolts into a tapped ply-wood bearer in fuselage. Top wing is retained at the front by 18swg wire prongs and a central rear 4ba bolt into an anchor nut. Interplane strut fixings utilise small split pins, the struts can be permanently fixed to the top wing. Rigging, which is not functional, is from shirring elastic - details of routes can be seen on the ASP three view drawings.

Fuselage: Cut the 1/8 in sides out, including slots for the cabane strut fixings, and add the 1/8 and 1/4 in doublers to areas indicated on the drawing. The lower rear longeron, vertical stiffeners and stern posts should also be glued to the sides now -one left hand and one right side of course. Join the sides with formers F2, F4, F7, F9 and F10 in position check for squareness.

Centre section struts are from 1/8 x 1/4 in beech and are constructed flat over the plan. Round the edges first, except where there is a butt joint, or the ends house into the fuselage. The assembly is reinforced by an 18g pianowire inverted 'U' piece epoxied and bound to the front struts and 1.5mm plywood centre section platform.

Fix the centre section to the fuselage, again checking for 'squareness.' Cut the 3/8 sq beech engine bearers accurately to length and predrill pilot holes for the fixing of the engine mounting plate. Note that the engine is mounted on the underside of the paxolin plate ie between the bearers. Glue the bearers into position temporarily positioning the mounting plate and add 1.5mm plywood side-plates, formers F 1, F3, F5, F6 and F8 (plus the 1/8 balsa sheet across the top of the fuselage).

Pre-drill the servo mounting bearers and position bearers in the fuselage to suit the servos you are using. Drill and tap the 1/4 in ply rear wing bolt plate and glue it to the fuselage sides and F10. Add the 1/8 balsa and plywood underside sheeting; note that the front under-carriage strut is bound and epoxied to the front plywood plate.

Completing the basic structure of the front of the fuselage, before bringing the rear sides of the fuselage together, is to minimise the risk of distortion and uneven bending when the latter opera-tion is carried out. The fuselage has relatively sharp bends immediately behind formers F9 and F13, slight scoring, or dampening with ammonia will make the bending easier; the stern posts and lower stringers are sanded to give an accurate joint. Top decking to the fuselage is from .4mm plywood over-lapping the fuselage sides by about 3/32 in, it is applied in three sections. Form the tail skid from a 1.5mm plywood centre core, let into the stern posts, and build up on either side with spruce and balsawood. Consult the three views for the full size assembly.

Sand the front of the fuselage to taper as shown on the plan and section (F2) and add the side stringers; they taper to the rear and at the front.

Nose cowling: It is not too difficult to construct the complete nose cowl from block balsa (nose and underside) and thin plywood, plastic sheet or litho plate. A separate article suggests a method of carving and glassfibre reinforcing the noseblock or you can just use a firm grade of balsa. The whole cowl, as far as F3, is removable in one piece.

Tailsurfaces: These are shown as simple sheet structures but you could use a built up structure for greater authenticity.

Finishing: Any of the recognised covering materials are applicable to the 'Tiger' from tissue or Solarfilm to Polytex or Nylon - just try to avoid any warps creeping in to the wings. Limiting the painting trim to about one third of the total airframe will help to keep the over-all weight down - light models fly better!

Add enough details to make the model convincing but do not go overboard, a pilot is important when the model is flying. Dummy rigging wires also help give authenticity.

Flying: You must all know the dire warnings about keeping to the centre of gravity and never wandering behind it - and of checking, even if it is only 'eyeballing,' the completed model to ensure that everything is true (a little washout in all wings is permissible).

With the luxury of short grass or tarmac your first flight can be from a take-off, with long grass you will have to opt for a handlaunch - so obtain the services of an experienced launcher of biplanes. Control surface movements should be in the region of lin. each way on the rudder and 1/2 in up and down on the elevator. Avoid too coarse control movements on the rudder as the model goes away - sudden movement will cause the model to 'kick' around - use gradual inputs. For power-off landings you will need a steep approach - biplanes are draggy and the flying speed must be maintained. Whenever possible aim for a power on landing, a small burst of power immediately prior to the touchdown will give a satisfying flare out. For the more adventurous you could fit an SOW rig (stand on wing) to the 'Tiggie' but, as for the full-size, watch out for the change of trim.

For this operation you would need a more powerful engine, the same applies if you were to convert the model to a 'Sea Tiger' by fitting Edo style floats. Whether wet or dry, we wish you lots of fun with this model of a much beloved aeroplane." 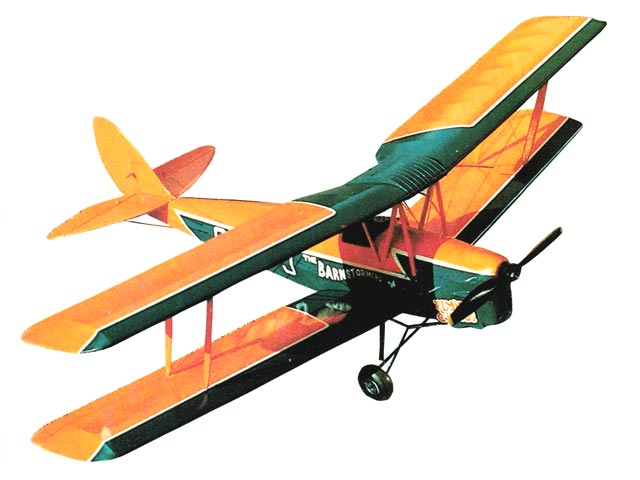