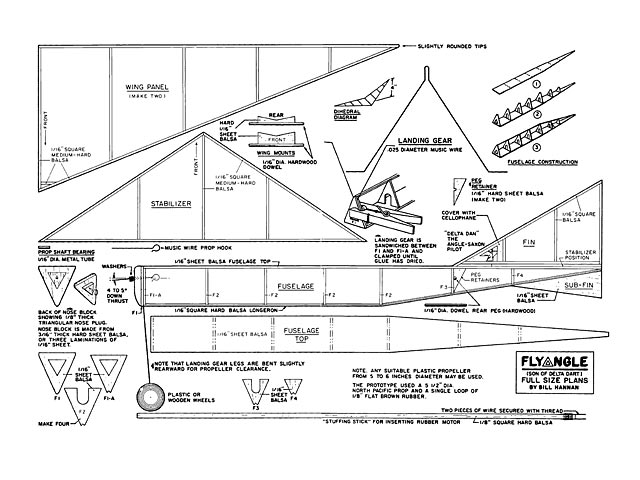 Quote: "Flyangle, by Bill Hannan. For added realism, this rubber-ppowered cutie is a slightly advanced version of the basic Delta Dart.

Probably the most influential simple model of this decade has been the Delta Dart. Designed by AMA Technical Director Frank Ehling, the model was published in the much-lamented Sig Air Modeler magazine during 1966. It was known at the time as the AMA Racer. In April of 1967, American Aircraft Modeler featured plans under the name Delta Dart (oz7931), which seems to have been the most widely accepeted name for the species. A modified version kitted by Sig is called the AMA Cub. A larger glow engined variation called Oily Bird (oz4589) appeared in the Oct 1968 issue of AMerican Aircraft Modeler, and in fact full size plans for it are still available through Sudden Service Plans.

Flyangle represents an effort to produce a slightly advanced version of the basic idea, incorporating a fuselage and other items intended to add a degree of realism. While the model is not as simple to construct as the Delta Dart, anyone who is willing to work carefully should be able to produce an attractive, flyable aircraft..."

Quote: "Steve, The 'Flyangle' from AAM, March 1970. Simple little rubber ship is an upscale Delta Dart. Spans 19in, from the "For the Tenderfoot" series. Lots of good little planes published under that heading by Am. Aircraft Modeler, this one by the prolific Bill Hannan." 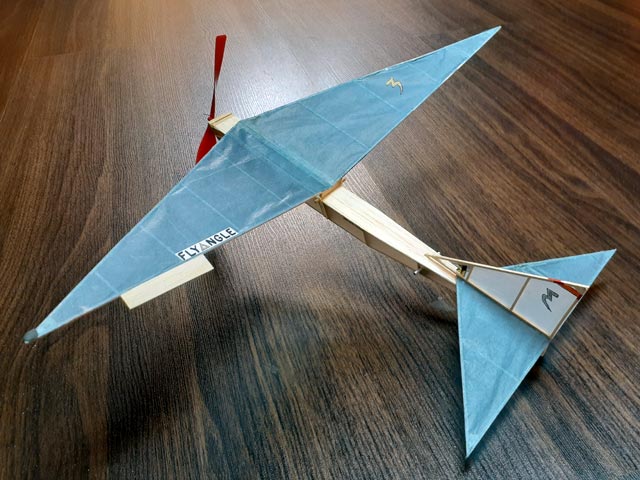