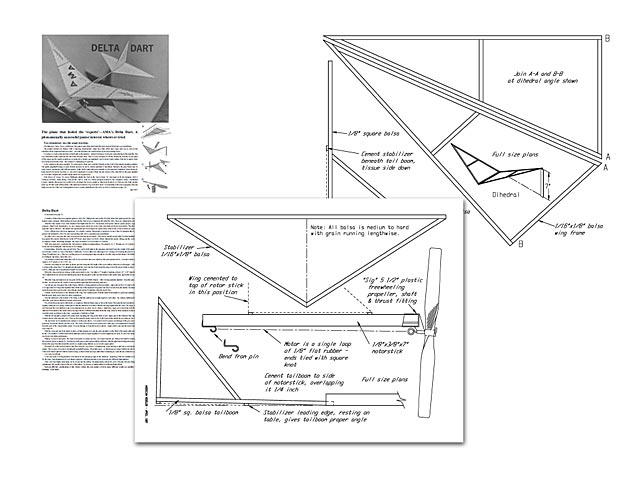 Quote: "The plane that fooled the 'experts' - AMA's Delta Dart. A phenomenally successful junior interest wherever tried - too elementary was the usual reaction. Old fashioned. Crude. Heavy. Inefficient. But respect came when kids found the Dart a snap to build and a good performer.

The pointed surfaces are blessed with a forgiving characteristic: warps have little effect since large areas are in close to the centerline where alignment tends to be true - out at the tips there isn’t much surface to provide twisting forces.

Covering is a cinch as the structure is built right on the material - instead of trying to avoid glue joints sticking to the paper the idea is to deliberately make joints and the rest of the structure stick. Then it’s only necessary to lift the framework, trim the excess paper off the edges and the usually mysterious covering job is already accomplished! And it doesn’t really matter if the tail is upside down or reversed from front to back—the wildest of combinations fly just fine

A key element is the prop assembly. It’s ready-made, cheap and excellent. Besides saving work it has natural adjusting qualities. The plastic propshaft bearing is easily twisted and may be set for various amounts of side-thrust. Similarly, the prop blades may be easily bent to experiment with different pitches. North Pacific makes the prop assembly for its nationally distributed Sleek Streek all-balsa ready-to-fly model. Sig Mfg Co also sells it separately or as part of their own kit version of the Dart (10¢ for the prop assembly or 35¢ for the complete kit, at hobby shops which sell Sig products).

Dick Meyer of Verona, Pa., (near Pittsburgh) started the Dart on the way to fame. He was urged on by the designer, AMA’s Technical Director, Frank Ehling. Dick put the Dart to work in a Junior program backed by the Allegheny Model Aeronautics Council. Initially, the project was scoffed at by old timers but it soon caught on when kids flocked to it. Dick and wife Ruth actually made up 300 kits on the kitchen table, with materials donated by Sig, for kids to build. For leadership in this junior program Dick and Ruth received one of the new Distinguished Service Awards established by the AMA in 1966.

A number of these kits were supplied gratis to AMA HQ. Ehling took some to the '66 Nats where kids again proved how easy they were to build and fly. Demonstrations there helped create a demand, which influenced Sig to put the Dart out as a commercial kit called the AMA Racer as a stimulant to junior interest.

After the Nats, leaders of an AMA chartered free-flight club, the DC Maxecuters, took up the Dart as a junior project. Again the Dart had to overcome an initially lukewarm response, which it did dramatically - in one evening session about two dozen Darts were built and flown successfully. This factor of quick and almost certain success is what has made the Dart so effective. The results were spectacular and were featured in a photo story in the Model Aviation section of American Modeler (Feb ‘67, pp. 40-41).

NASA officials have also been impressed. As a result, a special Dart project is underway at one of the Government labs to produce packages for use by schoolteachers. The project was initiated by AMA HQ and is proceeding with AMA cooperation and consultation.

With such impressive credentials the Dart needs no further recommendation. The plans by HA Thomas are of a version simplified slightly from the original. Don’t you be fooled into not building the Dart because it’s too simple.

Construction: Build the wing and tail first. They can be built right on the magazine plan itself since the weight of the paper is not important. Lay the magazine plan on a soft wood board, Celotex or even a flat sheet of cardboard. If you’d rather use other paper for covering avoid ruining the plan by laying a sheet of transparent plastic over it..."

Article pages, text and pic are included in the planfile. 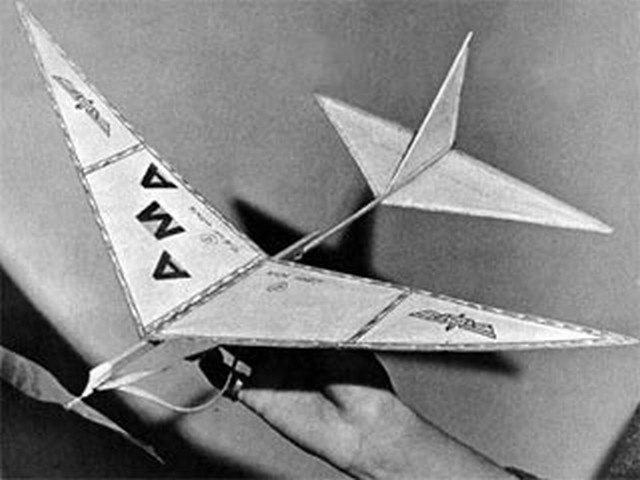 Hi Steve & Mary, Since I was the one who begged for this plan on rcgroups I thought it right to share a photo of the resultant model [more pics 003]. I began cutting strips and constructing the model about 20.00 on New Year's Eve as a last effort to build a model to completion in 2016. By 23.00 it was done. Could have been quicker but I was using white glue! It hasn't flown yet but I foresee no issues.
SimonP - 12/01/2017
Hi Steve and Mary, Here are a couple of photos of my Delta Dart oz7931 built from Outerzone plans and converted to capacitor power [pics 004, 005]. I'm getting too old to wind up rubber motors! I read a 2011 report of a Delta Dart with a 720 motor, 65mm prop and a 10F capacitor that would fly for 50 seconds. I think that would be great in our sports hall! I have used identical components. The 2011 model weighed 13.4g and mine weighs 12.22g, so I'm in with a sporting chance.
Chris Pinn - 03/02/2021
Add a comment