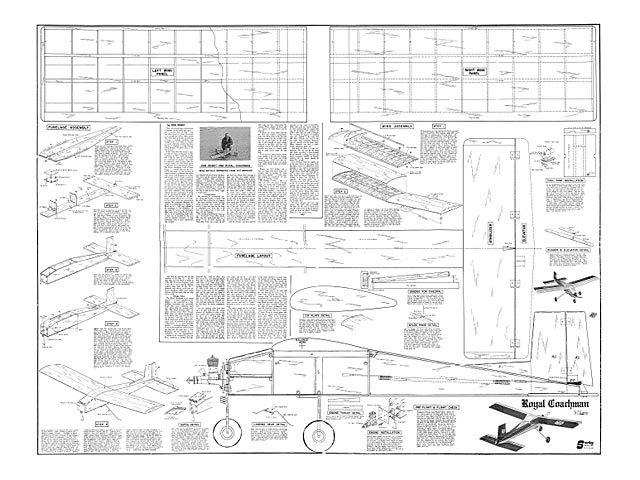 The Royal Coachman (oz1302) was first published in RCM, June 1965. This here is the design as later kitted by Sterling.

Quote: "Our prototype balanced slightly aft of the point shown on the plans. With the Annco servos we added three dead peacells to the battery compartment for ballast. With the light additional weight of the Royal MK multi servos, two of these were removed.

If you have built the Royal Coachman according to plans, you will have no difficulty with initial flights. Use a 7x4 prop on the Cox .09 and an 8x4 on the .15. If your landing gear tracks straight and true, the Coachman will lift off with a slight tap of elevator in about fifty feet. As mentioned earlier in the article, flying this model with an .09 is simplicity itself - it is docile, yet will perform simple, basic maneuvers with six channel gear - an excellent trainer and sport ship for the Sunday flier. But add a .15 and you've got a fast moving ship that's quite a handful.

We hope you like ease of construction and the many hours of flying pleasure you'll get from the Royal Coachman. "

Quote: "Hey there, here is a companion to your RCM Royal Coachman (oz1302) plan. This is a plan I just found at Hobby Warehouse in Richfield, MN which the shop owner kindly gave to me for this purpose. This Sterling kit plan seems to include the RCM article on it. Sorry about all the notes and sketches on it, but at least it will make it less than desirable to the e-bay resellers. The plan was in quite a sorry state, and please note the error right down the middle of the fuselage layout. The plan had been taped back together rather badly but its too fragile to fix. Dave"

Quote: "Hi Steve and Mary, I spent some time yesterday cleaning this drawing. It is a typical kit drawing in that it is incomplete, missing some info for the top view but no problem for an experienced modeler, you just know its width from the back of the wing to the nose.
The drawing itself has had a lot of 'travel' and may not be a scan of the original kit supplied drawing. I contacted Dave to be sure if the hand sketches that were removed was OK with him. Gene"

THE Sterling Royal Coachman is not exactly a new kit but, as I was looking for something rugged and quickly built, it appealed to me, in spite of its ugly duckling appearance. And quickly built it certainly is, believe me. One's first impression, on opening the box is: What a lot of wood. This is mainly because of the fully sheeted wings, of course, but one must carefully sort out the sheet wood for its respective uses. The plan is a very comprehensive one - not only is every part shown full-size, but a large number of step by step exploded views leave nothing to guesswork.

The fuselage is built flat on the building board, and is unusual in that the tail unit (all sheet) is built integral with it, thus ensuring its being set at the correct alignment. There is no need to remove the structure from the board until you are ready to fit the undercarriage. This is pre-shaped, the only work required being to solder the streng-thening bar to the main legs. The engine is mounted on the front firewall, without any sort of cowling, the original intention being for a radial mounted engine, which has given me the opportunity to use my OS .19 fixed on a Micro-Accessories nylon mount (the engines specified are .09 to .15 so with my OS .19 I added an extra couple of degrees of downthrust.)

The wings, as mentioned, are completely sheeted and, in fact, are 'built on to the sheet'. All the ribs are from 1/4 in and 3/32 die-cut-sheets. The die-cutting had just a little crunchiness, but pressed out cleanly enough, only a slight touch of sandpaper being needed to make them first class. The sheets for the lower surface of the wing are butt jointed..."

There are certain things that because of their peculiar homeliness attain, paradoxically, a certain attractiveness that is unique unto themselves. We have all witnessed this phenomena with regard to people - particularly with respect to women, who incidentally, are people too. Indeed, the 'ugly syndrome' has created an economic miracle in the guise of a bug-like automobile, the manufacturers of which, not only admit to its classical inelegance, but have pumped millions of advertising dollars into extolling its aesthetic deficiencies. Of course, ugliness in and of itself will not sell - it must be a unique ugliness, a sublime ugliness, a classic ugliness!

Thus we are led to the subject of this month's Field and Bench, Sterling's Royal Coachman, which paralleling its bug-like confrere, also performs its function to a degree which equals in excellence its lack of beauty. When it first appeared as a magazine subject, the Coachman was 'hyped' as an easy to build, durable trainer. It is all of these, and yet, possibly none of them, depending on how you go about attaining the results you desire. Previous to the advent of the Sterling Kit, I built two Coachman from plans. These were flown with equipment which ranged from six channel reeds to GG, with a brief stop at rudder only. More of this later.

I was delighted to have an opportunity to compare my findings with those of Al De Bona, whose building and flying of the Sterling Kit forms the nucleous of this Field and Bench. Al's assignment was to build and fly the Coachman with the F & M Vanguard relay receiver (which he was obliged to convert to relayless), F & M GGI transmitter, and a Rand Pak.

The kit, according to Al, left little to be desired, the wood being of high quality and cleanly cut. Included in Sterling's box were little niceties, such as celastic for wing reinforcement, phenolic engine mount, hinge material, and adequate hardware.

A feature of the Coachman is its all balsa sheet construction which lends ease of construction, durability and, alas, weight. The plans are most complete and a 'blow by blow' is not necessary. A few tips have, however, been passed along by Al and will save some time and some aggravation. The eye bolt method of attaching the nose gear left inadequate room for tightening the bolts due to interference by the hardwood tank platform mount. As an alternative, aluminum straps were successfully utilized. You may well have your own favorite method which will work equally well. In building the wing, extending the ribs on the plan proved easier than attempting to transfer rib positions to the bottom sheeting. Construction proceeded without a hitch.

My own efforts to fly GG with a relay receiver have always resulted in catastrophe due to vibration and/ or loss of centering. It was not until I acquired relayless gear that I was able to fully exploit the potential of GG. Herb Abrams, the 'Rand-man' has recognized the virtues of relayless equipment for use with the Rand actuators and urges the use of such equipment with the Rand Pak (which has a switching circuit built in). Al took heed of Herb's advice and following the instructions of Mr John Cline of F&M adapted the Vanguard receiver for relayless operation with the Rand Pak. The steps were as follows..." 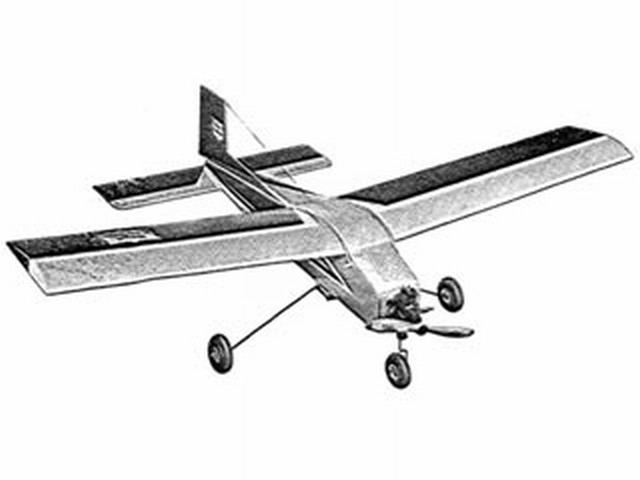