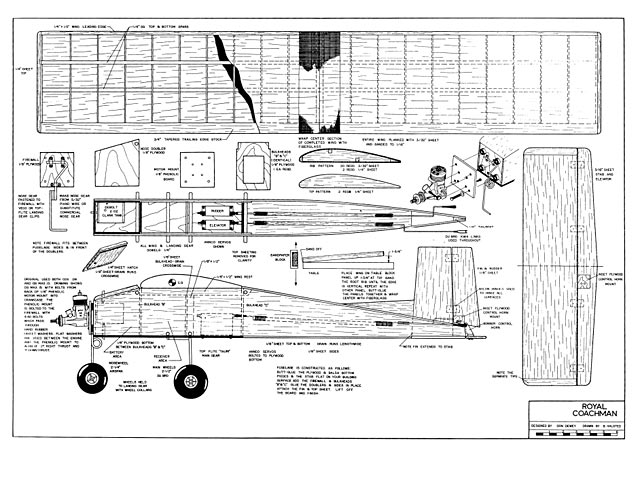 Quote: "There are several ways to discourage a beginner in this hobby and sport - one is to start him out with a ship that takes forever to build, the second is to provide him with a radio system that takes a decade of tinkering to keep in working condition long enough to get to the field.

It has long been this writer's opinion that the ideal combination for the newcomer to R/C would be a ship that could be built in one weekend at a minimum of expense, that would be inherently much stronger than the average model, and that would utilize a maximum of six channels of control.

The Royal Coachman is all of these things - a model that can be completed (less paint) in two evenings, is rugged enough to withstand the initial pilot errors, and designed for rudder and elevator control (motor is optional, we didn't use it) with a six channel reed rig. The author has long felt that the six channel rig offers the beginner the most for the money and will give him many, many months of flying pleasure - with maximum performance and reliability. Our prototype utilized the new Controlaire 6 which can be purchased for $100 and will last until you are ready for the additional controls offered by a ten channel rig or one of the new proportional systems. We purposely designed this model to accommodate two Annco, or Royal servos - both were utilized in the prototype.

A Cox Medallion .09 was used for power and subsequent flight tests proved the Royal Coachman to be an outstanding multi trainer that can be handled by the tyro with an absolute minimum of dual instruction from a more experienced club member.

And then we removed the .09 and installed an OS Max .15 .- the 41 in span ship was now about as docile as a Me 109! If you're a beginner, stick to the .09. It you've past the shaking, quaking stage, dust off the .15 - whatever your choice, you'll find the Royal Coachman offers more flying pleasure with less hassle than any ship you've built.

Design Notes: The Royal Coachman is no raving beauty - it wasn't intended to be. Rather, it was conceived as a fast-building, functional, and serviceable design that could withstand much more abuse than the average multi ship. The design formula itself was taken directly from 'R/C Design Made Easy' by Chuck Cunningham in the March 1965 issue of RCM.

Having selected a 41 in span with a 7-1/2 in chord, which gave us the desired 5.5:1 aspect ratio, we arrived at the airfoil configuration in a most scientific manner - we hunted through a stack of old model magazines until we found one that was the right size! A Cox Medallion .09 was selected for its availability, cost and dependability.

Insofar as the construction goes, the Royal Coachman is all-sheet throughout. Standard sheet and strip sizes have been used, and all accessory items are readily available. Silk covering is optional - it depends on whether you habitually land on the strip or in the trees. The prototype was completely silk covered although it is not at all necessary. (I keep telling myself it was only to find out how much weight it would add!).

Construction: The majority of construction articles advise the builder to begin with the wing. This is done for two reasons - first, most modelers dislike building wings; secondly open structure, silk covered wings take time for the dope to completely cure. Since this is all sheet and nothing has to cure, we'll start with the fuselage..."

Quote: "Attached is an article on Don Dewey’s Royal Coachman, 37 years later. It was written by Jim Pearson on the Royal Coachman, following the death of Don Dewey. I built two of the Royal Coachman from the plans in RCM, and it was a wonderful airplane. It would be a great airplane today upgrading to an electric outrunner, and with ailerons. Please stay safe and stay healthy," 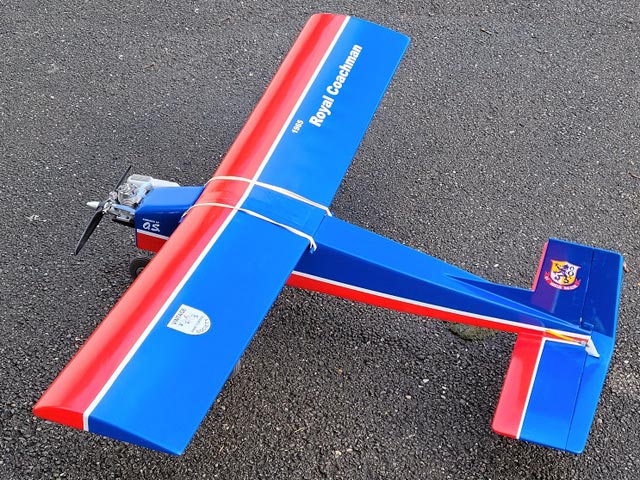 Doh. Have moved the recently added kit review across to Royal Coachman (oz9845). My mistake.
SteveWMD - 22/01/2021
Hello, attached photos [main pic, 008] of my latest build, a Royal Coachman. OS 15 for power and a silkspan and dope finish. Cheers,
Scott Wallace - 16/11/2021
Hi, I've just built and flown Don Dewy's Royal Coachman [pics 009-012], the 1965 version, plans published in RCM magazine. I've stayed close to the original design, but, I changed the wing construction, not the shape, to save on the cost of, and the amount of balsa used, I moved the rear spar forward under the upper spar and only sheeted the upper D-Box, then put cap strips top and bottom on all the ribs, I used ply dihedral braces instead fiber glass to join the wings. Power is an OS Max 15 with right and down thrust built into the firewall. So far, after only 6 flights the Coachman fly's great, still needs a little more trimming, more down thrust and CG adjust, but, I do love flying her, my favorite flier at the moment. Many thanks Outerzone for your vast selection of plans. Cheers,
Dave W - 04/02/2022
Good morning again, I'm attaching some photos that might be worth adding to some of the plan files. Just in case it's not obvious, two of the pictures are attempts to 'recreate' the Don Dewey picture from the original build article. I hope that you can use them. The first photo [pic 013] with Kelsey B shows the Royal Coachman I built in 2008 for the RCM contest. Second [pic 014] is the Royal Coachman that I built this year, for the Vintage RC Society theme airplane, this was from Outerzone plans. Third [pic 015] from 2008 with two models together, shows my Royal Coachman and Kelsey's father Steve Barnett's.
RayS - 12/05/2022
Add a comment