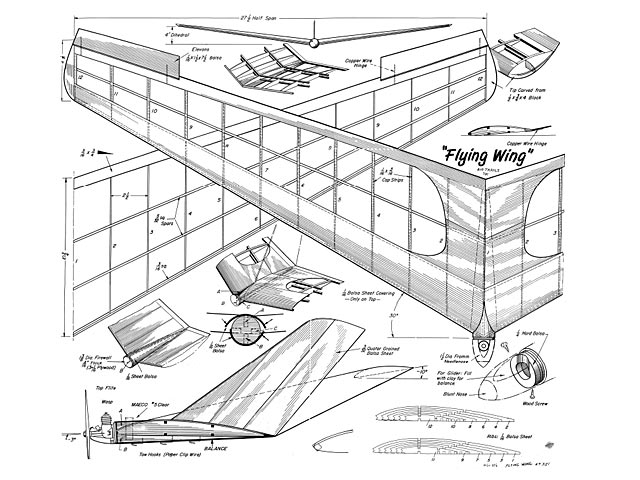 The basic problem of the Flying Wing is longitudinal stability. When the angle of attack is increased on a standard airfoil like the Clark Y, the center of lift moves forward, tending to increase the angle of attack until the wing stalls. On standard designs, the stabilizer prevents the wing from doing that.

By using a special airfoil, which has a reflex or turned-up trailing 'edge, the center of lift remains at the same point, or it may actually move backward and so introduce a stabilizing moment.

The stabilizing action of the reflex trailing edge airfoil can be visualized by assuming that the airfoil consists of two sections: a front portion which does the lifting, and a rear portion which takes care of the stabilizing. A check on the center of lift position of the reflex air foil will show it to be about 22% of the chord in contrast to 35% on regular airfoils. This could mean that most of the lift comes from the front portion. We might go further and cut a reflex section into two pieces so that front will be two-thirds of the total, and the rear one-third. If we leave a slight gap between the two sections, the arrangement will be similar to a very close-coupled standard wing-stabilizer layout. The reflex trailing edge will be equivalent to a negative stabilizer.

Knowing that a Flying Wing is nothing else than a close-coupled arrangement of wing and stabilizer, we do not have to use reflex airfoils to obtain longitudinal stability. We can use airfoils like Clark Y for major lifting requirements, and add the necessary stability area where it will do most good. But we won't have a true Flying Wing.

By using an extremely pronounced reflex on the trailing edge, it is possible, without using sweepback, to make a Flying Wing that will look like a plank. However, such designs are limited to gliding or to flying speeds just above the glide. Increase of speed beyond this point would introduce looping.

The lift capabilities of reflex airfoils are much lower than those of the Clark Y type. This means that, area for area, Clark Y will lift more. Therefore, there is no loss of efficiency if we do use a Clark Y in combination with a non-lifting stabilizing area. By employing Clark Y in combination with a sweepback, it is possible to obtain a stable model by having tips set at a negative angle..." 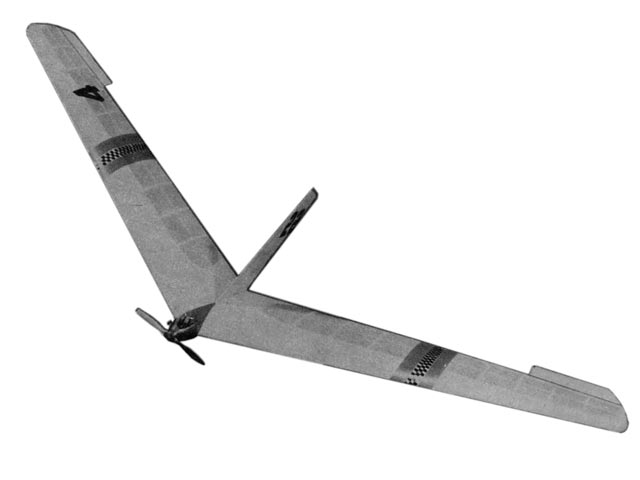 A slightly modified 'Flying Wing' [pics 004,005]. I have built the wing according to the plan here on Outerzone. The fuselage I have built without any plan to accommodate the powertrain and radio control.
TomasD - 14/09/2020
A powered flying wing that’s not a speed demon is a rare find. This is one of them. Take a look at Retro RC’s kit offering of this Air Trails 1951 Flying Wing in this video review by Model Aviation magazine, posted in August 2020: https://youtu.be/HlULNMVtYvI
AaronKV - 31/05/2021
Some pics of the 1951 Flying Wing [pic 006,007]. Scratch built from OuterZone Plans. Build front to handle a Norvel tank mount with a throttle sleeve Cox TD .049. Sweet flyer.
Steve Staples - 12/11/2021
Hi Steve and Mary, I have been busy building models from your excellent plan emporium. Here is my latest, the Flying Wing [pics 008, 009]. It is an RC and electric conversion. What a great model! It flys slowly when you want, but speeds up when you put the nose down! Amazing for a model from the fifties. Photos from a cold Scotland, but we fly whatever the weather here. You are running a great web site Keep up the good work!
Chris Royce - 28/02/2022
Add a comment