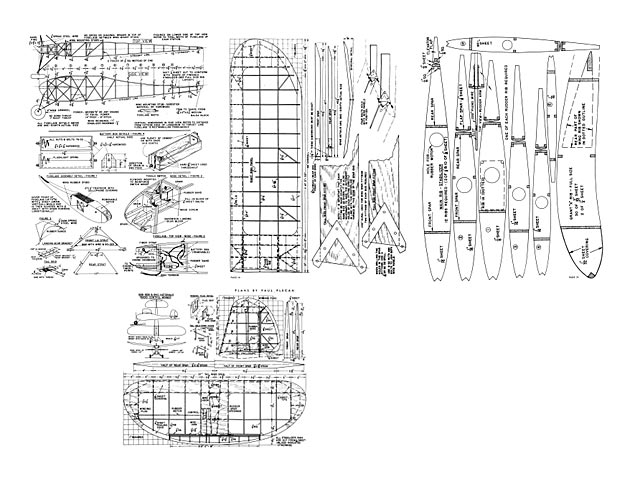 Note this is not a fullsize plan, this is a scan of the drawings as they were originally printed in the pages of the magazine, in 1940.

Quote: "RADIO control of a model plane is a new and fascinating hobby. Every modeler dreams of controlling his own models, and it is hoped his enthusiasm will be livened by the presentation of this thoroughly proved radio-guided model. Over one hundred and fifty flights have been executed with the equipment described, so only those things which have been tried and found successful will be included. In many of these flights the plane was returned to within a few feet of the take-off - and that's a real thrill, especially when you are doing the controlling.

The present ship carries two controls, rudder and elevator. It is suggested, however, that a rudder control alone is an adequate beginning. Complications arising from two controls are apt to be discouraging. Interestingly enough, the 1939 Nationals were won using only the rudder control. Simplicity is the keynote throughout the entire construction. Most modelers yearn for the supercomplete complex radio job. Try a simple one first.

Several years of experimentation have shown that the ship itself is as important as the radio unit it carries. Naturally, the weight must be carried easily. The glide and power flight speeds should be nearly equal - to give the same response to control under both conditions. Side-area considerations result in good turns to right and left. And finally, properly sized control areas are indeed essential.

In spite of its largeness this ship is powered with a 1/5 hp Brown motor. It may be noted the ship has the same characteristic fuselage shape as the author's Guff. This seems to aid the spiral stability.

FUSELAGE: The body is of the strong semibox construction, covered with sheet balsa. Enlarge the drawings to full size on a strip of shelf paper, making sure the wing angles are correct. Find a large space (the body's over 5-1/2 feet long!) to work, and tack the plans to a soft board. Build the two sides, one on top of the other, of 1/4 in square, hard balsa. Remember, the right side has a door, the left hasn't.

Assemble the sides in two steps. Invert the two sides and pin the wing-mount portion to the board, gluing in all cross braces forward of the back wing stub. With the body right side up, pin the rear bottom portion of the fuselage to the board and put in the remaining braces. Several coats of glue on all joints is now (rather now than later) advisable. Place diagonals (not shown in drawing) of 1/4 in square across the body at Stations 5, 8 and 11.

The tail wing cradle is made of soft ye sheet shaped to the rib outline. Since the cradle determines the angle of the tail wing, follow the dimensions carefully. The tip of the body is carved from a soft balsa block and glued in place.

Hardwood motor mounts are glued in place with the aid of the fill-in blocks shown in Fig.2. The whole front of Station 1 is covered with 1/4 in sheet balsa. Station 2 is also filled in, isolating the ignition equipment from the radio compartment. The nose sides are two layers of soft 1/4 in sheet... " 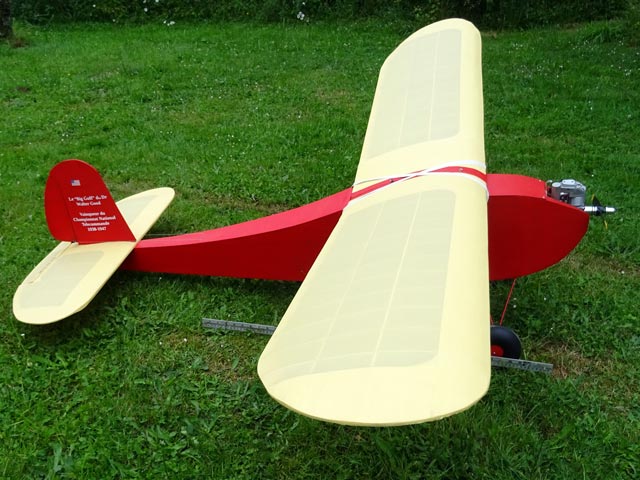 Hi Mary, Attached a few pictures of the Big Guff I finished last year [main pic, 007-013]. Took me 14 months to build it! I built it from a short kit provided by Laser Design Services. It is fitted with a Laser 70 but an OS 52 FS or similar will probably fly it. The inscription on the fin is repeated in French because I live in France. Note the 1 metre rule in the first picture to give some idea of the size of the model. Happy Landings,
David Davis - 03/02/2021
Hello Mary and Steve, Just a little story concerning the Big Guff last Sunday.
Valentines Day dawned sunny and calm, perfect flying weather here in central France. I knew that I would have a few novices to teach this afternoon so I checked the 2200 3S Lipos which I use in a four channel foamy trainer. Three needed charging. I selected one, put it on a 1C charge and left the charger, a Hobby King X 120 to charge it up. At some stage later I noticed that two of the cells appeared to be nearly fully charged but that the third was still quite low.
I was busy deep cleaning the kitchen, the dishwasher was on and I put some dirty clothes in the washing machine. I had been stripping wallpaper in the hall and I thought I'd use the steam stripper to attack some grease which had built up on the tiles behind the hob. I thought that I could smell burning plastic but I paid it no mind and thought that it was probably something to do with me using all of that electricity. I went for a shave and a shower and changed into some nice clothes to go to Aigurande to buy a bottle of pétillant to celebrate St Valentine's Day. My beloved and I are in different countries but we had planned to talk tonight on Messenger and to celebrate St Valentine's Day with two bottles of fizz.
I picked up another battery feeling that the first would be charged by now and opened the cellar door to be greeted by *Thick Black Smoke!* I ran down to the underground garage which is attached to the workshop and opened the connecting door. I was greeted by the sight of thick smoke and several fires blazing away. I had some idea of what must have happened so switched off the power to the sockets and a few buckets of water soon got rid of the fires but my beautiful Big Guff has been reduced to ashes, fourteen months of work literally up in smoke, likewise the WOT 4 XL. That's two I won't be taking back to England.
I phoned Trish and told her what had happened. She said that we'd build a new fuselage together. I'm not that keen but just think what would have happened if I had gone to Aigurande. I would not only have lost some models I may have lost the house too.
I'll admit that I am not really that interested in electric flight, I much prefer the beat of a well-tuned fourstroke, and in the past I have been quite cavalier in my attitude to charging LiPos often leaving them on a 1C charge before going to bed but I'll be more careful in the future. I'll be getting rid of old LiPos too!
Trish has said that she will help me build a new tailplane and fuselage and a club colleague, Guy Auvieux has also offered to help.
Pictures of the Big Guff and WOT 4 XL in former times and what's left of them now [014-017]. Happy Landings,
David Davis - 20/02/2021
If one is interested in building this R/C Guff, I would recommend the article and plan in the Dec 1988 issue of Model Builder Magazine, see RC Guff (oz4652).
Tom - 25/04/2021
Add a comment