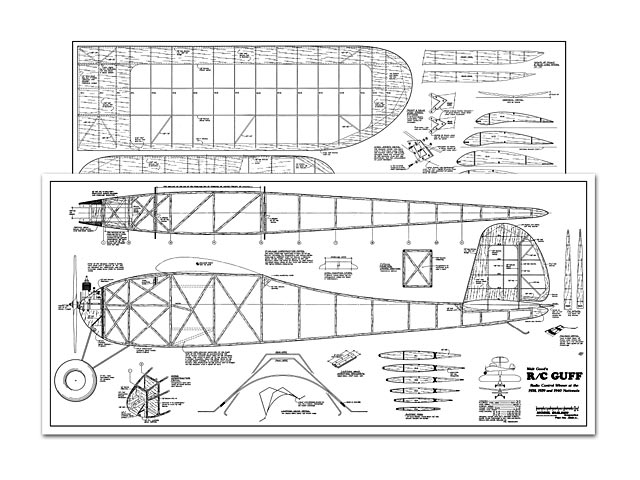 Note this plan has been scanned with a central band missing, on both sheets. Also, the text is completely unreadable. If anyone can submit a clearer (and complete) scan, that would be great [fixed now, see update].

Quote: "Building the R/C Guff. If you've been following our series on the history of Walt Good's landmark R/C model, then you are primed and ready for the complete construction article presented here.

As I promised in the August '88 issue when introducing this series on Walt and Bill Good's history-making model, the RC Guff, we are concluding with this presentation of the construction article for the plane itself.

The plans have been drawn by Phil Bernhardt directly from the original presentation in the November 1940 issue of a three-part series in Air Trails magazine. Although some sketches and details of items, such as battery boxes, radio installation, ignition wiring, etc, have been deleted, the structural design has been totally unaltered. In fact, numerous telephone calls were made to Walt as the drawings progressed, making sure that all structure was correct and that no mistakes in the original presentation were being carried through to this new set of drawings.

Note that several photos revealed that Walt, the builder, had laboriously cut lightening holes in the wing ribs, though this is not indicated on the drawings. Why? Because Walt saved all of the cutout disks and found that the whole batch only weighed half an ounce, hardly worth all the effort to reduce weight!

Speaking of ribs, the original wing was built with three-piece ribs, as the spars were full depth. Unless you're a real masochist, there no need to go through this exercise, as Phil has shown an alternate wing construction following the modern I-beam method, using top and bottom 'cap' spars with vertical-grain webbing.

Most modelers only read the instructions as a last resort, when all else fails; but we felt that, for old time's sake, we would reproduce the majority of the original introduction and building instructions. Except for modern adhesives and hardware, it's really not all that different. If you notice any discrepancies in wood sizes, etc, stick with the plans. And remember, the original aircraft weighed a little over eight pounds, complete with radio, and still managed to fly with a Brown Jr ignition engine, a power source that is about the equivalent of a modern .29 two-stroke glow engine. Granted, it usually needed manual assistance during takeoff, so you may want to use a .40 two-stroke or a slightly larger four-stroke, but keep it at that. This was a slow and majestic aircraft that made history. It's not Rodney Dangerfield; treat it with respect..."

Update 24/10/2021: Replaced this plan with a clearer copy, thanks to BrianCox. This fixes the previously missing central banding, also the text is readable throughout. A great improvement. 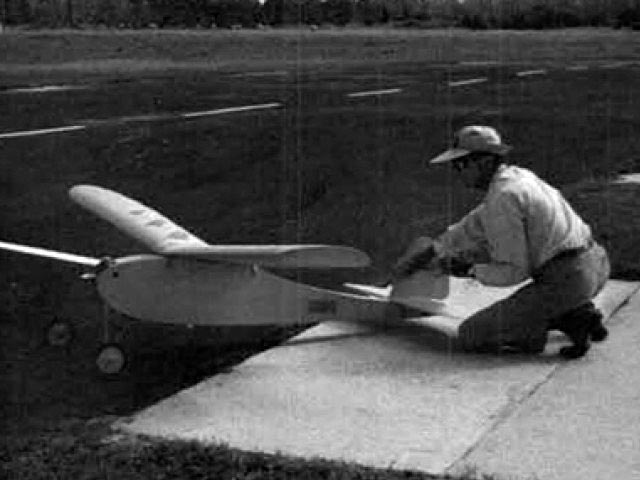