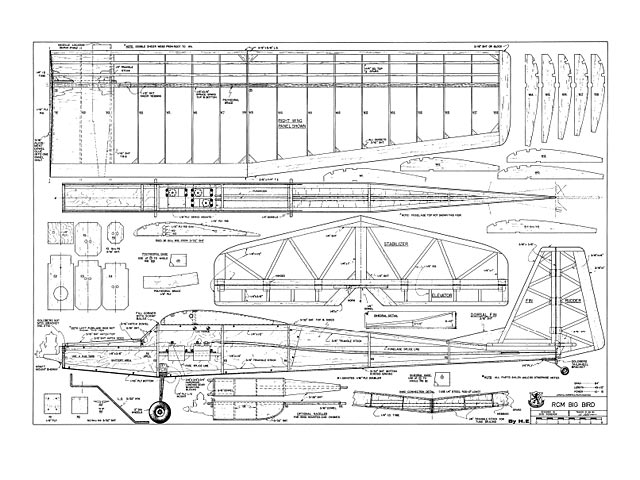 Quote: "The RCM Big Bird was conceived from the realization that we did not have an aircraft design to meet a much needed requirement. From the hundered of plans that we have available, what could be missing?

It happens to be a powered aircraft that could be recommended as the first radio controlled airplane project, particularly for a person who either does not have, or does not want an experienced RC'er to assist him.

We are thoroughly aware of modelers who will assemble their first aircraft and go out alone to make their very first R/C flight. The probability of success on this first unaided attempt is very low with the majority of the trainer type aircraft.

Dozens of trainers are available with varying degrees of complexity of construction. The Big Bird is simple to assemble even though there are a goodly number of detail parts. It was designed in this manner in order to keep it light yet strong, as weight is a key factor in the Big Bird concept.

Our approach is to combine low weight with generous wing area and a small throttle equipped engine to obtain a forgiving, slow flying aircraft. This allows the new pilot ample time to correct his mistakes before the craft smashes into the ground. In fact, with the craft at a reasonable altitude, if the pilot has managed to get the airplane into an awkward situation, he merely has to throttle back the engine, return controls to neutral, and the ship will right itself.

There are those people who will immediately say that the RCM Big Bird is a powered sailplane with a landing gear. Well, it is, in a way. The wing is a shortened version of the Bridi Big Birdy sailplane wing. The fuselage, however, is pure airplane, designed to be easy to build and rugged enough to withstand lots of abuse. The sturdy landing gear is usually found on aircraft weighing twice as much as the Big Bird.

The rank beginners aren't the only ones who can enjoy the Big Bird - several of our experienced flying friends have had a ball with it. Unbelievably small consecutive loops, tight turns, and wallowing barrel rolls, all in slow motion, have brought on lots of giggles. Because it is difficult for some of us to play a straight game, we dreamed up the engine pods for Cox .049 QRC engines to strap on the wings and have lots of fun with the phony Ford Tri-motor approach. Somehow we feel that having fun is what R/C is all about..."

Update 20/04/2017: Added PDFvector format modern redrawn plan by hogal, thanks to Balsaworkbench. Also useful for the Big Bird Too oz6220. 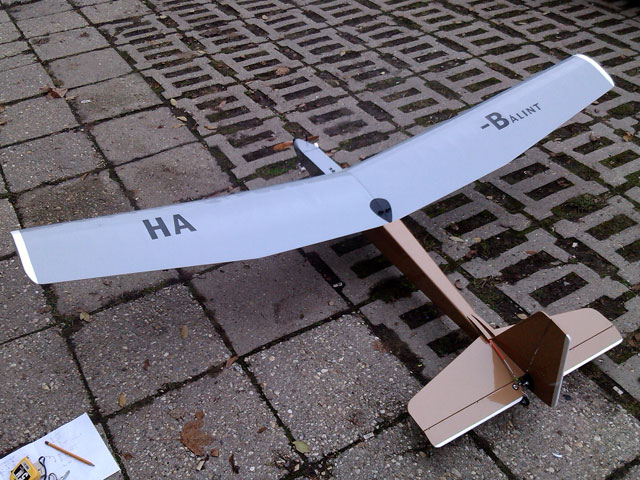 I created a bunch of files to cut laser kits for the RCM Big Bird and Big Bird II. This was a few months ago, and now I'm looking at the files because I want to build a plane, and I notice that the existing body of available plans for the RCM Big Bird and Big Bird Too is a mishmash. The scans featured on Outerzone are a magazine blow up for the original Big Bird, and a really distorted scan of a full scale plan for the Big Bird Too oz6220. There is a CAD-generated combined plan available that shows both airplanes, but I do not see this file on Outerzone. I'll attach it to this email so you can make it available. Its dimensions deviate considerably from the other two plans. Unfortunately I do not know which one to believe, and I suspect that all of them are incorrect. It does not help matters that the dimensions quoted in the magazine articles do not match any of the three plans. For instance, the overall fuselage length of the BB and the BBToo are quoted as 54.25 and 54.5 respectively. From the tip of the rudder to the firewall, my drafting program says 49.75 and 50.5 from the Outerzone downloads. The combined CAD plan has this dimension as 49.75 and 48.75. To complicate the issue, RCM was apparently not on the ball at the time. Total wing area is quoted at 1360 square inches on the first plane, and 900 on the second, even though the article says they used the original wing for the second plane. I understand that your main role is historian, and I appreciate that. Unfortunately, things get complicated when I cut stuff out on my laser cutter and it doesn't match the plan that somebody has printed out for their building project. The scans currently on Outerzone are both inaccurate in their own ways. Whether the combined CAD drawing is correct is anybody's guess. I figure if you make it available as a download for both planes, at least we can all work from something that has straight lines, and we'll all have the same drawing. Thanks a lot for everything you do. I appreciate it.
Balsaworkbench - 20/04/2017
Excellent, thanks for this. If I was about to build one of these, I'd certainly start with hogal's plan. Less to go wrong, I think.
SteveWMD - 20/04/2017
The Big Bird was constructed with a bigger engine, and the self-made landing gear (strut) was not good in function; I changed it to a carbon strut. It has separatable wings, and stearable tail wheel [model photo & more pics 003-007].
Krisztian_Halmai - 28/01/2019
Add a comment