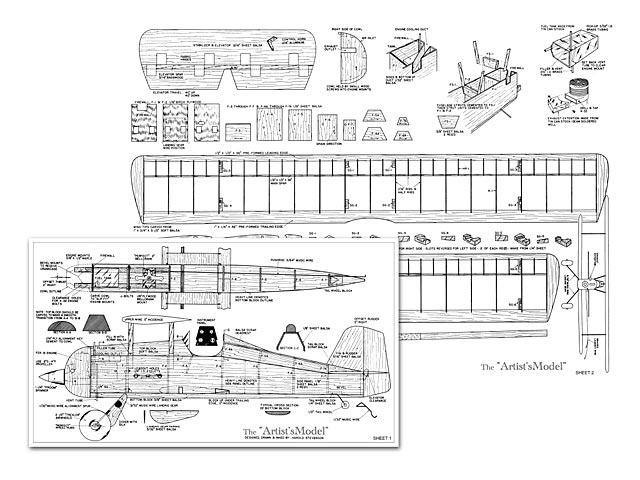 Quote: "She's got classic measurements and configuration, she moves with grace and beauty. What does a former hot-shot control line speed flyer do when he shifts over to the easy life? Builds low-and-slow biplanes! The Artist's Model by Harold Stevenson.

When the rigors of scampering around the pylon begin to catch up and it's just a little more than a chore to turn a 1.8 second lap, some old speed fliers turn to radio control. In the writer's case, while holding nothing against radio, the appeal of control line is still strong and just plain old flying-for-fun is the order of the day. Thus, this biplane came into being.

This little ship was designed with a nostalgic feeling for the classic bipe of the 1930's. It doesn't claim to be anything more than a heck of a lot of fun to fly. For those so inclined, the model will fly a modest stunt pattern and will perform well in any of the novelty events such as balloon bursting. With a bit of enterprise it could even be con-verted to radio control.

So if you want a good, dependable, scale-like airplane to fly on those Sun-days-between contests, just for relaxa-tion, perhaps The Artist's Model is for you.

Begin construction by cutting to shape from the appropriate stock all fuselage formers, wing ribs, dihedral gussets, struts and strut gussets. It's a good idea to store these small parts in a box to be used as needed during construction.

Next cut the motor mounts to size, drill for engine bolts and bolt the engine to the mounts allowing for the two de-grees right thrust. Slip the plywood fire-wall and formers F-1 and F-2 on the mounts, align and cement them in place. Double cement each joint. While this assembly is drying, from 3/8 in hard sheet balsa cut the fuselage bottom block to shape. Remove the engine from the mounts and cement the mount assembly in position on the fuselage bottom block.

At this point it is necessary to construct the lower wing, since it is an integral part of the fuselage. The wing construction and assembly is standard procedure and fully indicated on the plans. It is good practice to build the wing flat on the work bench, blocking up under the leading and trailing edges to assure warp free alignment..." 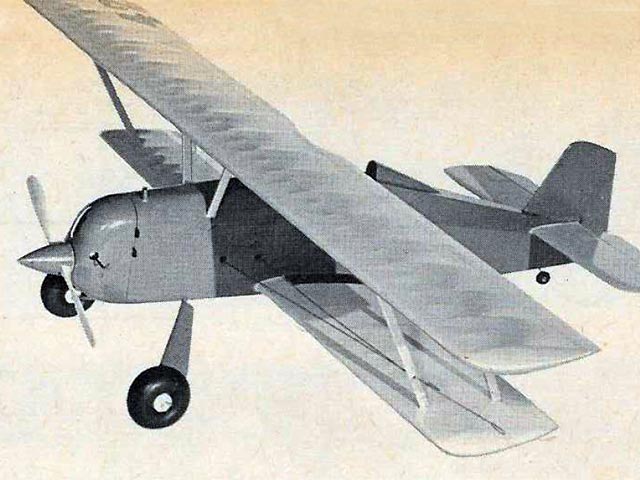