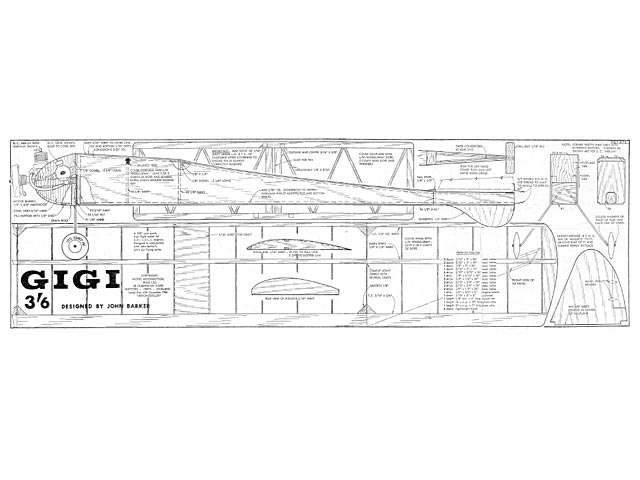 Quote: "She may have straight sides but this GiGi is no slouch when It comes to performance for the sportster, in our view John Barker's latest creation is a perfect power mate for his earlier and very popular LuLu (oz1082) glider.

GiGi has been deeisgned as the minimum piece of equipment to get a motor safely and pleasantly into the air! It has several features which are valuable to the beginner, which may be disguised by its stark simplicity. Firstly, it has a low wing loading which makes it simple to trim and gives a good glide which ensures soft landings. Secondly, the motor assembly is stuck on to the front of the fuselage. This is amply strong for all normal flying and helps to prevent damage to the motor in a bad crash, and probably the rest of the fuselage, by breaking off cleanly. Thirdly, it is very simple. The author strongly dislikes flying without an engine timer but, bearing in mind cost and the fact that most commercial timers do not run long enough for a model of this type, none was fitted. To compensate for this the tank is placed outside where it can be seen until the moment of launch. Also a dethermalizer is fitted and should be set in most weathers. This gives much better chance of recovery in the event of an over-run. The undercarriage is not just decoration. Take offs are a pleasure that had fellow clubsters yearning for the old days of ROG contest and it does allow the model to be placed on the ground for starting the motor.

Construction is very simple but a few notes may be helpful particularly as far as the sequence is concerned.

It is best to start by building the wing and tail-plane as the motor position can then be adjusted to give the best balance. The wing follows the usual method of building the centre panel over the plan and then propping up the centre whilst the tips are built on in turn at the correct dihedral angle. One point about this method which is not usually stressed is that the propping up must be done accurately otherwise the wing will be warped. The tailplane may look weak and prone to warp but in fact if built true and covered evenly the structure is balanced and tailplanes of this type will stay flat for years. The thin strip of tissue is removed from the centre of the tailplane, for fitting the fin, after doping.

Commence building the fuselage by taking two lengths of bearer material of a greater length than will finally be required. Drill these, bolt the motor in place, and measure the width across the bearers. The formers may now be cut to suit the bearer width. Former F1 is the same width, and formers F2, F3, F4 and F5 are 3/16 in more than the width across the bearers. Bend the undercarriage wire and fix it to F2 either with Araldite, as used on the original, or make some small holes in the former and sew in place with strong thread..."

Article page, text and pics, thanks to KenSmith. 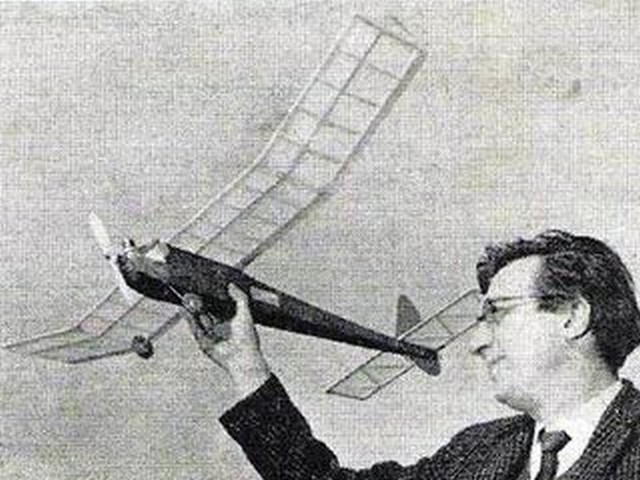 Hi, I have 'Aeromodellers' from the 60s and built this model with my dad in mid 60s. It was easy to trim and fly. Attached is a scan of the build article in the magazine to associate with the plan. hope it helps, regards,
KenSmith - 23/10/2014
Hi Steve, and thanks Ken for your comment. I built one of these in the late 60’s or early 70’s and enjoyed flying it. At times I would give away a model some times complete with engine to a young keen person to get them started because they where still at school and this with help were a big plus. I gave away my GIGI to one such person. Cheers Steve and to all who add plans are a big part of OUTER ZONE. Kind Regards,
Gary - 26/10/2014
Add a comment