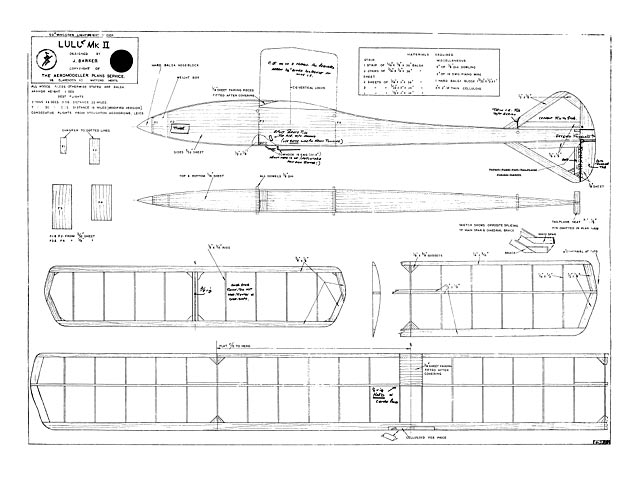 Quote: "A 50 inch span lightweight contest glider that can be constructed in approximately 4 hours. Lulu, by J Barker.

The machine is a contest type and as such will probably be required to be built rapidly. Following the method outlined below, the first two I built took 4 hours apiece to build, which is a reasonable time.

Fuselage. Cut the sides out of 3/32 sheet both together then join by formers F3 and F4. Pull in tail and nose and insert other formers. Bend tow hook from 16 swg, and fix with strap. Note that tow hook requires no binding and is accessible if it comes loose on comp days. Add wing and tailplane dowels, tailplane seat and the celluloid tube at rear of body. The tail fixing passes through this tube and gives a neater, easier fixing..." 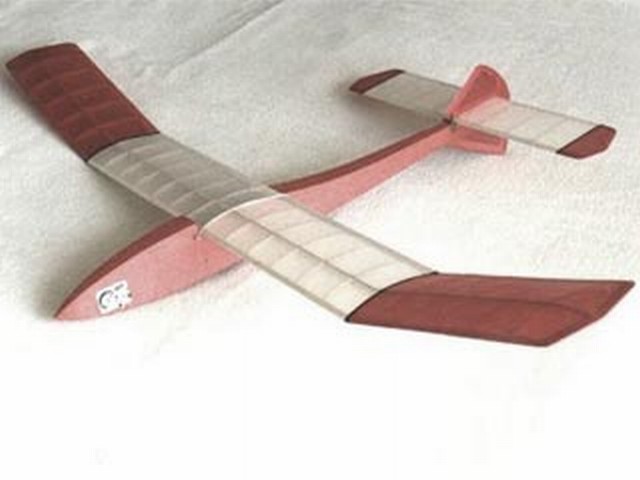 First ever model I built that did an out of sight flight. Did not know whether to be please or upset. It flew a dream. Got it back weeks later after it had been out in the weather - ruined. I was 15. Now very, very, very, many years later I am looking to build another one to start doing some aeromodelling again.
DaveBradbury - 14/08/2013
Lulu designer John Barker was a club mate of mine in Cheshire for a good number of years and his simple yet radical approach to model design always impressed me. He was very young when he created the Lulu in 1949 and it is one of those models whose simplicity is deceptive and is belied by it's surprising performance potential - this as a F/F model of course. I did have a free-flight one way back and only kept it for a couple of months before it was wafted away in a thermal. Last year I decided that, with the addition of radio and a small out runner it would make a nice self-launching small field soarer and the orange and black model shown in the photos [more pics 003, 004] has proved the point, with rudder and all moving tailplane control it is a delight to fly. Power is a little BRC 1811 motor running on a 2S 450 lipo and driving a GWS 6 x 3 prop, enough for very decent climb and the glide is, like the originals, excellent, even at the higher weight. The only major modification to the original (apart from the rudder and AMT) was to make the centre wing spar from spruce/balsa/spruce laminations.
Sundancer - 28/03/2016
I saw your anniversary Photo album which I found fascinating. It was great to see pics of many of the old models of my childhood that I had read about, but never seen, I clock up 81 circumnavigations of the sun next July! Over the years, I have built a fair number of models and now that I have discovered that Outerzone is collecting photos, I will try and find time to upload some of mine where they would appear to be applicable. I have attached one to start the ball rolling: the Lulu glider needs no intro, it was an excellent flier [more pics 005].
MikeWight - 04/04/2016
While serving in the Regular RAF, I flew my Lulu to 3rd place in the RAF Championships at RAF Ternhill, in, I think,July, 1951. She was a superb performer. Strongly tempted now to build another, with lightweight electric, and radio gear !
Eric Humphrey - 20/01/2021
Add a comment