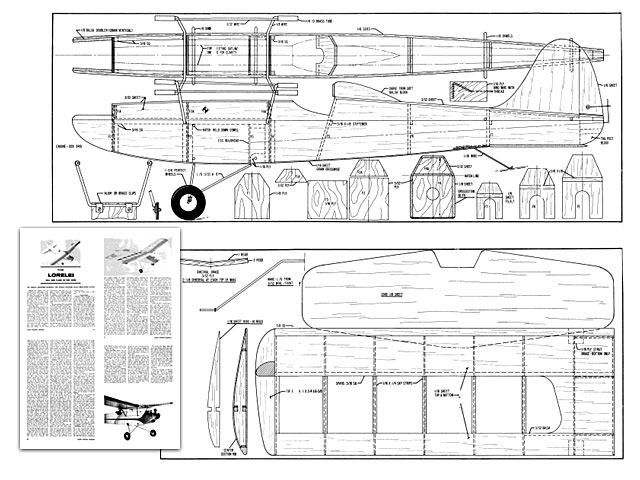 Quote: "Although R/C Modeler does not normally present staff designs as feature construction articles, this particular plane, the Lorelei, was the result of a two-fold assignment - to evolve a small RC model that was designed specifically for the beginner, and one that would serve as a test ship for the single channel versions of RCM's Convertible Superhet Receiver, presented in this issue.

Certain inflexible pre-requisites were established before actual design work could be commenced. The first was that the model must be designed so as to be presented full size within the physical limits of the magazine itself, eliminating the necessity for ordering plans by mail. In this respect, however, the model was not to be of the sub-miniature, or novelty, class, but rather an easy-to-build conventional sized model in the mild .049 category that would incorporate stability, a light wing loading, and slow flying characteristics.

The ship had to be light, yet rugged - designed primarily for flying out of rough, small fields. In addition, it had to look like an airplane. Absolutely verboten was the slab-sided, sheeted cabin, high wing monoplane that has dominated the single channel sport field for so many years.

The actual design effort was tackled by RCM's Tech Editor and Editor at a late midnite session. Since the cabin-type monoplane was ruled out, the first consideration was for a biplane. This idea was discarded due to the poor flying characteristics of most single channel bipes, along with the fact that rough fields wreak havoc with the lower wing. After a few preliminary sketches, plus an evaluation of the pre-requisites established, it was decided to pattern the model after some of the early light-planes of the home built variety - a parasol wing, open cockpit, long nose and tail moments, plus conventional gear. Thus, the Lorelei began to take shape.

Construction: General Notes: Although this is an extremely simple model to build for the more experienced RC'er, no model is simple for the beginner. One thing to remember is that many a crash could have been avoided if attention had been paid to good building practices and to the small details that go into the construction of every model.

The building surface itself is of prime importance. Every construction article informs the modeler to use a flat surface - a flat surface does not always turn out to be a true surface. We strongly recommend the use of a Magna-Jig for all building projects. As an alternate, take a trip to your local lumber yard and purchase a hollow-core door for a building surface. This can be hinged in the middle to serve as a dihedral jig, if you so desire..." 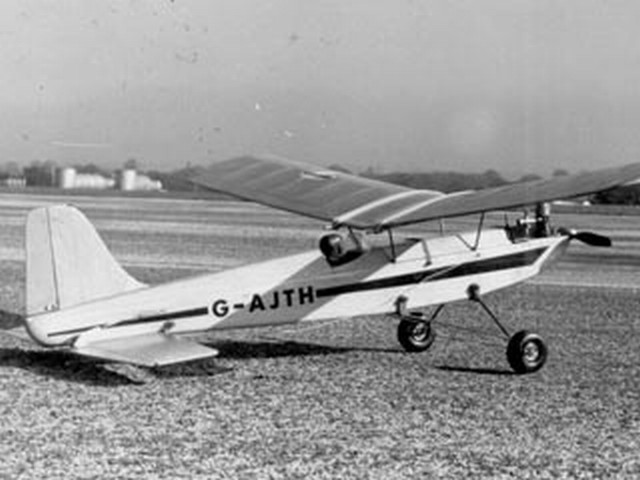 Here is a Lorelei (post 7375 in the Vintage Plans thread) built way back in the 70's by my flying buddy the late John Harrison [main pic]. The model is still in existence and is in the possession of John's son. Powered by an original Mills 0.75 with rudder/elevator control, it was/is a delightful, realistic, flyer. A very nice and straightforward build, a version with current lightweight radio and electric power could be built lighter than the 20 ounces which this one weighs, and would make a very pleasant sport model.
Sundancer - 30/06/2012
Add a comment