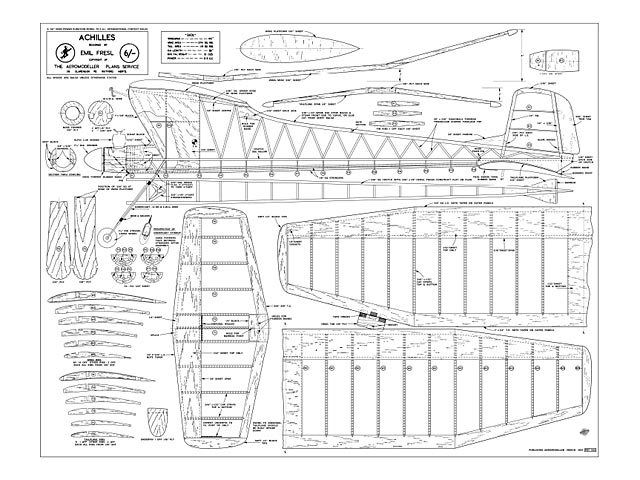 Quote: "TOP place as land or seaplane in the Yugoslavian National contests, and a three year record of continuous high placings, forms the contest back-ground to this outstanding design. Emil Fresi is now internationally renowned as a regular representative of his country in Wakefield and Power finals, and needs no introduction for the contest-minded reader. He adheres to the power design formula originated by American Leon Shulman, whose Banshee (oz1192) and Zoomer (oz1636) achieved fame in the '46-'49 seasons, and in Achilles, Emil adds the many detail improvements we have come to expect from his ingenious countrymen.

High wing and tail angles, with built-in pylon fuselage and single wheel undercarriage give it the Shulman stamp. Gone is the symmetrical tailplane, and in its place, an anhedralled tail with novel dethermalising tip arrangement allows safe trim and gives better performance. Gone is the extreme dihedral, and added is the drag tab for glide turn. These, and many another structural feature, go to make Achilles one of the neatest FAI power designs it has been our pleasure to witness, and we venture to suggest that its reputation for 'in the groove' power flight pattern will make it extremely popular with all power fans.

Construction is robust and practical - the fuselage being built on the crutch system, with F2 and F3 installed first, then the wing platform, the spine, and the diagonals. This can be completed over the crutch plan on the building board, with the front portion overhanging the edge. Planking, underside stringers and formers, engine, timer and tank installation follow, then the fin is added, with ply bracing plates at the, leading edge joint. Tail and wing structure are conventional, except that the spars are assembled first and each panel built in turn over the plan. All ribs are cap stripped top and bottom, and the tail must be built upside down because of its anhedral.

Initial glide tests with the CG at 56% Chord and rudder 3° to the left, should produce a shallow descent with very slight left turn. Try, an 8 seconds power run at half revs, and check the power turn which should be to the right rather than left..."

Update 20/02/2019: Replaced this plan with a clearer copy (patterned background removed) thanks to TonyP. 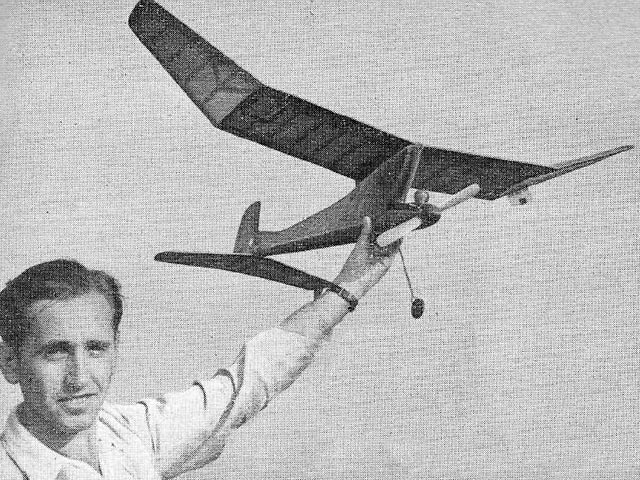