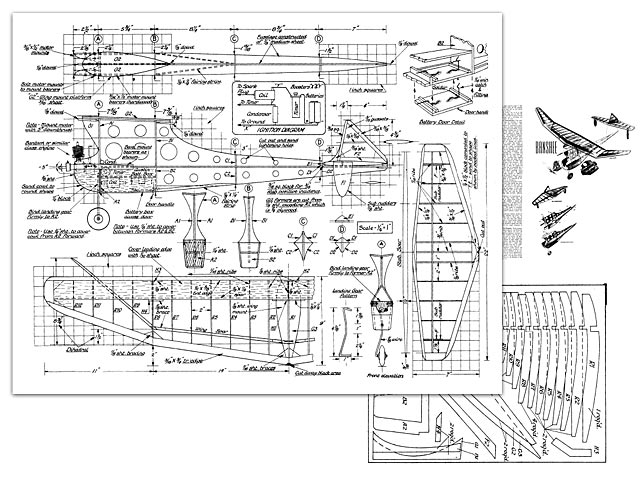 While the Banshee is a comparatively old model in years (the design was developed in 1941), it still is far ahead of all the models to date. The climb, we can safely state, is the fastest we have ever seen. The altitude gained in this climb guaranteed an out-of-sight flight every time the model was flown.

THE Banshee, with its weird, high-pitched wail, has astonished many a builder with its extremely fast climb and surprisingly flat glide. The Banshee has entered only two meets (you know, the war and all that) but it won both with the longest, most consistent flights of the meet. The best performance was turned in with three flights of six minutes each, all official.

The present Banshee design was achieved after several experiments with a rudderless design that would. be spin-proof. This design featured a stabilizer that was one-half the wing area and was of the inverted polyhedral type. After several modifications, this type of stabilizer was laid aside and the present, conventional type used. The Banshee has proven to be more stable and more consistent in flight in its present form than the present-day designs. This can be attributed to its force arrangement and clean design.

Theory: The theory upon which the Banshee is based, has been proven practical by past designs. Past experience has shown that a low wing loading is one of the most important factors that can induce long, contest-winning flights. This requirement was given prime consideration in the design, with the existing AMA rules kept in mind.

To allow the finished design to climb exceptionally fast for the power used, and to permit flat glide as well, demanded that the frontal area of the model be as small as possible. Few designers take the frontal area into consideration. I can safely state that frontal area, wing loading, and power loading are the three factors which directly determine the qualities of a sound design. The smaller each is in quantity the more efficient the model. The frontal area of the Banshee was kept to a minimum by careful design of all three components of the plane. The wing was designed using an exceptionally thin and stable airfoil with a simple and sturdy construction, light in weight. The fuselage was to have an exceptionally clean curvature which, along with its small frontal area, would disturb as little air as possible in its forward flight. This demanded a type of structure that previously had never been used. (The structure is covered later on in this article.) The tail surfaces were to have a thin cross-section, as is practical for warp-free surfaces. A symmetrical airfoil was used to keep drag down to a minimum. All this took into account the general features of the basic design.

A tail moment of 55% of the wing span has proven very satisfactory in past designs and also was employed in the Banshee. A stabilizer having about 35% of the wing area has also proven ample in the past and was used on the design. The symmetrical airfoil cross-section of the stabilizer and the two-degree positive incidence setting would alloW all the forces to exert their desired effect. The rudder was designed using a thin cross section so that it, too, would not increase the induced drag, The sub-rudders were made larger than usual to allow take-offs in a short space and landings with minimum damage..." 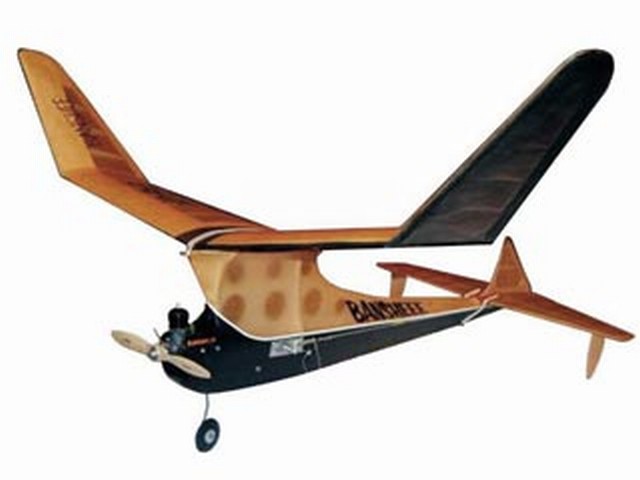