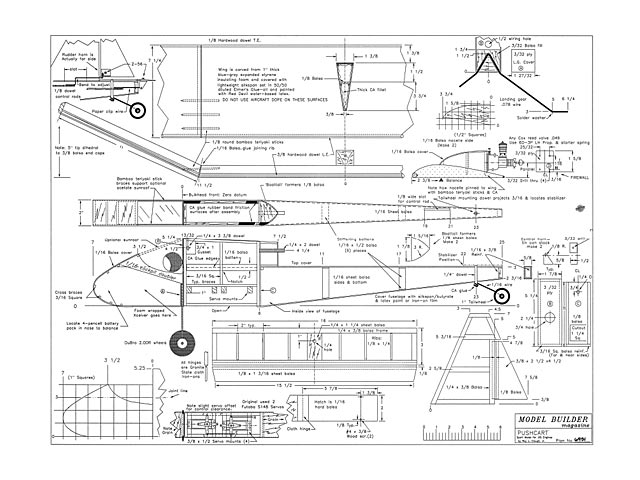 Quote: "Pushcart, by Roy L Clough Jr. An out-of-the-rut 1/2A sport model featuring a mix of traditional and unconventional construction, by one of the most innovative designers in the hobby.

Didn't you ever, right in the middle of a well-considered and carefully planned project, start to daydream about some other intriguing but totally different configuration? Did the notion nag you by floating details of various components before your mind's eye? Did you finally try to relieve the pressure by taking a few minutes from your main squeeze to glue a few pieces together? Then did you push the new assembly to the back of the bench while you turned back to the main job at hand? Me too.

I suspect the malady is as common to scratch-builders as toenails. Partial yielding to the urge is no cure. Once started, the thing just sits there demanding further resolution. So, every so often you sneak a little time to sketch details and assemble another component. Eventu-ally, maybe months down the road, you find you've built another airplane on the back of the bench while waiting for the glue to dry on the one in front. The day I started Pushcart, I hadn't intended to - I was working on something else and let my mind wander.

I'd long wanted a good conventional pusher along the classic lines of the 1931 Curtiss-Wright Junior, or the more recent Woody Pusher homebuilt. But not exactly like those. I was doing this for fun and didn't want to mess around aligning a cabane. The 1935 BAC Drone's shoulder-wing was more to my taste. The model also would have to be a taildragger. It's more fun taking off with your tail in the air and greasing on three-point landings.

I had a bargain two-channel radio outfit kicking around, so I gave the model enough wing and internal volume to haul a bigger battery and those inexpensive standard-size servos. Open cockpit, of course, but sunroofed against the drag of the usual foxhole, and staffed by Pong the Puissant, my long-suffering test pilot and victim of 50-odd years of design meanderings. Thus jelled Pushcart.

Major masses, radio equipment and engine, are divided between the wing and the fuselage. Like on Wall Street, distribution cuts your losses in a major crunch. In line with this philosophy, the foam wing rests on friction strips of flat rubber so that it will stay put with fewer rubber bands but still knock off easily.

With the engine mounted on the wing, won't nosing over send the propeller chewing into the fuselage? Nope. Look closer. If the wing skates forward, the prop will hitthe rearward-pointing hold-down dowel and stop.

CONSTRUCTION: The fuselage is 1/16 sheet balsa, edge-glued with CA where necessary to get the required width. There are two key bulkheads. The front one is 3/32 birch plywood, located at datum zero. The rear 1/8 balsa bulkhead holds the fuselage "boattair formers and the rear dowel anchor. Note the use of appropriate battens and cross members togivethe thin-skinned center section rigidity.

The landing gear is .078 wire; a bit rubbery but very shock absorbent. It is ruggedly sandwiched between the front bulkhead (8) and a plywood mounting plate (A).

I covered the fuselage the old-fashioned way - silkspan sealed on with clear butyrate dope. This was painted with Red Devil water-base latex, which, when absolutely dry, was sprayed with clear gloss butyrate. After all of this work, I decided that if I had to do the job over again I'd use MonoKote or some sim ar product. Suit yourself.

Pushcart was tested both with the cockpit completely open and completely canopied. The best arrangement was the compromise sunroof of acetate sheet supported by Teriyaki sticks. It permits easy access to the radio and battery.

I never hard-mount the battery or radio. The nose of the fuselage is lined with 1/2-inch urethane upholstery foam, against which rests the battery holder. Another layer of foam is between it and the receiver, which is held in place with more foam. This allows instant access with good protection in acrunch. The antenna is led down the inside ofthe fuselage and dangles out the rear.

Two Futaba S148 servos are mounted in the center section and are attached to the rudder and elevatorwith 1/8-inch hardwood dowel pushrods tipped with easily bendable paper clip wire. The fixed tail surfaces are stick balsa with silkspan covering, watershrunk and tightened with butyrate dope. Again, nostalgia be damned, iron-on film is better. The movable surfaces are 1/8 sheet balsa. The only revision made to the original Pushcart was a mainly cosmetic increase in fin area (compare the photos to the plan).

The wing is carved and sanded from 1-inch blue-gray builders' styrene insulating foam. Begin with a 4-foot slab of foam 7 inches wide. Make sure the edges are straight and true. Lay it on a flat surface and, with a razor blade guided by an angled block, cut a 1/4-inch V-groove along one edge. Wrap a small piece of 100-grit sandpaper around a short length of 1/4-inch dowel and enlarge and deepen the V-groove until the 3/8-inch hardwood dowel leading edge can be pushed into place. (You can control the d-ameter of the sandpaper-covered sizing dowel by the thicknesses of sandpaper you wrap around it.) When the fit is right, run a bead of white glue the full length of the groove and push the dowel into place. Rub more glue into any visible seams and allow to dry thoroughly - at least overnight. When dry, lay the wing on a wax-paper covered surface and, using UFO thick CA, glue a 1/8-inch hard-wood dowel to the trailing edge.

Make a stiff cardboard airfoil template to guide you in carving the wing to shape. It is quite easy to shape the wing by slicing it with a big kitchen knife and finishing it off with 100-grit sandpaper, but foam seems to dull knives rapidly. l keep a roller-type, draw-through sharpener handy and touch up the blade often. Chefs and other professional knife wielders despise these hardened steel roller sharpeners for the very reason that makes them great for hon-ing foam shaping knives: the rollers tend to leave a microscopically ragged sawtooth edge, and that's exactly what cuts foam best. Note that the dowel leading and trailing edge spars are very useful guides for the flat of the knife when shaping the leading and trailing edge tapers.

When sanding the foam, use a sanding block with light spanwise strokes. Circular or scouring motions tend to gouge and produce low areas. The airfoil shape should be smooth and regular, with the same section over the full span. Proceed with care and you just may decide, as many have, that this way of building wings is much easier than ribs, spars and sheeting. Wear a shop mask when sanding; styrene particles are no better for your lungs than any other kind of crud. Now cut the wing apart at the dihedral breaks..." 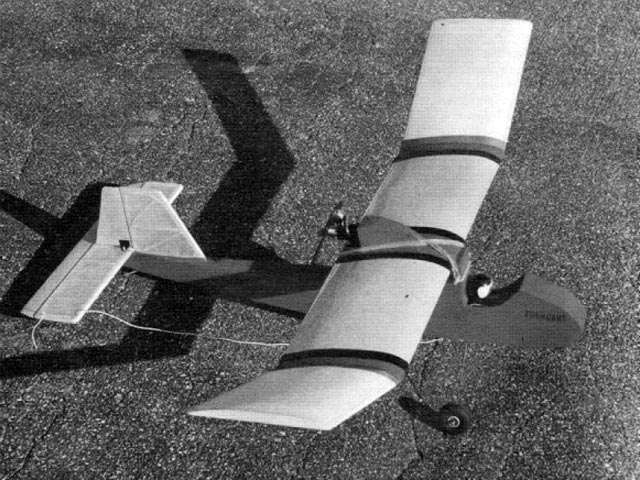