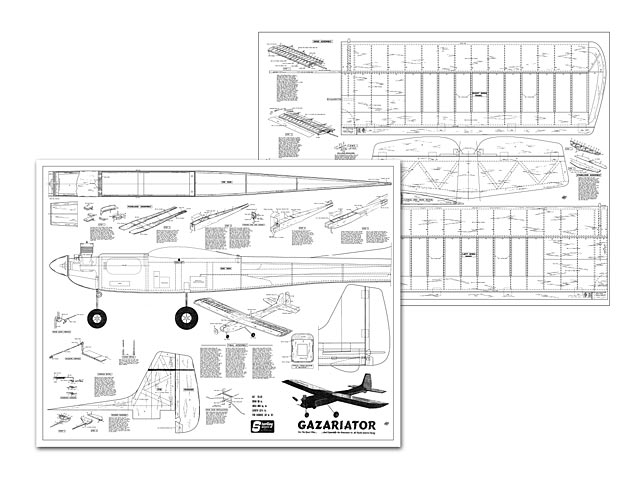 Quote: "Beautiful 68 inch Super Fledgling for 60's. If you are a Sport Flier or a newcomer to R/C then this is your ship. It's a good looking plane that builds easy, goes together fast, plenty roomy for any equipment, rugged for hard use, flies comfortably, and is just the right size for a 60.

And about the kit itself: Fuselage sides are one piece with ply doublers back past the wing. Only a few bulkheads and a shaped top make for almost 'instant fuselage'. Torsion main gear & sprung nose gear (or fly as a tail dragger). Aluminum engine mounts, etc.

The complete wing is built on the work bench without having to remove it which eliminates warps. All parts are die cut, carved, etc. Balsa sheet cover keeps warps out and makes for a tough wing. Tapered Strip Ailerons are simple to install. Wing is installed just like the low wing jobs using dowel pins and nylon screw in maple nut block, like it ought to be. No rubber bands to deteriorate or slip or tear up.

Elevator and Rudder are sheet. Stab & Fin is built up and sheer covered to keep it flat - so that's it, a fine kit of a fine ship."

The Sterling Gazariator was billed as a "Super Fledgling", an enlarged version of the earlier .40 sized Sterling Fledgling (oz4117) kit.

Note this is a 2 colour 400 dpi scan that is in need of a good cleanup, and some very careful straightening out. I have been meaning to get on with this one for ages, but it is a lot of work and I have no time available right now. Since the Gazariator plan is very rare (I don't think there are any scans of this online, at all) I'm just going to just put this up as a raw scan for now. As it is, it remains very useful compared to having, well, no plan at all. Anyone who wants to jump in and have a go cleaning / aligning this one, please feel free :) Steve

THIS Sterling kit produces a large, shoulder-wing trainer, for 50-60 size engines and four channel radio. I feel it fills a gap in the market, enabling the comparative beginner to learn using a .60 size engine, which can then be fitted to a more advanced model of whatever type he intends to progress into.

The kit and assembly: The contents of the kit were comprehensively reviewed in last October's Trade News, and I must say that I fully agree with the enthusiasm expressed there over the quality of the wood. My first reaction was to save the timber in the kit for next year's Class-1 scale winner, and substitute some average English grade wood!

Construction was very easily accomplished in two weeks, following the very clear instructions printed on the double-sided plan. Very minimal use was made of the modelling knife as the die-cutting of all the balsa and ply parts was first class, and most of the strip and sheet was actually cut to the exact length required. Even the webbing between the ribs for the main spars was an exact fit - a great help in view of the rather 'traditional' nature of the construction. The built-up tailplane and fin were just as easily built, all spacers being correctly angled as pressed out from the die-cut sheets.

There were absolutely no awkward or ill-fitting parts, and only two departures were made from the plan. Firstly, I mislaid the steerable nose-leg supplied in the kit, and fitted a fixed leg I had in the spares box. Secondly, I did not bury the Deac under the tank compartment as I always use a heavy engine and don't usually have CG problems. Tank and wheels were not supplied, so I fitted a square tank to prevent having my usual tank rotating problems (with resulting twisted feed pipe). I used 3 inch main wheels and a 2 in nosewheel - found in the spares drawer along with the original steerable noseleg, now too late to fit!

Finishing: To preserve the aura of nostalgia creeping in, but at the same time cut down on smell, trouble and weight, I covered the wings, tail and fin in clear orange film, with silver flashes. As all the expensive stuff is in the fuselage, I gave this three coats of sanding sealer and then covered it with nylon, doped on, followed by three coats of dope and two coats of green polyurethane.

Installation: Thanks to the large, roomy fuselage, the installation work is very easily accomplished. The photograph shows how my Futaba M was fitted - and there is ample room for the more bulky sets in use. (I have also been able to fit three large Sprengbrook servos across the fuselage). There was no push-rod wood in the kit, but push-rod keepers, bicycle spokes, horns and devises were all supplied. Nylon tube (not supplied) was used for the throttle cable. All fittings were supplied for the aileron servo installation.

As my HP61 was hors de concrete, a Webra Speed 61 was kindly loaned by Galaxy Models (on the understanding I would run it in). I was not very happy with the alloy 'T' motor mounts supplied, so substituted a nylon one-piece mount.

Ready to fly, the model weighed 5-1/4 lb, the weight of the bare air-frame having been 2-3/4 lb. No ballast was required, the CG coming out exactly as per plan.

Flight tests: Gazing at the Gazariator's very traditional lines, with the sun shining through its transparent covering, I couldn't help thinking that I should have borrowed an early Morris Minor and taken it to Woburn - but the roar of the Webra brought me back to reality and, after a ground check, the model was away, tracking straight, and quickly flew into the air. A few circuits to get the feel of things and, with two notches of down trim the only adjustment required, a few loops and bunts were tried.

A great deal of flying was put in during this and the following days. The basic acrobatic manoeuvres were all easily completed - namely loops, bunts, eights, rolls, stall turns, spins - and take-offs and landings. The model was quite fast and all these manoeuvres were clean, with no tendency to fall away or drop a wing. There was a slight tendency, however, to balloon, and inverted flight required quite a lot of down trim - no doubt due to that flat-bottomed wing section.

The glide was very floaty, and very slow approaches and landings could be made without any tendency to dropping a wing. In its short career to date, flying has taken place in a wide range of wind speeds, and no vices have shown up. When attempting some of the more advanced manoeuvres, the limitations of the model became apparent, however. I could not manage a Cuban eight, or even a really good Immelman, as the roll was just not fast enough when really needed - even with ailerons set at maximum throw. On the other side of the coin, it can be flown very safely on rudder and elevators, not using ailerons, even though the dihedral is relatively small.

Summary: If you are of the school that feel the absolute beginner should start with four functions plus help from an experienced pilot, then this would be the ideal model. Very docile, with the added attraction that it uses a 61, enabling the pilot - once he has gained a lot of experience this way - to move on to more advanced model without buying another engine.

With the exception of wheels and tank, a very complete kit that, in view of the traditional methods of construction. may present the newcomer with more building problems than flying ones. It is a robust machine that an experienced pilot would find handy for teaching, or for practising the scale schedule. Definitely not suitable for advanced aerobatics, however (sits back and waits to be proved wrong!) but, within its limitations, good value for money."

Update 20/02/2019: Replaced this plan with a much clearer version, (cleaned and aligned) thanks to TonyP. 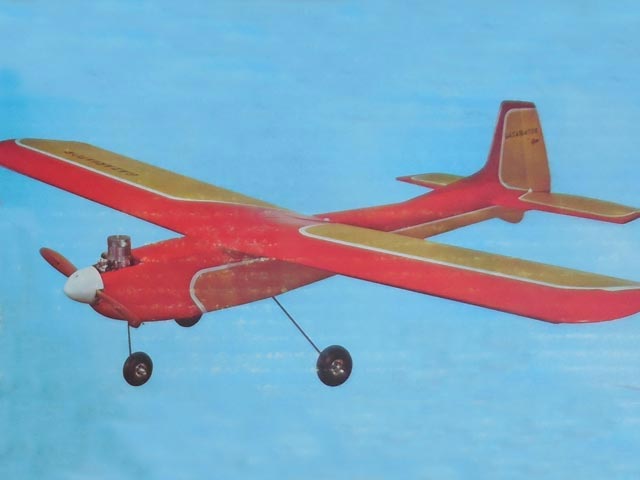 For those that have never heard of the Gazariator it was Sterling's enlarged 'Fledgling', both of which were Sterling's head to head competition for the Goldberg Sr. Falcon and Falcon 56 respectively. Since it was a new design in the '80s it had some improvement in structures and fly-ability over the Sr. Falcon. I flew one for several years with an early .90 size four stroke on ironically, Goldberg Piper Cub floats. Great flyer.
TomSolinski_OklahomaCity - 08/06/2018
It's nice to see the Gazariator plan on your site. Back in the late 1970s, a friend built one of these for his first R/C model. Being a typical Sterling kit, the balsa used was rock-hard and heavy. Because of this, the airplane ended up at somewhere between seven and eight pounds, but still flew well with an old OS Max .50 (non-Schneurle). It was surprisingly fast for the amount of power, and was extremely easy to land. The roll rate was best described as "leisurely", and we soon retrofitted 1-1/2"-wide ailerons in place of the stock items for a slightly improved roll response. It was still no pattern model, but at least we could keep our rolls inside the field boundaries. If a builder is careful with his choice of wood, I think the airplane could be built to come in under seven pounds, and would probably fly quite well with a good .45 and still be a lot of fun. Keep up the good work on the site!
Moeregaard - 18/06/2018
Trailling edge of tailplane is meant to be straight, but is not on this plan due to misalignment of reverse printed half. I am just starting to build this.
anon - 25/01/2019
I'd suggest you stop building immediately, and instead start on re-drawing the plans. These plans need work. They are not aligned. Hence my previous posted warning of: "Note this is a 2 colour 400 dpi scan that is in need of a good cleanup, and some very careful straightening out."
SteveWMD - 25/01/2019
Add a comment