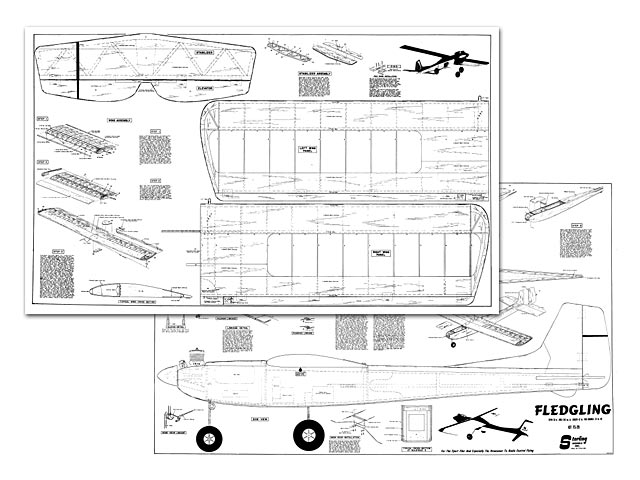 Fledgling. Radio control model 'For the sport flyer and especially the newcomer to radio control flying'. Span 56in, area 545 sq in, for engines .23 to .40 size. Sterling kit no. FS-29.

Quote: "Steve, Here is the Sterling Fledgling. It was Sterling's answer to the Falcon 56 (oz2424). A bit simpler and perhaps a bit more rugged. I flew one with an HB .40 PDP which was probably a bit much for her. Now if you can get someone to submit the Gazariator you will have the 'size run' of the 3 Fledglings."

A 'Fledgling' is a young bird with newly developed feathers. Wings to fly upon. An apt name indeed for Sterling's Sport-Trainer. As we approach the time in our modeling careers when we enter the realm of radio flights, we are each a fledgling ourselves I would think. We know what we must do, but lack the skill to do it fast enough. An aircraft is committed to forward motion and it waits for no man. Too fast and it is beyond us, too slow and it falls as does the stone.

The equation for a good training craft is a worthy goal. Minds differ slightly, but they seldom vary on the basics. Sterling's Fledgling design is aptly named and all a training craft should be. Tough, light, stable, forgiving, roomy, proportioned for flight. Adequate in size, lean in moments, suitable for a range of powerplants and simple in construction. And the price is right. An experienced eye can see it's potential. The experienced flyer can feel it in the maneuvers. It's designed to fly!

Uncork the box and the contents lie before you. A solid boxful of balsa, strip and tapered stock, block and die-cut sheets. Nothing you haven't seen before, but good honest value and all that you will need. A coil-spring nose gear, a formed main gear. A pair of metal engine mounts. Die-cut ply, tapered sheets, dowels, hardware, horns and all. Even the aileron horns are included. About all a fellow has to add is the powerplant, tank, wheels and system.

The Fledgling spans 56 in, boasts 545 squares of area and measures 42 inches in length overall. It is designed for engines in the .23 to .40 range and after test flying the bird with an Enya .35, that seems like a correct assessment of power possibilities.

Die-cut pieces build into the basic stab structure. Sheet balsa caps over the inner frame. Elevators are band-sawed, joined by a dowel crossbar. Rugged and easy. The fin is of sheet, with dorsal spliced on. The movable rudder is to outline, needs only to be trimmed.

Die-cut full length siding is supplied. Plywood doublers laminate against the inner forward portions, with strip longerons cemented aft to the tail. Piece by piece falls into place. Formers are installed next, sliding into notches provided. Nothing could could be much easier. The fuselage takes on a solid feel, light, roomy and meant for business. Nose gear mount and main gear are next in line. A tapered block fairs the rear, while sheeting creates the bottom.

Installations: A Digiace RiC system was installed. There is enough room within the fuselage for any modern digital system. Batteries slip beneath the tank, followed by the receiver (wrapped in foam) and three servos to the rear. (A fourth for the ailerons mounts beneath the wing.) Throughout, the installation follows accepted techniques. It is an excellent Trainer in this respect too, for it gives you experience in typical installations and control arrangements.

An Enya .45 powerplant was bolted to our mounts. It is more than enough as power goes. The .23 to .40 range will satisfy all fliers. Mild with the smaller mills and ready to eat holes in the sky with a .40. Mounts may be spaced to suit your crankcase, but whatever your choice, the Fledgling will deliver.

Trimming Out: The CG worked out just fine. Nothing to shift, no lead in the head. Warps? None. Problems? Non existent. Build it per the plans, eyeball the panels and you're in the air. It might take a turn or two on the links, but ours hardly needed that.

An arrow knows where it's going. Forward, and fast! The Fledgling is not far behind. This aircraft, while simple, is light and agile. It will track out for the stars with a bigger mill, and if you're new to R/C, you'll be flailing with the sticks far behind it. That's all natural enough, but that day of learning by yourself is past. Get together with an experienced flyer. He'll test the ship and trim it out for you to give you a sporting chance. Throttled back, at 300 feet, you try the sticks. From lazy circles, to awkward rectangles, to flowing figure-eights. Gradually you get the feel at altitude and in time fly lower and in to land. It's the way to learn, without bending up the balsa.

Actual flight trials should be held on a reasonable day. Half a loop into the fog is kind of what you don't need. You will do better with a reasonable field, gentle weather and a checked-out airframe and radio. Beware of the old reversed controls trick. Check response with engine off, at low rpm's and full bore. Your fuel feed should be steady, drawing with nose to the sky. Ground range must be checked.

The take-off will be almost effortless. The aircraft seems to fly off on the lifting section. Feed in a touch of rudder as needed and plan on a turn before the departing vision exits from the scene. When you're not used to a radio aircraft, you can fly too far out and disorient yourself in fast order.

Once the aircraft is at a safe altitude, the aircraft can be throttled slightly and the controls felt out. Feed in trim adjustments until it tracks true, straight and level. It really requires some experienced advice on any new radio aircraft, so ask and you will receive. If you have a little stick-time, the Fledgling will seem docile indeed. It handles a range of speeds, from idle revs to full bore thrust. It makes a fine training craft for a future Pattern machine, and it is not so far behind a fully aerobatic competitive machine. In the hands of an experienced flyer, the Fledgling will howl through a range of maneuvers. Basically a good, honest, forgiving airplane. It builds fast, flys beautifully. It's father was an eagle." 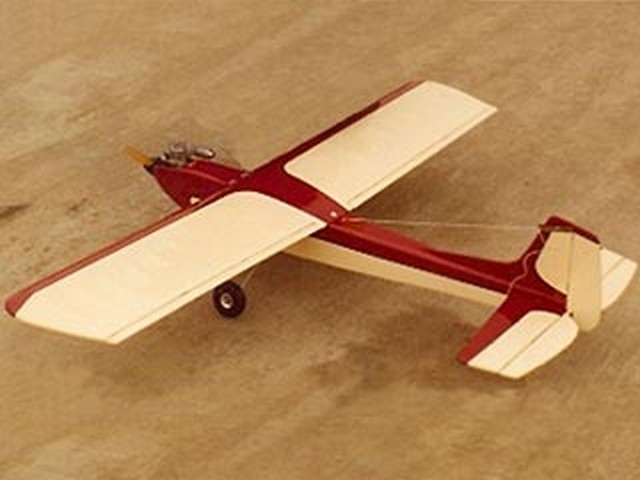 When I started building my first 4 channel trainer in '81, I started with a set of fledgling plans while I was on a 4 month work term out of province. Before the project could be finished, I'd thought of building a Kadet as I was new to RC and my only experience to date had been on an RCM 1/2 A trainer that I self taught myself on. At the time, the Kadet seemed the easier 4 channel trainer to fly and I borrowed a set of Kadet plans from a friend who was wanting to learn. Realizing that my fledgling wing would offer a little more aerobatic potential, I compromised and revamped my fledgling to mimic the Kadet fuselage c/w windshield. The result was a success. I elected to make this a tail dragger which gave it a lot of realism on takeoffs. With all of the fledgling's flight surfaces, the model's flight characteristics gave me a chance to learn some basic manoeuvres and I didn't get bored of it. The Como .40 was more power than the model needed... but oh so fun. Finishing my pilot training that year and buying a Cherokee the following year eventually led to a loss of enthusiasm for models..... till now. Time to dust off the old Kadet..... er... fledgling and make some repairs. It's a great flyer.....want to have some fun in the spring!
Derek - 08/12/2015
A very good simple model. Used with brushless motor Joker and 4S 5000 [see more pics 004]. Thanks for the plan.
ErickBaccus - 18/12/2015
I test flew a lot of these back in the day, it being a popular trainer along with the Sig Kadet and Goldberg Falcon 56. Regardless of what the kit review says, it wasn't a very good kit, heavy wood and poor die-cutting. I much preferred Sig's method of printwood with no die cutting at all. But if you managed to finish it as your first kit attempt, it was a good flyer, especially easy to land. While most beginners installed a pretty hot .40 in the nose, it was a little too much for the Fledgling, making it entirely too fast if flown wide open. And wide open was what it got, full throttle on takeoff and don't back off until told to do so. And so, even if it wasn't all that suitable as a trainer, it was a delightful flying plane for someone with a little more experience. Ailerons were too small but easily replaced with wider wood for more authority. If you build one from the plans, I would add capstrips to the ribs for a smoother surface and easier rib construction. You won't be disappointed with its performance. A good .25 is plenty.
DougSmith - 11/05/2018
Add a comment