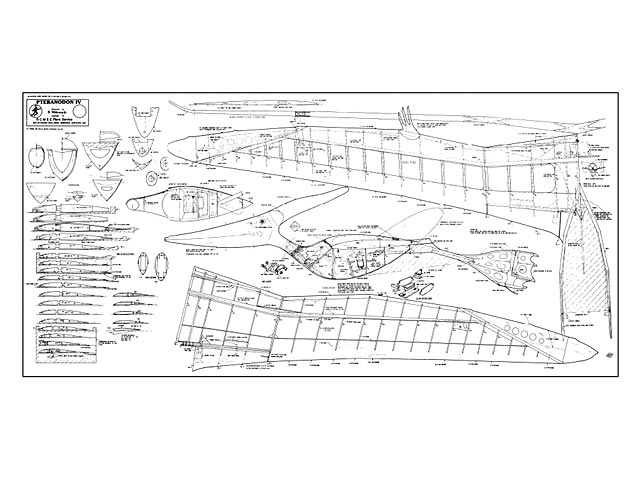 Quote: "THE IMPULSE TO CREATE a flying model of Pteranodon was born when at age seven I first saw a picture of the smiling, long-headed monster in a Puffin picture book. He was cruising in mid-air over a serene tropical bay, complete with palm trees and a distant coral reef. Somewhere around the same time I began flying my first, ready-made, 'Frog' wind-up model aircraft. No doubt the twin enthusiasms for flying machines and prehistoric animals began to fuse in any young mind.

The rest was merely a matter of the passage of time and the accumulation of a mass of esoteric and generally useless bits of information, such as whether a pair of 3/16 in ramin dowels is just strong enough to take the flight loads of a 2 ft glider wing, and whether Pteranodon's trailing edge started right above his ankle, as it does in a fruit-bat, or from some other portion of his anatomy.

Other crucial events leading to Pteranodon's development included a bet made over a pint of IPA at a pub called 'The Surprise' in Chelsea, with that pioneer of radio-controlled model aircraft, Chris Olsen; followed shortly thereafter by the discovery that Britain's leading pterodactyl expert (co-author of 'Biomechanics of Pteranodon', Royal Society, 1971) was a charming young lady who kept pet fruit-bats in a rose-covered cottage near Maidenhead.

Pteranodon has a certain fascination for the seeker after the ultimate in gliding efficiency, since the original animal is thought to have been among the most superb soarers ever to have flown, with a sinking speed below .5/ms (rather better than a full-sized ASW 12 sailplane). It apparently managed this despite the drag of its magnificent beak and startling bony head-crest. First thoughts on seeing an accurate 'three-view' diagram of the creature were that it would fly quite nicely backwards. There are precious few published designs for flying wings with sweepforward, and those few all feature very large vertical fins at the rear. Some swept-back flying wings can manage without much fin area at all (exactly how is beyond my aerodynamic knowledge, but a fine example exists in the vegetable kingdom, in the shape of the flying seed pod Zanonia). But Pteranodon's lateral area, such as it is, is all decidedly ahead of the centre of pressure. My first models played safe by decreasing sweepforward and minimising the size of the beak. This still left the model with problems of control and stability in the yaw axis. Rather than using a transparent vertical fin I hit on the idea of using the feet, held vertically, as twin fins.

The model shown here is developed from the much larger one (15ft span) which I flew in the BBC film PTERODACTYLS ALIVE. It is actually an improvement, in that finally all inhibitions about the beak and body shape were overcome, and the exact outlines of known fossils were followed. The feet are placed at a less obtrusive angle, and the wings are 'fine-tuned' to a more efficient and graceful shape. The flying performance has improved, the forward facing ailerons have almost eliminated adverse aileron yaw, and the model is, when set up exactly as shown, much easier to fly than any of my earlier pterodactyl models. Nonetheless, this model is obviously still something of a challenge. Although quite a respectable size, at over 7 ft span (2.2m), parts of it require specialised small-model techniques. It needs to be built carefully, and flown carefully too..."

Article pages, thanks to RFJ.
Article (2). 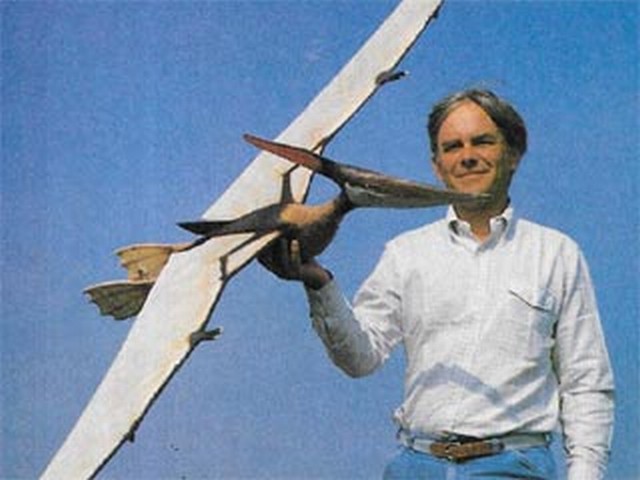