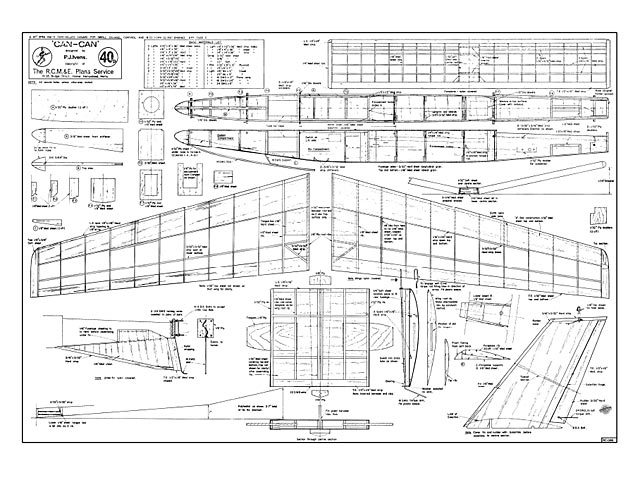 MOTOGLIDING means, to me at any rate, slowly climbing very high, perhaps by tacking each side of the wind, then gliding slowly around, using wind or thermals, as long as possible, until turning into the gentle flat approach, touchdown and skid to your feet. Stunts are possible - but the real fun is, to me, using wind or sun to go higher or stay up longer than last time.

Another way of looking at rnotogliding is that you get all the grace and elegance of silent flight without the trouble of towlines or catapaults - and more of it, for altitudes of well over 1,000 ft are the norm.

So, how to find the most suitable layout for moto-gliding? My starting points were:

1. 049 Cox power, by far the most suitable in this class.
2. Lightweight S/C gear, such as RCS super-regen, with Elmic escapement.
3. Wing loading on the high side, for windy weather.

Having sketched several arrangements for gliders-with-motors, two things dawned: that the motor should be at the rear of the fuselage, pushing; and that the canard has several attractions. These include:

1. The wing and stabiliser are at either end of the fuselage, thus obtaining maximum moments for stability - so 'tail-first' comes out lighter and shorter than 'wing-first' (I have built several examples of each).
2. The radio gear may be spread out around the mid-point of the fuselage permitting a clean, sharp nose and low frontal area - 'wing-first' means cramming it all in the nose to balance out the engine.
3. The effect of CG travel in the wing is much reduced (due to the large moment arm about the CG which permits highly cambered airfoil sections if desired, and
4. It is 'different' - something that my Sevenoaks Club colleagues are kind enough to say is a virtue in itself!

As usual, there can be a few snags: the fin and rudder must be rather large; the foreplane (stabiliser) operates at high CL and, therefore, high drag (on the other hand it does work for its living, which makes the Canard a tailless biplane, functionally!); and knock-oil wings are essential owing to the proximity of a 15,000 rpm Cox-powered balsa cutter.

I certainly did not succeed in solving all the problems of Canard design at the first attempt - there is little published data - even so No.1 version of Can-Can sailed serenely away OOS on her third flight (with a wiring fault) to be found miles away, 3 months later.

Three more versions taught their lessons, as a result Can-Can has been really reliable, consistent and maintenance-free for all of the great 1969 flying season. Furthermore, a larger, streamlined, tailfan 'Hurrikan' powered version produced recently has identical flight characteristics, which suggests that the general principles are sound. With both of them, one gets a lot of flying for very little fuel..." 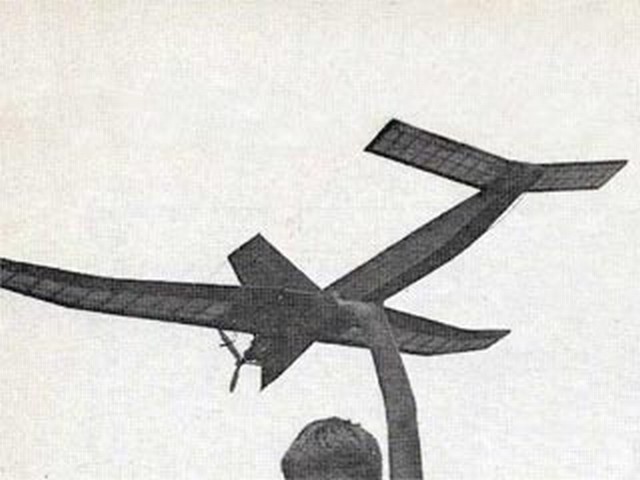