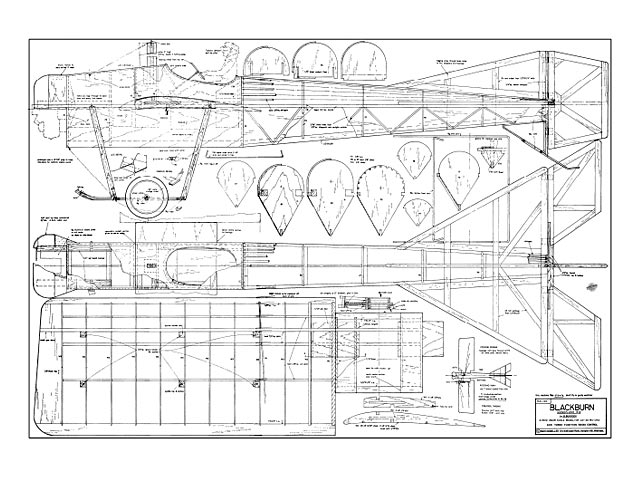 AS MY experience of radio control flying had been limited to the high wing trainer type of model, and I had never built an aircraft of my own design, I started looking round for a suitable first project. The problem was that I - like so many - wanted an aircraft that would look and fly just like the real thing, but would not involve a high speed aircraft, or need a great deal of building work. The end result, after studying many books on all types of full-scale aircraft, was that I decided on the Blackburn Monoplane, 1912.

The choice of the Blackburn has resulted in its receiving quite a lot of attention whenever it has been flown, and it has not given too bad an account of itself in Class 2 scale events. At the Canterbury Pilgrim's show last year it placed 5th and, later, at the Kent Air Show, 13th. On both occasions, unfortunately, the weather conditions did not allow it to be seen flying at its best but, on our club flying around, it has been seen by many in its element. The model has been described by one member, when he was flying it, as - not so much an aircraft but more a parachute with an engine fitted.

The full-size machine was built in 1913 and was fitted with a 50hp Gnome rotary engine (where the crankshaft is fixed and the crankcase and seven cylinders rotate around it!) This used castor oil as a lubricant, at the alarming rate of two gallons per hour, so I am glad the model does not have the same thirst, the price of castor being what it is. The actual aircraft may still be seen, as part of the Shuttleworth Collection, at Old Warden, and it is the oldest British aircraft still in flying condition. The wingspan is 38ft 8in, and it has a top speed of 60 mph.

My model has been built to a scale of 1 in to the foot, and the wingspan is 55 in, the wings de-rigging for transportation.

Construction. The basic construction of the model is very simple, except for the undercarriage, which requires rather a lot of soldering of 8g wire. (For this, one of the presently available gas-operated miniature blow-torches is ideal). The airframe may appear to be on the fragile side, but the original has stood up to some very bad landings, sustaining only minor damage.

Wings: The balsa ribs are made using the sandwich method, by making up two templates, placing sheet balsa blanks between them, and sanding to shape. The wing has an under-cambered section, similar to its full-size counterpart, and features 2-1/2 degrees of incidence which, as you may imagine, together give the desired slow-flying qualities for realistic flight performance. The wing is built in three parts - two outer panels and centre section - as follows.

Outer panels. Pin the 1/4 in sq and the two 1/8 in sq lower spars in position, using scrap packing to raise them to the correct height. Fit the leading and trailing edges in place but do not forget to raise the front of the trailing edge with scrap packing, too, to the correct position. The ribs may now be added and, when set, the top 1/4 in sq spar is fitted. Next fit the 1/8 sheet wing tip pieces, whilst the wing is still pinned to the board, and cut the top spar so that it slopes down to the tip, as noted on the plan.

Centre section. Build this unit up as shown on the plan and, when dry, add the two 1/8 in thick ply tongue pieces, epoxying very securely into place. Build up the box type structure in the outer wing panels to take
these tongue pieces, ensuring that the correct angle is formed where the panel roots meet. Fit the hardwood blocks - six in each wing panel - as shown on the plan. These are anchorages for the eyelets which take the rigging wires and should be securely epoxied in place, as they take the strain while the model is in flight, and while landing, according to whether the wires concerned are flying wires or landing wires... " 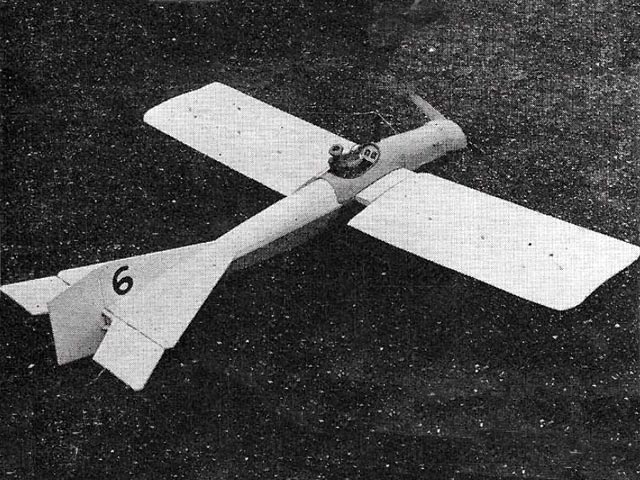