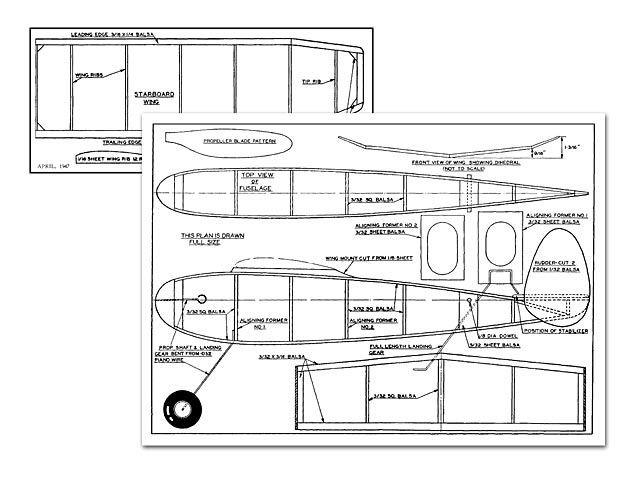 Quote: "The model for April differs from the preceding ones in this series by having the rubber motor enclosed within the fuselage itself. The wood sizes have been kept to as large a size as possible so that the model will be exceptionally strong and rugged, as well as being easier to build with less chance of breaking the tiny pieces of wood and thus becoming discouraged when things do not seem to go right.

One major problem to the novice builder is that of balancing the model to get the best possible flights out of it after spending several hours to build the model. The 'Simplex' has been specially designed to acquaint you with that little gremlin called the 'Centre of Gravity', and how the correct placement of it is very import-ant in order to get good flights. Our handbook defines it as 'the centre of weight, or the point about which a body will remain balanced no matter what its position, and if supported at its centre, will remain continuously in a state of balance.' To the model builder it means that the model should balance horizontally or a little nose heavy at a point 1/3 of the wing chord.

Fuselage: First, coner the plans with a sheet of waxed paper, then care-fully select 4 pieces of good grade balsa wood 3/32" square. Slightly dampen the front end of the two that are to be the bottom 'longerons' of your fuselage. Just to be sure that the two fuselage side frames will end up both identically alike, it is best to make them both at once or better still build one and then build the other one right over the top of it. To build it, start by pinning down your bottom lengths first, keeping the dampened ends to the front. Next dampen the ends of the top lengths and pin them down using the outline for the fuselage from the plans..." 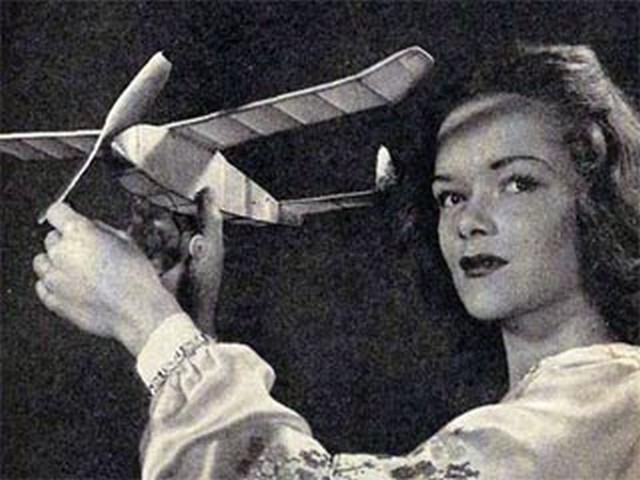