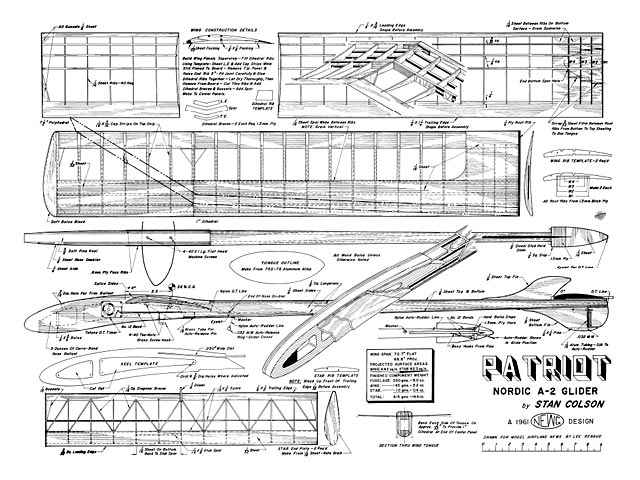 Quote: "If you haven't started a Nordic for the 1961 eliminations, here's the ship for you. The Patriot is a sturdy, non-critical model which will fly well under all weather condi-tions. Flights in early morning air, under no-lift conditions, average between 2:35 and 2:45. In the rough air so often encountered during the day, the stable flight and smooth recovery characteristics of this design ensure good times. The Patriot has consistently out-performed many so-called ultimate Nordics while piling up many wins in East Coast contests.

This design is the fourth of a series, built during the past three years. The original design was strongly influenced by Jim Daley's 'Nor-Easter' (May '58 MAN) with modifications to structure and airfoils to meet my requirements. The result is a strong model which will withstand the high loads imposed by towing in wind. The wing panels are fairly rigid with a light 75S-T6 aluminum tongue providing flexibility.

Although flown in winds strong enough to break 24-lb line, the wings have never folded. The fuselage is fairly simple to build, and has withstood many poor landings, including a 50 ft fall from telephone wires!

I trim with a fairly large circle for calm air which tightens into a thermal circle when the model enters lift, with no spinning characteristics. The unusual leading edge of the wing airfoil seems to help stall recovery with no loss in altitude. These features assure that even a novice to tow-line flying will have a good consistent ship which can win contests.

Start construction by cutting the plan apart for easier handling. Note that both wing panels are shown, which simplifies the job considerably. I usually tackle the fuse-lage first, so study the plans and perspective drawing to make sure you understand the method of construction. Select a piece of 5/8 thick straight-grained soft pine for the fuselage keel. Fasten the template to the block with rubber cement and cut the outline. If you have access to a band saw, this job is a snap, but it can easily be done using a coping saw..." 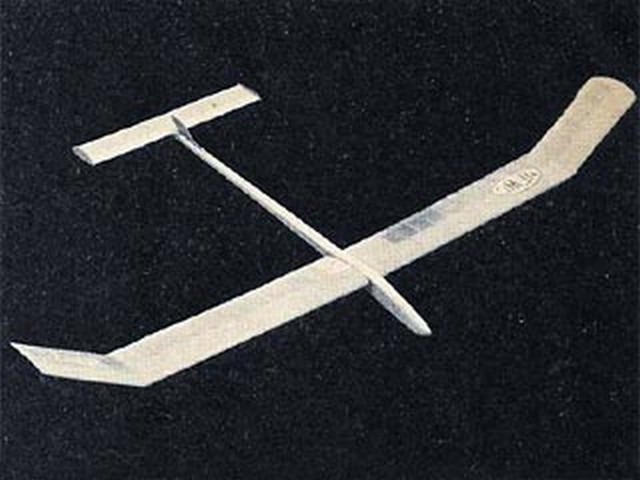