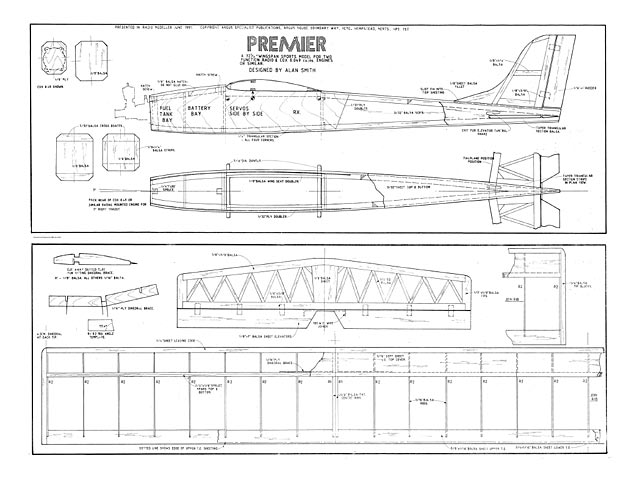 50 pence for a DC Wasp 0.75 cc at a car boot sale can't be bad, especially considering that the money available to me as a fifteen year old was somewhat limited. Although it was gummed up solid the engine was soon loosened up and it ran nicely. Since I did not have a model for this engine I decided to design my own: although later the Wasp was replaced by a Cox 0.049 cubic inch Babe Bee engine which had a bit more power.

Since I had never before designed a radio controlled model I referred to other plans for guidance on such things as wing span, nose moments and tail moments. I intended the model to be mildly aerobatic and reasonably quick but at the same time to have a good glide angle. Due to the small capacity of the engine I was restricted to two channels - rudder and elevator. To keep the cost down it was designed to take standard sized radio gear with the exception of a small 250 mall nicad. So the 'Premier' was conceived.

Fuselage: The fuselage is straightforward in its construction. Begin by cutting out the two sides from 3/32 in balsa - ensuring they both have similar hardnesses so you don't end up with a banana fuselage. Cut out the slots in the sides for the tailplane and glue the 1/32in ply doublers onto the fuselage sides. Next drill out the holes for the wing dowels and glue the 1/4in triangular strips onto the fuselage sides.

Because it is often difficult to hold these triangular strips in place (especially where they follow a curve) while the glue dries the following method was used: Begin by marking with a pencil on the surface to be glued sections of about 1cm and 5cm in length, alternating between them Next apply PVA glue to the longer sections (5cm) and cyano to the shorter ones. Now carefully position the strip in place at one end and press it down firmly so the cyano adheres to the wood. Gradually work your way along the strip to the other end, positioning it and pressing it down so it is held in place by the cyano. The strip can now be left for the PVA to dry. The intervals at which the cyano is placed can be altered depending on the steepness of the curve (steeper curves require more sections for the cyano). When the glue has dried taper the ends of the triangular section at the rear of the fuselage (see plan).

Cut out F1, F2 and F3, drill the holes in F1 for the engine to be fitted (Cox engine shown on the plan) and glue the cross braces to F3. Construct F4 over the plan. Glue F3 and F4 to one of the fuselage sides at right angles. Next glue the other side to these formers ensuring the fuselage is square and has no twists in it. Glue in the balsa wing seat doublers. Position the fuselage over the plan, pull in the tail and glue it together, checking for alignment with the plan at all times.

Pull in the nose and glue F1 in place, again check for correct alignment. Note the inbuilt downthrust of F1. If the engine to be used will be run on its own inbuilt fuel tank then F2 need not be installed and the enlarged bay that is formed can be used to house a standard 500 mah nicad (a 500 mah nicad may make the model nose heavy). The original model had a home-made brass fuel tank installed behind F1 to extend the motor run (how to connect up the Cox Babe Bee to the external fuel tank is explained later). This tank had a brass fuel feed tube that protruded through Fl so before F2 could be fitted the tank had to be made and fitted in place..." 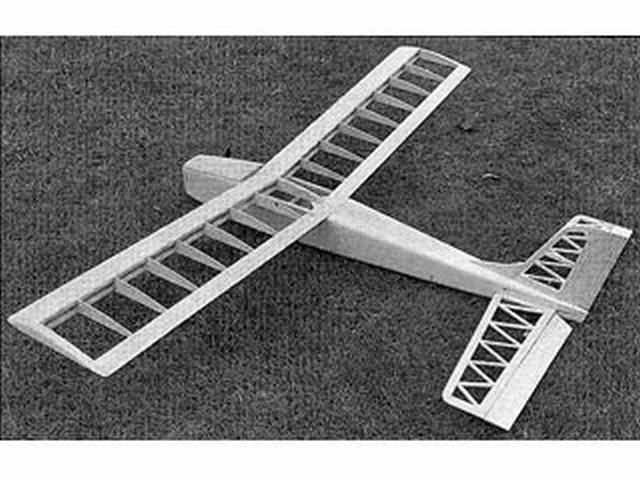