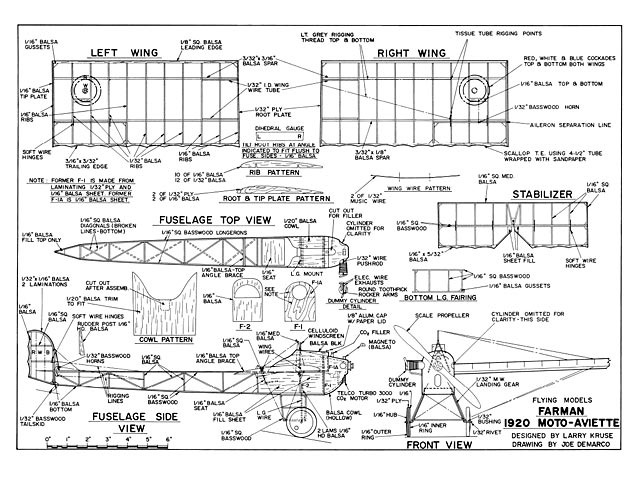 Generally, scale construction articles begin with a brief history of the selected aircraft, and then move into a fairly detailed construction sequence, intended to aid the modeler in building his or her version of the craft.

At the risk of being overly presumptuous, I'd like to range a bit further afield with the reader, and offer some things to think about before I. circle back to the more acceptable format of a construction article. The reason for this little side trip has to do with some questions that have been asked of me, both in person and in writing by readers of the F/F Sport column. Now if you're not interested in mental meandering, I would invite you to go directly to the section entitled 'Construction Notes' and start whittling. For those who choose to stick around, we're going to be dealing with design selection, skill. assessment, and 'project empathy' as starters, then get to the construction phase a little later.

If all of the above sounds too high-falutin, bear with me just a couple more seconds and I'll try to make some sense of it. From a practical stand-point, what we'll be talking about are some ideas that I've collected over the years concerning those things that contribute to success in modeling. To illustrate those ideas, my AMA Gas Scale Moto-Aviette Farman will be the focal point, I'll be referring to it throughout this admittedly half-baked dialectic, and ultimately try to offer you some helpful building hints so your time won't be totally frittered away. Even though we will be zeroing in on our AMA Gas Scale subject, hopefully these ideas will be generic enough to apply to any Scale event and be of some assistance to you in your future projects.

Design selection process. For me, the most important aspect of any design I'm contemplating as a modeling subject is that magical ingredient called 'character'. I chose the word, 'character', for lack of a better term. Pressed to define it, I'm not sure I could. It's more a matter of recognition than definition - a quality that in some way makes the plane conspicuous and unique and allows it to stand out in a group of other models.

Ordinarily, that means that the model can't be a run-of-the-mill P-51 or Cub or any of a like number of garden variety aircraft typically found at a contest. The foregoing is not meant: to imply that the more common designs aren't viable subjects. What is being said is that if you enter a P-51 and expect to garner top static points, you may be disappointed. In all probability, the judges have not only seen the design before, but no doubt can remember a better version, no matter how well done your rendering of the plane. Consequently, your model ends up being judged against a standard you've never even seen - one that exists primarily in the minds of the judges. Several years of personal experience on both sides of the judging table suggest to me that the psychology of judging works that way. In many cases, being different is certainly equated with being better.

Skill assessment. Another important element of design selection is whether or not the plane can be skillfully rendered by the talents of the builder. Not everyone is capable of building a multi-engined, tri-color camouflaged, rivet-detailed B-24. I'm quite certain I'm not, so it becomes important to match the design selection with the skills of the modeler. That's probably why lightplanes like the Moto-Aviette and relatively simple subjects are the ones I pick. I feel very comfortable with the skill level needed and can project at least a half-way recognizable subject when it's completed.

Also, the plane must match the patience I have at hand. A building project that takes. a year and a half out of a modeler's life to complete boggles my mind. I've got to be able to see the light at the end of the tunnel before I ever start, or I'll never finish a project. In essence, what's being said is that the model must match the skills and temperament of the modeler before it has a chance of succeeding. Consequently, I may mentally 'try-out' as many as seven or eight scale designs to see which ones fit my mental set, what skills will be needed, and what problems need to be resolved before the project can be completed and termed a success.

Project empathy. All of which brings us to what is probably the determining factor in the success of any modeling effort - project empathy. If a modeling effort is to succeed, it is absolutely necessary that I like the design. Without this crucial emotional bond, there will be very little success. As an example, I have had the fuselage of a Fletcher F-23 completed for almost 5 years. Ticking off my checklist, the plane certainly has character and is unique. Secondly I think I possess the skill level to complete it..." 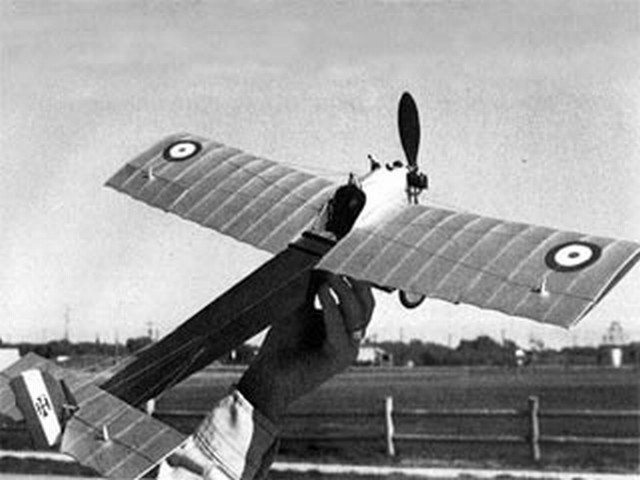 It's always fun to see one of my plans in OuterZone's listing. The 1920 Farman 'Moto-Aviette' won Free Flight Gas Scale in 1984 at the Reno Nats. It was not, however, published in 1971, which would have been two years before I started writing for Flying Models magazine and 13 years before I designed the plane! It was actually published in August of 1986 in Flying Models and was featured on the cover of that issue. Thanks for your service to the modeling community.
LarryKruse - 04/02/2016
Many thanks, Larry. Have fixed the date now :)
SteveWMD - 05/02/2016
Add a comment