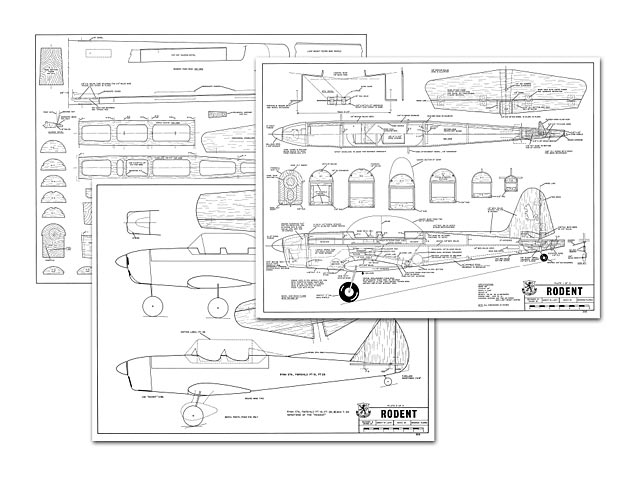 Quote: "A 40in span .049 - .10 powered low-wing aircraft designed for the Lahti pulse proportional system. Bearing a strong resemblance to the DeHavilland Chipmunk, the model is quite capable of advanced performance. Rodent, by Abbot W Lahti.

My favorite light aircraft has for a long time been the British and Canadian De Havilland Chipmunk primary trainer, so I decided that sometime would build an RC model of one. The available Chipmunk kits were for larger models, but having a personal preference for smaller aircraft, I decided to make one from scratch. It used simple construction techniques based on Owen Kampen's crutch idea and either the Midwest or Testor replacement foam wings. Furthermore, it was a good test bed for my decoder, which was described in last month's issue of R/C Modeler. The result in not a scale Chipmunk, but does bear a strong family resemblance, hence the name of the 'Rodent'.

The prototypes were originally flown with a throttle equipped Cox 0.049 Medallion with a QZ muffled cylinder assembly (most flying in the Boston area require mufflers). This motor combination provides considerable power in a very light package. If you are an experienced flyer or very sporting, the design provides room for a 0.09 or 0.1 engine. It is too bad that Cox does not make a QZ assembly for their 0.09 and 0.15 engines. They would fit in these smaller cowled models very nicely. An OS Max .10 provided the additional margin of power for truly outstanding performance.

Coupled aileron and rudder, plus elevator, are used for control. The alierons are resporrsIble for its smooth performance and it is recommended that they be used. A lightweight, high-pulse rate, pulse proportional System should be used. My System as wellas the Airtrol RE-1 are both very suitable. The dual Rand system with the small battery would be all right, but the large battery takes up too mich room and is too heavy. Conventional Galloping Ghost has not been used but it should not present any problems if the control throws are not excessive..."

Note the plan also shows some simple variations of the same basic 'Rodent' design, styled towards the Ryan STA, Fairchild PT-19, PT-26 and Beach T-34 by making small changes to shape of tail surfaces and using a different style cockpit. 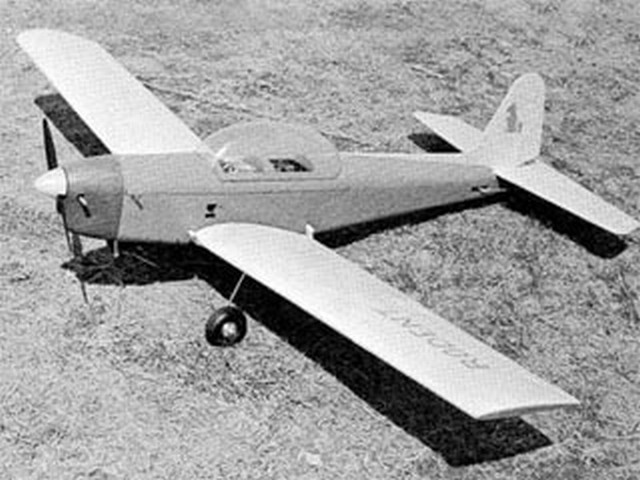