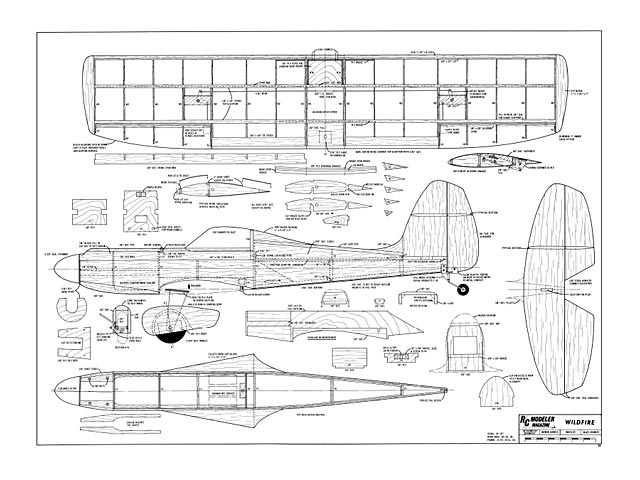 Quote: "Designed for the new lightweight digital systems and a hot .15 to .19, the Wildfire will do virtually every maneuvre in the book. The roll rate is fantastic, no tendancy to drop a wing at any speed

When I designed the Firefly (oz8069) RCM Feb 1968 I thought I might help start a trend to smaller models, but not long after that the Bonner 4RS appeared and made it possible to shrink the size even further. The Wildfire was designed specifically for the new, small digital systems, but with a little effort and a shoehorn it is possible to get other light gear, such as PCS, into the little bird. With the new smaller servos becoming available in other systems, there will be a choice of equipment.

Since lower cost is a big advantage with the small models, a few design tricks were used to help a bit more. For instance, the wing has a flat center section so that the distance from the root rib to the tip rib is exactly 18 inches, just cut 36 inch stock in half. Both wing tips and the fillets come out of a 36 inch length of 1 x 1-1/2 in balsa. The wood merchants won't like this and they can cry along with the fuel manufacturers - the little engines don't drink much! The structure is all sheeted for rigidity and allows you to use a lighter covering.

The ailerons incorporate washout, as on the Firefly, since this has proved to be very successful. Roll rate is fantastic but there is no tendency to drop a wing suddenly at any speed. With the controls set for maximum throws the airplane is very sensitive and capable of doing anything you want it to, but it is easily tamed by just reducing the throws. However, in full fighting trim it has good stability and has been flown hands-off for the full length of the San Diego Drones 400 foot runway, without dropping off. The original model had surface motions of about 25 degrees up and 15 down on the ailer-ons, 25 degrees each way on elevator and 30 each way on rudder. Tail dragger landing gear was used partly for a change and partly to get rid of the steering unit in the small nose. Ground handling is good with the wide track .Hallco main gear and there is no tendency to ground loop. On take-off the tail comes up quickly and tie bird will fly itself off, while land-ings can be two or three point, depending on how much you want to impress the tourists.

The airfoil section is a 15% semi-symmetrical laminar flow type (NACA 642A215) and has very good characteristics for models. I do not like full symmetrical sections that are supposed to make the model fly the same upright or inverted, but don't. As any book on airfoil theory will tell you, a symmetrical airfoil will not develop positive lift at Zero degrees angle of attack, but must be at about 2 degrees positive, so the model must fly slightly nose up, which, in turn, increases drag. When flying inverted the airfoil must again be at 2 degrees positive, so there is a trim change of 4 degrees between upright and inverted flight. These are just typical figures but apply to most of the sections in present use. On the other hand, a semi-symmetrical section will de-velop positive lift at zero degrees angle of attack and some will even develop use-ful lift at a slight negative angle, so the model can fly flat with minimum drag. When inverted, the semi-symmetrical sec-tion may have to be held at a positive angle of 1 or 2 degrees, depending on the section (this is relative to airflow and has nothing to do with angle of incidence, which is a fixed rigging angle on the air-plane). But the trim change from upright to inverted is only 2 degrees. In any case, unless the wing, tailplane and thrust line are all on the same horizontal line, the flight characteristics of upright and in-verted flight will be different due to the change in downwash effect on the tail, just to mention one reason. Anyhow, full size aircraft don't have symmetrical control response so why should our models? There, I've said it, now I will get down off the soap box and wait for the arguments to start.

Don't leave off the wing fillets, they are not there just for looks. I have been preaching the use of fillets for years to anyone who will listen and there are good reasons for using them. My lecture on this subject requires diagrams though, and this is not the place for it. The excellent series on aerodynamics in RCM agrees with me, anyhow!

Now to work. Construction is very simple and no special tricks or jigs are needed. I like to start by cutting every-thing out and putting together what amounts to a kit, so everything is at hand, but to each his own.

The fuselage sides should be completed with all doublers and the engine mounts attached and the longerons and spacers glued in place. The 1/32 ply doublers add greatly to the strength with little weight and prevent the sides from split-ting lengthwise. Formers F1 to F5 are then installed and the assembly squared up before pulling the tail end together. A spruce tail block provides a solid foundation for the type of tail wheel shown, but if you use another type just reinforce as needed. Control linkages should be made up while the fuselage is still open in order to get the clearances, or use Nyrods which don't have the problem. The bottom sheeting and top deck are now added, the top side sheeting overlapping the longeron for a solid joint. While this is drying, shape the tail surfaces and stick them in place..." 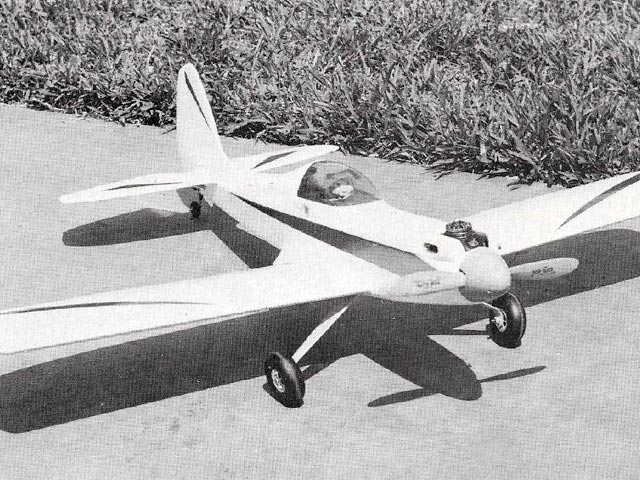