Quote: "A biplane Peanut that flies well is always welcome here, and one that has character is even better. Ya gotta build this one, if only to try out the camoflage method.

Those modelers who have done any amount of research into bombing and reconnaissance aircraft of WWI may have found, as I have, that in general, the majority of these aircraft make rather poor subjects for free flight rubber scale development. With the low powered, relatively heavy engines then available, many aircraft required large span wings for lift and rather short fuselages to concentrate the weight of the extra crew member and bomb load close to the CG. Fortunately, there are a few suitable exceptions to this generality, and the Austrian Berg C.I was one. Although a two seater, it was only slightly larger than the Berg D.I single seat fighter, both of these aircraft having been designed by Dipl. Ing. (Diplom-Ingenieur) Julius von Berg.

Series 35 Berg C.I's were constructed by the parent Aviatik company (Oesterreichische and Ungarishe Flugzeugfabrik), while four other companies built C-1 's under sub-contract. These were Series 45 by Lloyd (Ungarische Lloyd Flugzeug and Moterenfabrik), Series 83 by WKF (Weiner Karosserie und Flugzeugfabrik), Series 91 by MAG (Ungarische Allgemeine Maschinenfabrik), and Series 114 by Lohner (Lohncrwerke Gcs.m.b.h.). The Series number precedes the individual aircraft number on the fuselage sides, so in this case you may select from many authentic markings. The C.I was powered with a 185 or 200 hp Austro-Daimler six cylinder, in-line, water-cooled engine. Scale documentation may be found in the Harleyford book 'Reconnaissance and Bomber Aircraft of the 1914-1918 War'. I highly recommend the British Harleyford series of aircraft books for scale aircraft data, although some of the earlier volumes are long out of print. This author, incidentally, has co-authored two volumes in this series.

Construction of the C.I is no more difficult than any other bipe, but unless you can build exceptionally light, it will not be a 'sort of scale' 5 gram ghost. Mine weighed in at 18-1/2 grams, less motor. Try to keep yours lighter.

Soak the fuselage longerons well and pin in place to the upper and lower curves. When dry, add the vertical bracing and fill-ins. Before separating, drill through for the lower leading edge holes and for the rear peg. Separate and add crossbracing. Add the front lower nose piece, which has a 3/4 x 5/8 cut-out to accept a matching rear piece of the nose block. Add the 1/64 ply nose former and the others of 1/32 balsa.

Rough cut nose block and hold in place with double-stick tape for final shaping. Remove and cut out area for radiator, then install aluminum window screening. Cut off lower portion of nose piece, as this will become the removable nose block. Paint front of ply nose former and rear of radiator piece flat black, and glue block in place. After covering the fuselage with prepared hexagonal finish tissue - to be described later - paint the nose block and engine cowl forward of cockpit with a thin coat of Pla Silver and, when dry, add a thin coat of Pactra Flat Battleship Grey. Allow a few tiny spots and streaks of silver to show through, and by Hung, you have instant weathering and chipped paint effect. Add panel lines and louvres with your Sharpie felt marker.

The stab and rudder are straight forward and should present no problems.

Preparation of the covering tissue is basically the same as used on my Roland D.XVI. Best paper I have found is SIG's Super Lite, which has a harder surface than regular tissue. After pre-shrinking with alcohol, remove tissue from the frame and tape to a piece of glass which has at least one square edge. You will also need a T-Square, a plastic template with a 1/2 in hexagonal hole, and a selection of various colors of felt marking pens. After drawing in each hexagon move the template along the T-Square to the next color and then to the next row. The best source of data on the proper colors to use is Profile Publication No.151, the Berg D.I, as photos indicate that the same system of camouflage was used on the C.I. Sure the procedure is tedious, but the results will be worth it, so make enough to cover the plane, with some extra for patching.

Because of the thin, undercambered wing, I found it most convenient to make a jig of soft pine or balsa, 5 x 15 x 1 inch thick, with the top surface carved and sanded to the bottom curve of the wing rib. Draw the wing outlines on the board and build the wings right over the Saran-wrapped form. The four wingtips may be molded on the same form. Allow the leading and trailing edges of the lower wings to extend 1/16 in from the butt rib. The LE fits in the prepared hole in the fuselage, while the TE fits under the bottom longeron to give the proper incidence. On a biplane, I find the assembly easier without the landing gear installed so that the proper lower wing dihedral may be blocked in place. Cut spacers of scrap to fit vertically between the wings, then with squares or cigar boxes at each wingtip, line up the whole shebang and add the cabane struts of well-sanded 1/16 dowel. When set, add the outer wing struts. Complete the assembly by installing the tail surfaces, landing gear and rigging. The struts and landing gear were painted Floquil Dark Green. The wing and rudder crosses may be cut from black tissue or SIG's black decal sheet.

Best performance so far has been with a dark brown painted 6 inch Tern Aero plastic prop. The C.I has been happiest with a right-right flight pattern, and powered with one loop of 4 mm or 3/16 rubber. Shim stabilizer at front of enlarged slot until optimum glide is obtained, then glue in place. Although basically an outdoor plane, I have flown it successfully indoors with times of 30 to 35 sec. Outdoors, of course, you are at the tender mercies of Hung, the great God of the Skies.

The C.I may not compete in total time with say, a Lacy, however it makes a great entrant for WW-I combat and I hope, like myself, that you will become all goosey and puckered up in the right places when you see it floating overhead with old Sol stabbing his hot rays through that nice camouflage covering job that you are going to take the time to do. Aren't you?" 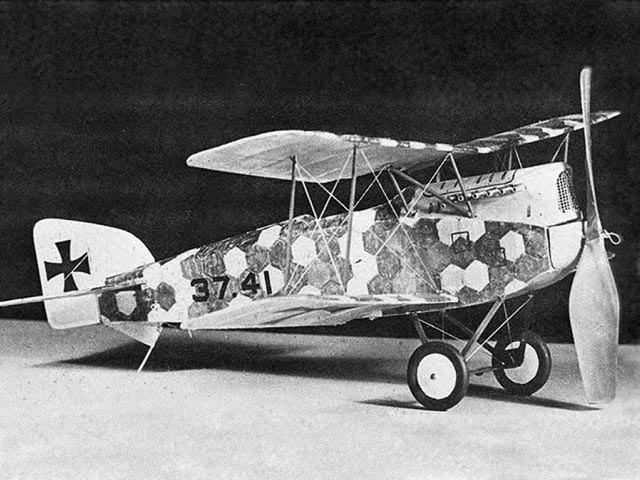