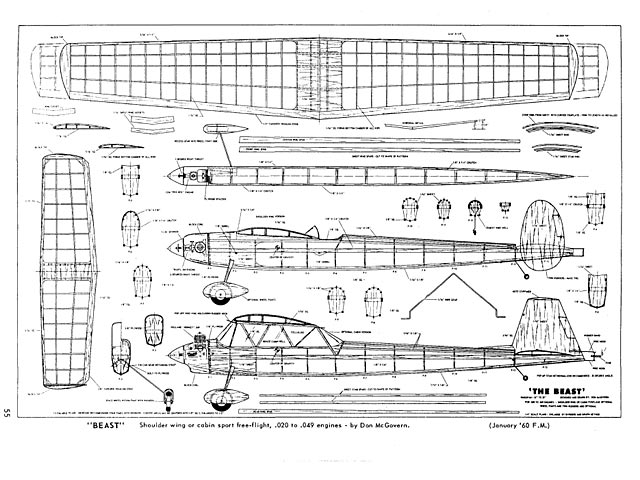 The Beast. Sport free flight model. Can be built with either a 34 or 38 in wing. Multiple configuration, with 2 different fuselage styles shown.

Quote: "All pylonhaters' gather round - here's plans for a shoulder wing sport free-flight, and if that is not for you, a cabin version, single rudder is also shown. Wing area may be increased for those who wish to calm it down a bit, and an .020 may be used if you prefer less power built in.

A glance at the framework in the photo will reveal the built-up rib structure, used both on the wing and stab. The built up ribs were used for several good reasons. First, they are by far, the easiest type ribs to make, especially when dealing with a tapered wing configuration. Secondly, all spars are recessed away from the covering, and yet are close to full depth. Then too, weight is also saved, and it adds to the appearance of the model and provides a change of pace.

A template is now cut from celluloid, plywood, or hard balsa (better yet, use a French curve if available.) Select firm medium grade 1/16 sheet, and strip off 3/32 deep airfoiled top camber strips. Trim each to the length required as it is installed. It is as simple as that and makes a beautiful and efficient structure in less time than any other method. Repeat same procedure for the stab.

Fuselage: A crutch of 1/8 x 1/4 in medium grade strip provides the starting point. The formers are cut as indicated and positioned. Bend the gear wire to shape and strap on ply former. Drill the engine mounting holes in the firewall..."

Quote: "This is one good looking plane with a built up structure, you even have to build up the wing and tail ribs which is something you don't see very often but an idea that works well in practice, I have even used it on CL stunters to save those last few grams. Admittedly I could probably have saved more by weighing the wood but I massacre balsa for fun! Another feature is the choice of fuselage(s), either a shoulder wing or a high wing cabin. The shoulder wing even has twin fins so would look really cool. Power for either is, once again 020 to 049, Mr Cox has the influence once again." 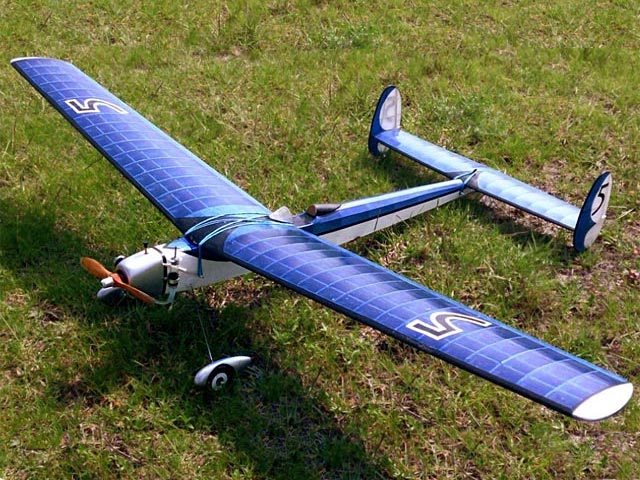 Dear Steve, Here are some pics of two 'Beasts' we, Marco Guillermo and I, Armando Gama built and flown successfully here in Mexico City. A Cox .049 is even too powerful for them as they have to be flown with a rich mixture to keep it from spinning. Thanks Hogal too for uploading this plan!
ArmandoGama - 16/07/2013
Add a comment