Quote: "THE original 'Saint' was designed in August, 1950, and at that time very few team races had been flown, but to Ken Muscutt and myself it seemed likely that the diesel powered racers would eventually be outpaced by racing type glo-motor powered models.

The Saint was flown in several races before it actually won a first place, but in most races where a second or third place was gained, the Saint had been leading until it suffered some snag or other. The first actual trouble-free race gained a first place in the Davies Finals. Super Saint, powered by an ETA 29, won its heat, semi-finals and the finals, all without a hitch.

Construction. Wing. Cut leading edge from hard 3/8 in sheet and taper to plan view, then taper lower surface from centre section ribs to tips to produce slight dihedral. Trailing edge is from 3/16 in medium sheet and ribs are strips of 1/2 x 1/8 in sanded to a lifting section. Wing tips are from soft 3/8 in balsa. Install ply bellcrank platform and support, mount bencrank and controls in centre section, fit push rod but leave bed for control horn till later. Check controls for full movement, then cover top of wing with 1/16 in sheet (two 3 in sheets butted together). Add weight to outer wing tip..."

Quote: "The Super Saint is a Class B team racer designed by Ken Marsh. It was designed in 1950 and was entered in a few races but was stopped from getting first place by engine troubles. These were eventually sorted and the plane went on to start winning in 1951 with an ETA 29. An interesting model from the birth of team racing in the UK. As with all my tracings please be careful if you plan to build from them and double check all measurements before wielding the knife." 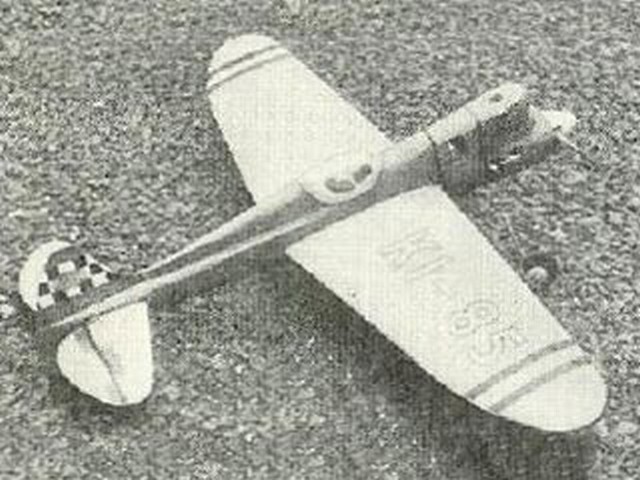