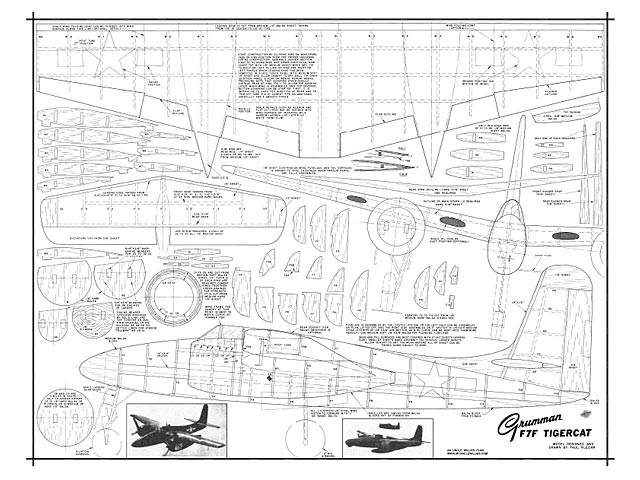 Quote: "Long a favorite with scale fans, the Tigercat has been used with increasing success in the Navy Carrier event. Aerodynamically clean, moderately simple (as twin-engine jobs go) and devoid of 'frills,' the F7F is a natural Carrier job.

While not a beginner's project by any means, it is not unduly complicated. For the slightly advanced model-builder it is a worthwhile project. Due to a fair number of parts that are cut from heavy sheet balsa, a jig-saw is a must. For this we found a vibrator-type jigsaw best, but any powered jig or band-saw will do.

Construction can be started with either the wing or the fuselage, but do the wing first - it's a little easier that way. After butt-joining two widths of hard 3/16 sheet (3" wide) and splicing in an end piece to obtain an overall length of 43 or 44 in, trace the spar shapes. The two main spars are copied off the front view. The rear spar is shown directly above the front view. Use firm, fairly hard balsa for these.

Once the ribs have been cut, proceed with actual assembly. Note that tabs are used on the rib bottoms to position them on the work board for proper incidence (since there is no flat section to the undercamber, it would be difficult to line up the ribs otherwise). Refer to the front view now and mark rib positions on the main spars in ink.

The three W1 ribs are pinned down on the wing plan then covered with 1/8 medium sheet. Sheeting for right and left panels butt into center section over outboard W1 ribs, so cover only to the 'center' of these ribs, leaving some contact area for cement.

When cement is fairly dry, pins are removed from center-section area and wing assembly tilted so ribs on left panel touch workbench. Once ribs are aligned in position, cement in place..." 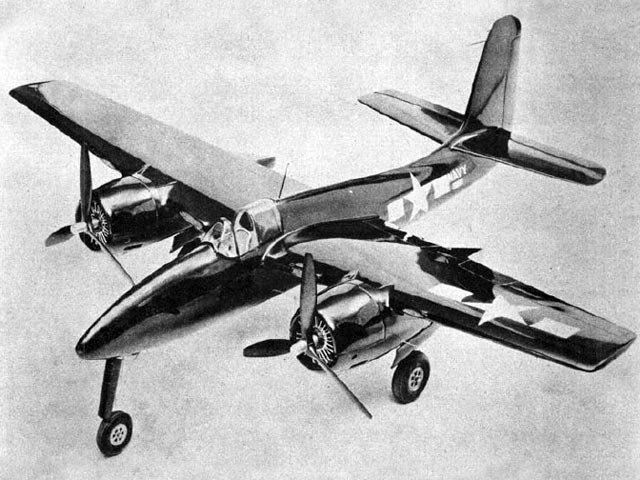