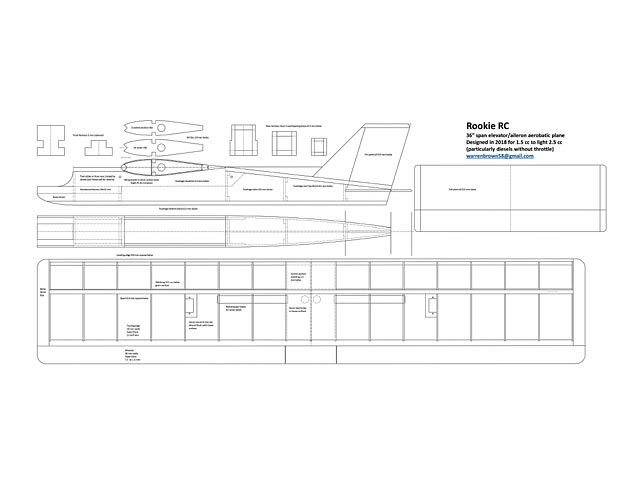 The original Dick Steele Rookie Trainer (oz5458) was a CL design, circa 1970. This here is a later version for RC.

Quote: "Hi Steve (or Mary), My next plan submission is Rookie RC. I've been flying it since 2018 and it flies very well in all weather. It is based on an old CL design which was the standard aerobatic trainer in my region in the 1970's.

It was sold as a paper bag of bits and some verbal instructions from the back shed of a bloke called Dick Steele - oh the smell in that shed! I never had a plan so the design is very much just a memory.

I've had two versions (actually the same one just refurbished) first powered by a Taipan Tyro 1.9cc diesel [pic 003] then by a much rarer Taipan 1.5cc TBR diesel [main pic]. Goes quite quickly!

The Build Notes [seee supplement files] includes some notes on my clank tank which allows outside loops and inverted. Hope you like it. Regards, Warren" 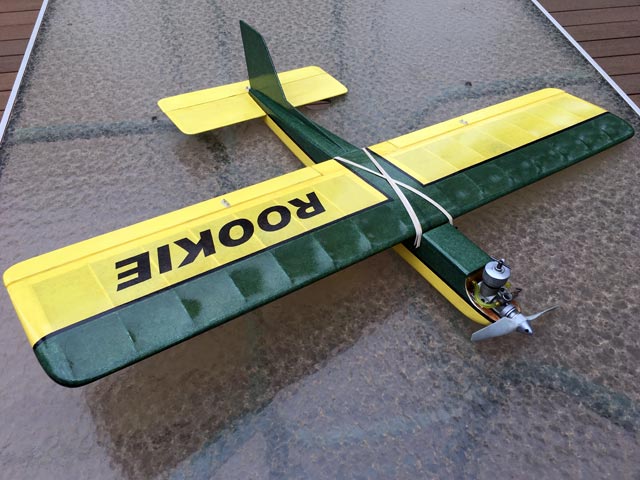 Most Aeromodellers in Melbourne's eastern suburbs knew of Dick Steele. His Free Flight, Control line and RC models, are well known to several generations of modellers.
Ralph Fisher - 23/09/2021
Yes Dick’s shed was a wonderful place, open all hours (except tea time between 6 & 7 and Tuesday mornings when he walked to Croydon market).
I had several of his models, a Stick Trainer, several Rookies, a 60 size Marksman and a Quick Fly. None with a plan, all with paper bags of bits and a general verbal instruction.
Warren Brown - 23/09/2021
I used to go to see Dick Steele after he retired and went back to Perth to live, and I used to drive out to his house, on my working trips.to Perth, and I still have a few of his Stick Trainer and Rookie Trainer kits.
As others have commented Dick never supplied plans with his kits, but I had plans drawn up for the Stick Trainer, the Rookie Trainer and his 44” C.L. Stunt model which a friend told me was called The 12 1/2 , and I still have one of these C.L. Models hanging in my Workshop.
We have recently found the plan of the 52” C.L. Rookie on the Internet.
Alwyn Smith - 24/09/2021
Dick Steele was indeed an institution in Croydon, Victoria Australia. He was a great friend of the whole of our family, mainly because we all made model aeroplanes. As has been said already, his home was our shop and after many many years, we can still smell those delightful aromas of dope, and diesel exhaust fumes. When he died, I was left his entire engine collection but never received any of it, dark forces at work methinks. Great memories of Dick though. John, Kath, Anthony and Angela French, Eden, NSW, Australia.
John French - 24/09/2021
Add a comment