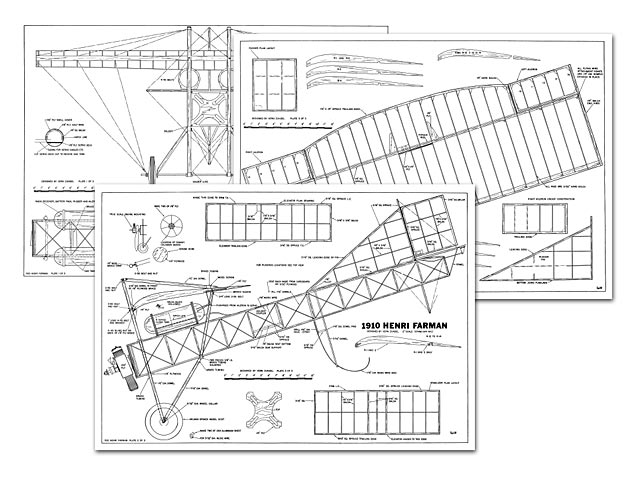 Quote: "Transparent wings spread 47-inches to loft this fragile antique bird gently upward from the thrust of an Enya .45 cleverly disguised in the nose.

Indian Summer fades away and Fall gives way to Winter. It is a signal to return to the workbench. In search of an interesting project for the cold months ahead I came upon a layout of the 1910 Henri Farman in my reference file. It caught my eye right off, a real stick and tissue type, not too unlike the structure of models we used to build twenty-odd years ago.

The peanut sized drawing was by WC Hannon Graphics of Esconido, California 92025. It inspired me to think in terms of a 2" scale Stand-off R/C, which would have been a poor subject many years ago. When we had nothing more than one-tube radio systems, ignition mills and scant experience, it would have been but a dream. Today however, we have such foolproof systems and know-how, we can make almost anything fly, and very successfully. I consider this ancient aircraft to be not a bad or even a poor design. I found it to have clean lines, an interesting planform and a nostalgic appearance overall.

Structurally, it's a very easy flying machine to build as it's almost entirely square in line, except perhaps for the trailing edge. It does have some drawbacks of course. The short nose moment requires careful building at the tail section to achieve proper balance. A little weight will be required at the engine location to acquire the proper CG.

The outer lines of the aircraft are as close to true scale as data permits, and only the most important changes were made internally to assure a sound design. As with any intricate model, care in building will be rewarded upon the flying field. Choose your materials for strength and weight accordingly.

Wingspan was 23.5 feet, the chord 6.5 and the ailerons were positioned in the rear of the wing tips. The basic fuselage was triangular, with the tail mounted on the fuselage triangular fin. Total weight was 661 pounds, including the pilot. Length measured 26 and a fraction feet. Spoked wheels for the forward gear and a skid aft. The propeller was a two bladed Chauviere tractor, which hauled it along at an unknown rate of air-speed. Steering was accomplished with an elevator at the rear and a rudder above the aft surface. A special feature of the design was the position of the main plane and the early use of ailerons. So much for the historical side, sparce as it is.

The Model's Construction. Before attempting to start this project, you must consider the type of R/C gear to be used, Lay out enough area in the dummy gas tanks for all the RIC equipment, in-cluding a six ounce clunk type tank. When all is fully installed there will be no visible means of control and it will bring a flood of enquireies as to where the equipment is and how it works..." 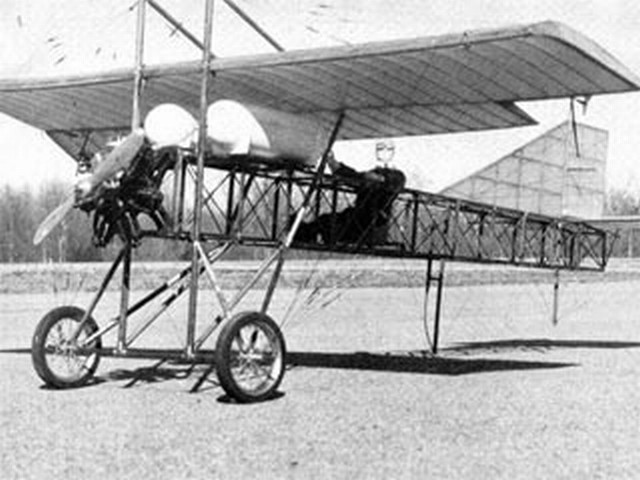