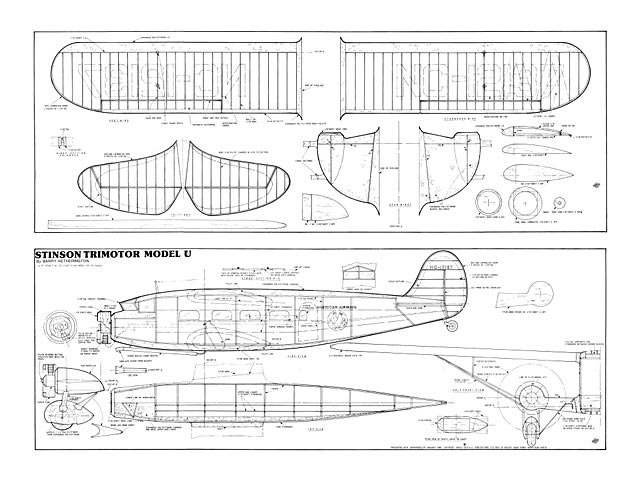 Quote: "Classic American airliner for CO2 is a stable, fine flier - indoors or out! Stinson Model U, by Barry Hetherington.

THE STINSON Trimotor Model U of 1935 upon which this model is based was the final development in a series of high-wing trimotor airliners designed specifically for the smaller American airline operators. It had cabin space for 10 passengers and a cruising speed of 121 mph.

The reasonably large wing area, long nose and mostly fabric covering make it a suitable subject to model, in addition to which it is an attractive aeroplane with the extra interest of three engines, lower stub wings and large wheel spats.

A wing span of approximately 30 in was determined as about right for CO2, power using one motor only with freewheeling outer props, and given a full size span of 66 ft, a scale of 7/16 in to 1 ft was used.

In spite of its apparently high finished weight of 95 g it is surprisingly slow in flight; and its realistic flight pattern earned it the highest flight scores in its class in both Indoor and Outdoor SMAE Nationals in 1987. Qualifying times of 20secs plus present no problems and subject to the well-known inconsistency of CO motors, durations of 20 to 40 secs are not unusual, indoors or out.

Although the model was specifically designed for use in serious competition flying to SMAE rules it incorporates only simple and inexpensive materials. For the modeller who is interested in free flight scale, the following descriptions of materials and methods will, it is hoped, assist in the construction and trimming of this particular model and perhaps other scale subjects.

1. Polystyrene Blue foam is easier to carve and sand than the more common white foam, but it is heavier. Hollowing-out is important for weight reduction; a covering of tissue will replace all the surface strength required. Contact with cellulose based substances must be avoided. PVA adhesive is ideal for gluing joints. Usefully, epoxy resin glues do not react with polystyrene. The best and lightest finish is obtained by doped tissue covering, and prevention of damage to the foam surface is possible by using the following method:
(a) After final shaping and sanding apply a coat of 50/50 water/PVA solution to all outer surfaces.
(b) When dry, sand again.
(c) Apply tissue using tissue paste, cutting and stretch ing around compound curves. Do not be concerned about overlapping joints; this will hardly show, but be careful to paste tissue firmly to any concave areas.
(d) When dry, water shrink.
(e) Dope, but not with a thinned mixture - apply straight from the can. Thinning encourages penetration through the tissue and prolongs drying time, allowing still further penetration and a greater chance of surface attack.

2. Contact Adhesive (Evostick) This is an extremely useful adhesive for the construction of scale models for the following reasons:
(a) A relatively slow drying time but instant adhesion holds items together.
(b) The ability easily to part a joint at any time; and if required all traces of the glue may be removed by carefully pulling away the adhesive.
(c) Flexibility remains in the joint so that 'hingeing' joints may be used. (Note! Do not allow Evostick to contact polystyrene).

3. Covering and finishing materials: Ordinary wrapping tissue is used for covering the model. Although basically heavier than aeromodelling tissue it has the advantage of being very much more opaque, making colour spraying not essential (the Stinson featured here was clear doped only). High shrinkage is a feature, so lightly steam only - but make sure that the tissue is colour-fast (most are not) or the dye will streak. Tissues having the trade name of 'Club' are very satisfactory and a wide range of colours is available.

Finish with 50/50 dope/thinners except on foam covered areas where, as stated earlier, unthinned dope must be used.

Stick tissue to the full lengths of all ribs, stringers and framework where the intention is to give scale construction effect. This also prevents the distortion of light structures which can be caused by tissue shrinkage. For a superior (but of course heavier) finish, light spraying may be used. Car aerosols are very useful and these dense tissues allow the very minimum of paint to be applied.

4. Balsa strips: Slice all strips from sheet wood. It is easier to obtain light grades of balsa in sheet form than in strip and of course any desired width of strip can be made. The model framework is generally constructed from sheet using a steel rule and sharp razor blade to cut the sections.

Building the Stinson: The basic fuselage structure is a conventional stringer-and-upright arrangement joined with cross-pieces into which is fitted the CO2 tank and piping before the addition of the remaining structure. Scale configuration is achieved by adding the following structural details.

Carved and hollowed polystyrene blocks are glued to the nose framework, the upper block being vee-shaped to form the lower LE of cockpit. The cockpit roof is also of polystyrene with the inside painted matt black. Drawing ink or enamel should be used. The cockpit frames are then built up from 1/32 square, to the back of which is glued the glazing, firstly painting the frames matt black on all sides. Use Evostick for fixing the glazing, applying only the lightest trace to each frame. This arrangement gives depth to the frames and a much more realistic appearance than simply sticking glazing to the outsides. Cut a pilot base from thin card painted matt black, fix a polystyrene pilot in place and glue to the underside of the cockpit area.

that the notching of the lower support ensures that it does not show against the tissue covering. The glazing- in one strip-can then be fixed behind the frames, but again remember to paint the frames matt black beforehand. When covering the fuselage make sure the tissue is firmly pasted to the full outline of the frames so that the glazing will finally be revealed by carefully cutting around the insides of the frames. Recessing the glazing in this way also means that the tissue may be left in place until spraying - if any - is done. The effect of a separate cabin door is achieved by forming three 1/32 laminations on a card template, the inner strip of 1/32 being recessed about 1/32 in below the faces of the outer strips. Paint the gap matt black and ensure that the covering is pasted to both inner and outer frames. The slot between frames is revealed, after covering, by slicing away the tissue thus producing a space between 'door' and door frame. Radiused corners are formed from rectangular-section polystyrene fixed with PVA to top and bottom main fuselage stringers; then 'sanded to shape, smoothing into the contour formed by the upper and lower wing root fairings where they meet the fuselage.

Wings and other things: Scale construction entails a wide leading edge - to repro-duce the area metal-covered on the full sized machine - and close rib spacing. The LE is fabricated from a rectangular strip of polystyrene fixed with PVA to a vertical 1/32 balsa stiffener and sanded to shape. Sliced ribs are used with separate ailerons glued in position after covering with spots of Evostick to form 'hinges'. Wing tips are laminated on card from polystyrene, hollowed out and with notepaper glued at ends to form a root 'rib'.

The tail is of laminated strip construction with ribs sanded to shape after assembly. Note the separate control surface effect. Do not attempt to hinge these surfaces- leave them rigid. It is very difficult to achieve consistent flying trim with a moveable elevator and rudder! Glue the rear fuselage polystyrene extension to the top of the tail after covering.

Next come the stub wings and undercarriage. Cut the spar, nacelle formers, root rib and front cone formers and join together in the locations shown on the plan. The u/c wires are then fixed in position with epoxy resin. Insert blocks of polystyrene between and around all the formers and carve and sand to final shapes, hollowing out as much as possible..."

Quote: "Steve and Mary, Stinson Trimotor Model U 29 inch scale model for CO2 power, by Barry Hetherington. Another from Aeromodeller January 1988, scan by Algy2. I only had to join this one - good scan, see https://www.rcgroups.com/forums/showthread... RogerC 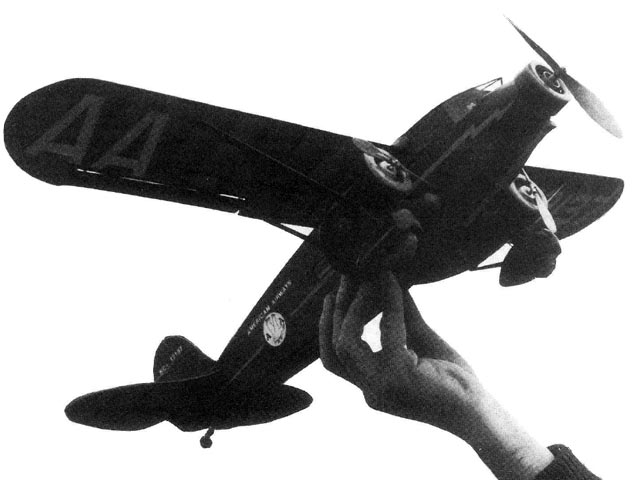