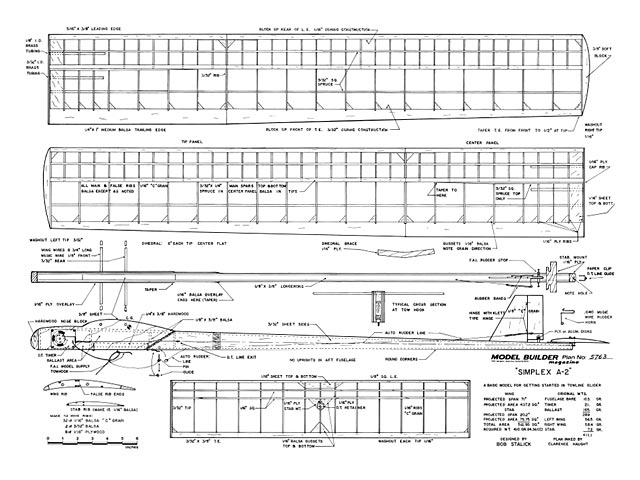 Quote: "Get into the intrigue of A/2 Nordic flying with a model that is highly competitive, yet easy to build and trim. Simplex A2, by Bob Stalick.

The Simplex was designed to do two things: 1. build and trim quickly and easily, using minimum amounts of materials; and 2. to be competitive in A/2 Glider competition. It is both.

The original glider was built in 1974 to replace my aging and worn A/2's. At it's initial contest, it was trimmed and proceeded to max during the first 3 of-ficial flights. On the fourth flight, it got itself worked into a good sized thermal and took off across the wilds of the Hillsboro flying site - never to be found again.

The second glider was built by my younger son, Tom, who had had it with the A/1 gliders he had been flying, and was ready to move up to something a bit larger and easier to fly. This model is featured in the accompanying pictures. Tom qualified in A/2 at the 1975 Semi-Finals, held this year in Tacoma, with his model of the Simplex.

The ship has an almost uncanny ability toseek out lift, and to center itself in it - have never seen it spin-out. Several times, it has been circling low to the ground below 50 feet, and has bumped into lift and worked its way up into the air again to max. In fact, with the erratic towing that Tom sometimes manages, most of the credit for his placing in every contest entered must go to the glider. It is about as goof-proof a glider as I have ever experienced. A good part of the credit must go to the airfoil, which is pirated and changed from the Lively Lady, and more credit should be placed on the wing planform and layout, which is copied from Hugh Langevin's Osprey. Together, this is an excellent combination.

Convinced? Good. Try it for your first A/2. In fact, if time is a problem, you may want to try it for your next A/2. It builds fast.

Fuselage construction: The fuselage is built very similarly to the Starduster. Using light weight 3/32 sheet 36 inches long, cut both fuselage sides from it. Pin one side of the plan and using Wilhold, glue the 36 inch long 1/8 x 3/8 longerons in place. Notice that they are in a straight line - no bends needed or wanted. When dry, glue in the 1/8 x 3/8 uprights where shown. If you plan to use a circle tow device, make that deci-sion now (I recommend the Max-Aid unit, sold by National Free Flight So-ciety, 4200 Gregory St., Oakland, CA. 94619, for $8.50). If not, use a regular FAI Models Supply Hook Assembly as shown on the plan. With the standard hook, a 1/4 x 3/8 hardwood block must be glued in place as shown.

Glue other side of fuselage in place. All of the above description assumes that you are using a very straight building board - because if you're not, you now have a bent fuselage.

Cap the nose with a piece of hard-wood block (pine or bass), sand and shape the entire fuselage. Round the corners of the boom. Fill in the area above the top longeron and between the plywood balsa overlay with scrap balsa. Sand to shape.

The wing is next: Cut out all wing ribs, using a plywood template. All ribs are identical. Cut out 1/16 or 1/32 plywood reinforcement ribs. Trim the stock trailing edge to shape. Notch the trailing edge to receive the ribs. Block up front of trailing edge 3/32. Pin leading edge in place. Put in necessary washout as indicated on plans. Glue ribs in place using Hot Stuff. Do not add plywood ribs at this time. Block up each tip 6 inches for dihedral, and glue wing panels together, using gussets as shown. Add all spars when dihedral joint is cured. Do not forget to add the tapered spar as shown - this adds tremendous strength and flexibility to the wing and is imperative if you plan to use a circle tow system. Add all triangular gussets to rib trailing edges, tips, etc, add and shape wing tip blocks... "

Update 22/09/2020: Replaced this plan with a clearer version, thanks to theshadow. 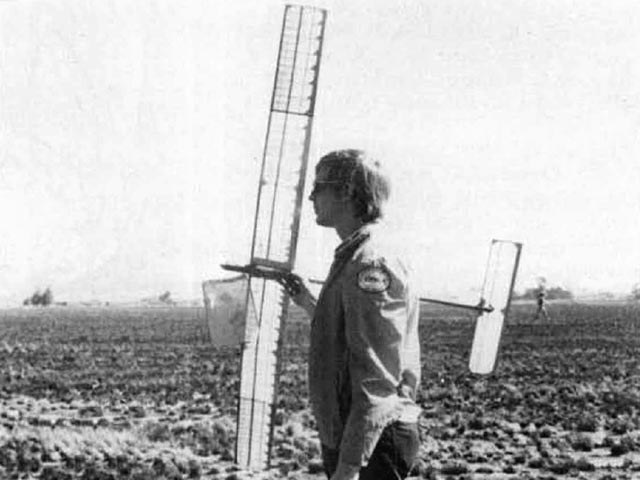