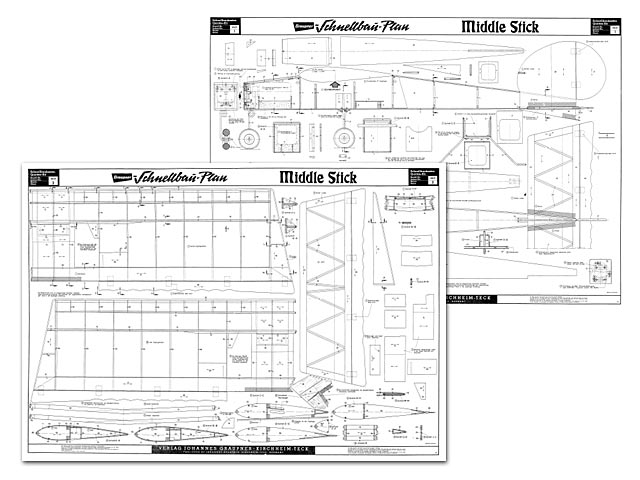 PROBABLY the second thing you notice when you open the box of this Graupner kit, are the copious instructions. Printed in four languages, together with two pages of exploded drawings, three finely detailed full-size plans, and many photographs showing various stages of construction, it is obviously designed not only with the novice builder in mind but also for world-wide sales. In view of the high quality of the wood, the amount of pre-fabrication, hardware, decals etc, the price of £15.65 seems commensurate with a large volume of sales, which is to the modeller's advantage in that the kit offers good value for money.

I did say this was possibly the second thing you would notice, because undoubtedly the first thing would be the quite hideous lines as depicted on the multi-coloured label. The compelling reason for this deliberately ugly machine is that it makes a good all-round acrobatic trainer, not only from a flying point of view, but also from the construction angle.

To the builder's advantage are the two fuselage sides which are pre-cut and pre-formed to the correct curved contour by pre-joined laminates of balsa and plywood doublers, a technique repeated from Graupner's Kwik-Fli III kit. All formers are three-ply balsa adding considerably to strength without adding too much weight. Together with pre-cut ply parts, wing ribs and spars, this kit is designed to be assembled quickly by modellers of limited experience; and yet, despite its high wing configuration, its appeal may spread to more advanced modellers in that if it is powered by perhaps a .50 size engine, a startling flight performance results.

The construction is conventional in all respects, and the speed with which the airframe is completed is helped along by the large amount of pre-cut parts. There is no doubt about it, this machine is a real 'quickie'. However, I found that the copious instructions were sometimes too verbose, and I lost my way on more than one occasion when wading through all those indent numbers and cross references to drawings, sectional views etc, with a result that the wing spars had to be remade! No doubt this was partly due to the fact that because I intended fitting a size .50 engine to it, which is somewhat overpowering the machine. I had endeavoured to strengthen the centre section of the wings during construction. It was my intention to fly the machine not only from land, but also from water with a pair of Graupner Floats fitted to it, and as I had always been told that one needed considerably more power to fly from water, I considered the extra power warranted the increases in the wing strength.

When I got the point in the English translation of the instructions on Page 6 and read the word 'demented' instead of 'cemented' I felt the time had come to go it alone, with the result that the construction proceeded very rapidly. However, when one is test building a kit, I feel it is necessary to follow the instructions as closely as possible in order that a true assessment of the kit is made, and in doing this I discovered that the instructions for building the wing main spars bare no resemblance to the diagrams or cutaway sections,
hence the difficulties I ran into with the wing strengtheners; and yet despite my criticisms, this kit should be readily, and easily, constructed by modellers of limited experience, or limited time.

The airframe presented no further snags from the point of view of installation of radio gear, undercarriage units, or engine; and within a fortnight or so of evenings the completed air-frame was ready for rubbing down and covering.

As is my practice, and especially due to the fact that I was to fly this aeroplane off water, I applied several coats of sanding sealer to all of the bare wood parts and especially inside the plane where I felt there might be a chance of water seeping in. After sanding off, the wings were covered with heavy nylon applied wet, and tightened with three coats of heavy, clear dope. The whole aircraft was then given a coat of clear polyurethane lacquer again with careful attention being paid to the interior of the structure. Finally the machine was finished all over in black gloss polyure-thane paint, with the wings taking two coats, and the fuselage, tail, vertical stab, rudder, elevators and ailerons all having seven coats of paint and being rubbed down between each coat with 3M wet-or-dry 400 grit paper.

As is my habit, the installation of the gear had been left until this point and, with the exception of the aileron control rods, which had already been installed prior to covering, the elevator, rudder, nose wheel, and throttle push rods were now installed together with the positioning of the servos and the installation of the fuel tank, radial mount, and motor. Although the fuselage is somewhat narrow no difficulties were presented, especially as I was using Sprengbrook Radio with Microbe servos. I have no doubt that if one were using Graupner/Grundig R/C gear the installation would have been very much simpler owing to the fact that supplied with the kit there is a full-size radio control installation plan designed specifically for the Grundig gear, together with several pre-cut plywood components designed to accept Graupner servos.

On the day I opened the lid of the trailer at the flying field much interest was created when I lifted the machine out and, having completed the preliminaries, fired the engine, and taxied it around. All seemed well, and so turning into the wind I opened the throttle and heave ho'ed at what seemed the appropriate speed. The aircraft took off, as had been expected, and flew quite satisfactorily with only one or two trimming corrections having to be made.

On the first flight, within a few minutes of getting the feel of it, I had looped, rolled and spun it. The flight characteristics appeared to be viceless especially in the spin, in that, owing to its high wing configuration, a great deal of inherent stability permits a very rapid recovery. Such was the confidence gained in the handling of the machine that several very low passes were made.

As I mentioned, the plane will appeal to those just starting in multi WC modelling or who have limited flying experience. I felt it was an excellent trainer for my wife to learn on, so after two or three flights she was handed the box. It says much for the strength of the airframe that, when it was pulled out of the ground, the damage was not too great being only confined to decimated servos, shattered motor and buckled wheels. (Even I've never bent a DEAC!) So when I can afford to have these put to rights, the airframe will be ready to go once again.

I am sure that this machine represents good value for money and is likely to attract attention from all who want a quick and easily constructed weekend fun machine."

Instructions booklet - in German language only - 24 pages, very detailed, with parts list and several assembly photos, thanks to Meinhard Buechner. 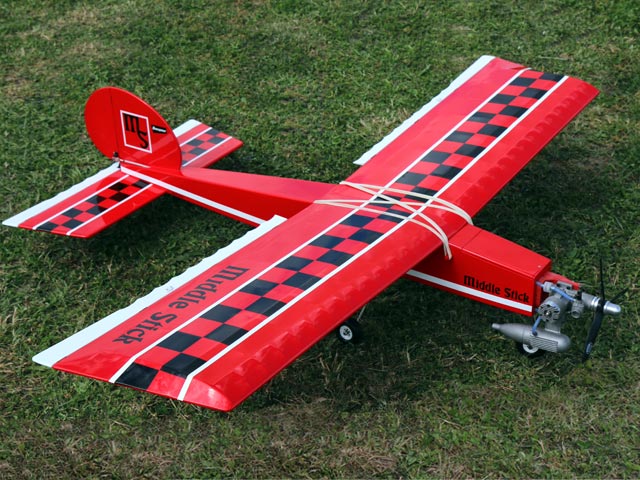 Photo of the Middle Stick [pic 008] was found here: - http://www.koralpe.biz/middle%20stick.html where there are lots more photos and useful original kit drawings.
SteveWMD - 17/04/2013
Saw your middle stick plans. I got given a sealed middle stick kit yesterday. Plans a bit eaten by fish moths but still useable. Instruction book in German and English. Kit has all wheels and balsa precuts. Going to be my first build so looking forward to it.
wasabi - 10/04/2015
Hello Outerzone team, Here is a photo of me from 1972 [more pics 006]. It is a Middle Stick with an ENYA 35 and a Multiplex Digitron 6 channel radio. The engine had been running for 100 hours, but it was only possible to start by hand. Setup on WEBRA 40, and ground takeoff and aerobatics were already possible. The model was in operation until 1975 and was disassembled when the balloon was pierced. Best regards,
Oskars Spridzans - 11/05/2020
Hello Outerzone, Passionate about vintage, I rebuilt a Middle Stick from the Graupner design. It was my first plane in 1978 and it got smashed, mended, broken, mended, etc! Then it ended up completely destroyed by old age and I had promised myself to rebuild one. It's done, powered by the famous 40 FSR of the time, and of course with the decor of the Graupner catalog [main pic, 009, 010].
Thierry Bordier - 07/06/2021
Add a comment