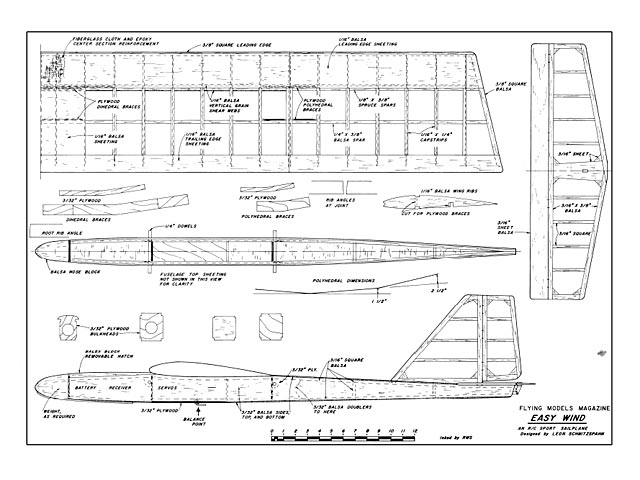 I learned to fly R/C with a slow, floater type sailplane. This sort of model is deservedly popular as it does a good job for beginning fliers and is just the ticket for easy thermalling on a calm summer day. As my flying ability improved, I became aware of the drawbacks of the floater type soarer. When flying in windy weather, this type has a very limited ability to penetrate into the wind. I flew through one winter season and on gusty days, the whole flight would be made with the model headed into the wind. A downwind turn lost ground which was difficult or impossible to recover from.

After my light soarer was destroyed on a windy day, I decided to design my next sailplane myself. The essential requirements were good wind penetration, sturdy construction, easy building, and reasonable performance. The Easy Wind is the result.

The wing airfoil was the primary concern to get good wind penetration. The well proven Eppler 205 section was my first consideration; it appears similar to a flat bottom floater section with more Phillips entry. After weeks of looking at airfoil sections, I went for the Eppler 205, eyeball averaged with a Mike Bame airfoil, and thin enough for some speed. I felt a good thermal capability would still be retained with a large enough wing area; that translated to a wing span of 78 inches, giving an area of almost 800 square inches. The wing is constant chord for easy scratch building construction; that leaves only one wing rib pattern to be concerned with. Polyhedral was added for good turning ability with rudder.

The wing is strong and has been designed for spruce spars with vertical grain webbing, sheeted D-tube leading edge, and plenty of plywood dihedral joiners. For easy transportation, I first had plug-in outboard wing panels using wire joiners and brass tubes built into the wing panels. It worked, but a one piece wing version is simpler and at 78 inches wingspan, it will fit into most small cars anway. The fuselage is all balsa sheet and strip, as light as possible with reasonable strength, just as are the very light tail surfaces.

The plane flies very well! It's just what I wanted; I can fly on windy days without concern, always able to penetrate upwind. Loops are easy and it can even fly inverted pretty well. I enjoyed the inverted flying so much the first time I tried it, I almost forgot to recover to upright flight until too late.

The generous wing area, I assume, is responsible for the still good thermal performance. I've had many long flights from only a mild hi-start launch. In my first club sailplane contest, I let two other members use the Easy Wind in the event. Much to my chagrin, they both placed higher than me - with my plane. Coming down from a good thermal altitude is good fun while doing loops, high speed turns, and flying inverted..." 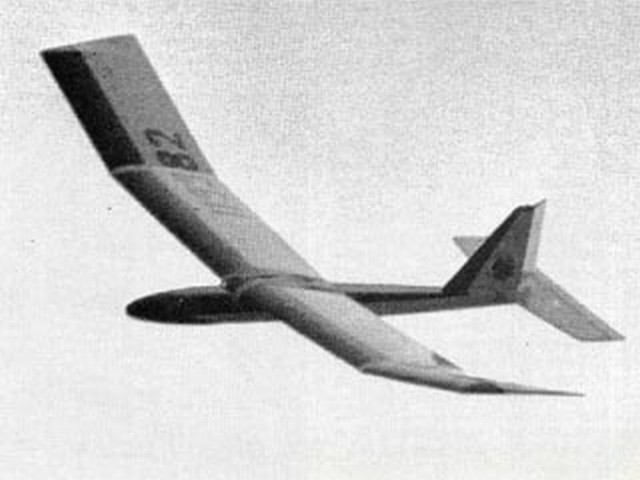