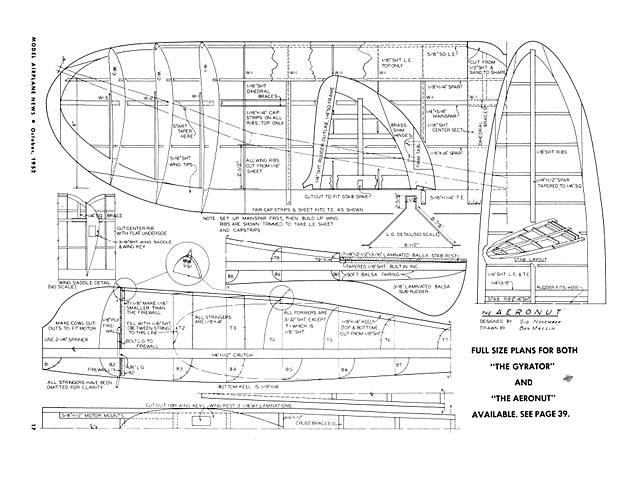 Quote: "A good free flight is like a thoroughbred horse. Its ancestors are important. Already a consistent winner, this job is for the guys who know how to handle an airplane!

This ship is a composite of most of my contest winning jobs. In it you will find incorporated some of the best features of each of them. Influenced by other fellow Aeronuts, I arrived at this streamlined version of a consistent contest flyer. A ship of this type took first in B in one of the Gas Monkeys' open meet. In the previous year these ships were up in the first three places. The A-B version is designed to take from a Torp 19 to a Foster 29, or any motor of similar power. The original has a Torp 19.

Study the plans carefully and read the instructions thoroughly. If closely followed, the builder will find many hours of enjoyable flying. There are also two other versions of this job, an .049 and .074-.099. Dimensions of these will he found at the end of this article.

You will notice that conventional crutch construction is employed. However, because of streamlining and fairings, if you adhere closely to instructions and plans you will find the fuselage quite easy to construct. When the crutch is dry do not remove from board. Build superstructure right on top of it. With this method you will find that no twist or warps will develop. You will note that the firewall is backed up by two bulkheads, T1 and B2. The firewall is put in after the upper half of the fuselage is complete and only after B2 is in place.

The formers are cemented directly to crutch. Note carefully the position of the wing rest and the top keel. Have both these items in before placing the stringers in position. You will notice the stringers are omitted in the front for the sake of clarity. Be sure to put them in. Stringers go to T1 but not to top part of firewall.

The bottom formers and stringers are put on the same as the top; however, you will notice the keel and stringers go from the front of the fuselage, former 81 to former B10. The motor mounts shown on the plans are for the Torpedo 19. For other motors, make proper allowances to fit. You will notice that the tail rest has built-in incidence. Build it accurately according to plan.

After all the stringers are in place, bolt landing gear to firewall. Put the wing hooks in place (1/16 music wire). The hooks are so made that even if they loosen from the cement the rubber tension will still keep the wing firmly in place, These hooks also allow the wing to fly off in-the event of impact. After this, fill in with 1/16 sheet between stringers as on plan. Put subrudder in place, fairing it with soft balsa. Mount motor. Cowl is built up and faired around the motor..." 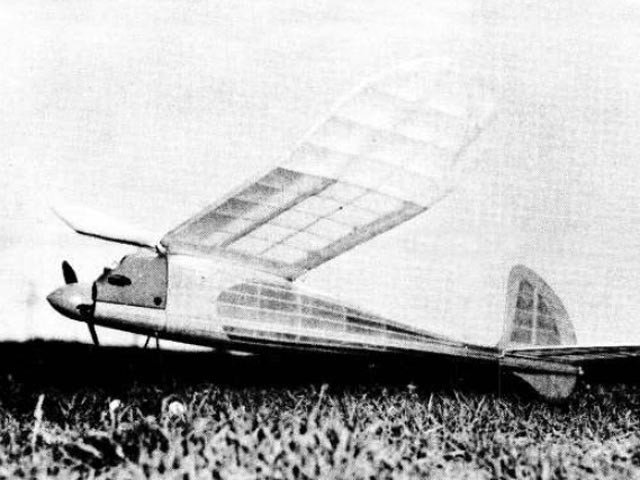