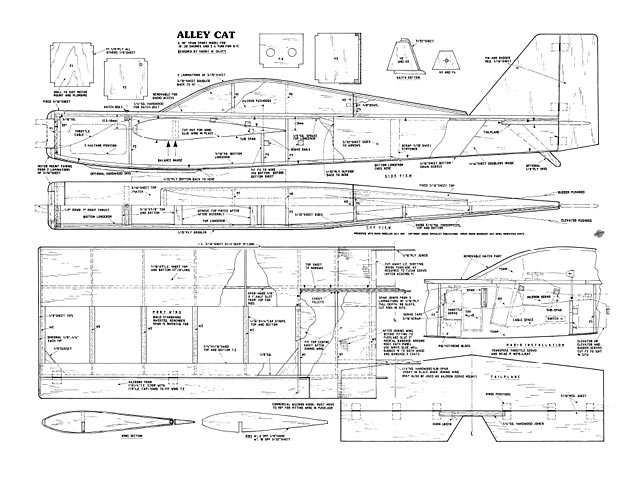 Why Alley Cat? Well an alley cat, the feline type, is usually a tough little character who will take on anyone who ventures into its territory. That description fits this 38 in package of balsa, film and radio gear - especially with an OS15 FP (ABC) up front. Then it will challenge - and most times 'see off' - your average Club 40 sports model, both in speed and its aerobatic capability.

History: Over many years of building and designing for R/C I have always been intrigued by the challenge of producing a really good small model. This has resulted in a few what might be termed 'average' aircraft, a couple or so of what I call good designs, and quite a few of 'well it flies' packages.

Over the years the improvement by lower weight and smaller size of general R/C equipment, together with lighter overall finishing techniques (Solarfilm, etc), and vast improvements in small engine performances have, in all, given a far better base formula to work from. With regard to modern power units, I have also had satisfactory and promising results using the new generation small four-strokes in 38-40in aerobatic models - but that's another story for a later date.

Despite the improvements in equipment we still had the design task of holding the engine, R/C gear, etc together, and defying gravity - in other words, the airframe. After many spare moments at work and home, doodling outlines, packages, structures, and pushing calculator keys, the concept of the Alley Cat family was born; the requirement being to provide a modern day Ugly Stik (oz5175) concept of fun aeroplane. I also decided to utilise to the full, standard 36in wood lengths (who said, but it's 38in? - read on non-believer); a one piece airframe for both maximum space package to bury the gear, etc, also accurate line up and strength/ weight ratio. (Fingers crossed, my calculations would be right!).

With recent reductions in servo costs, the use of mini servos is not as prohibitive as a few years ago, so the formula arrived at really requires at least one mini for full house; two is better, but the combinations of radio and power variations are many. and indeed suit all pockets. However, the airframe construction is not relative to number or type of servo used, so let's get on with the 'wood chopping'.

Construction: First step is to make two templates - one of the full wing section outline. This can be cut from card, and the usual 1/16 ply template for wing ribs (there are only 16!). Pin all blanks together, sand and razor saw cut half depth spar slot. Kit the remaining wing parts to sizes on plan and commence the wing build. First pin down bottom 1/16 trailing edge..." 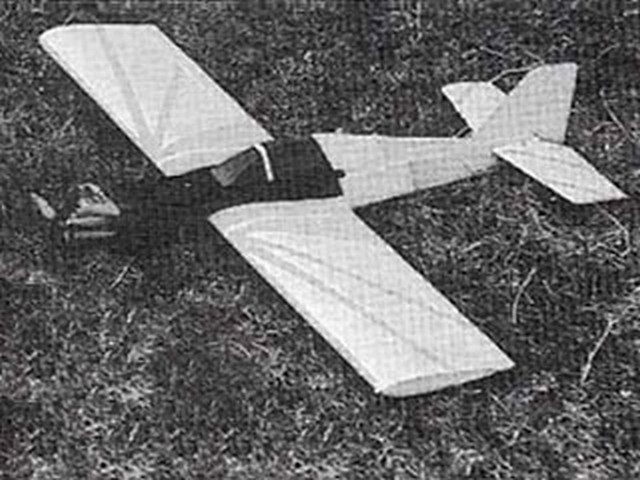