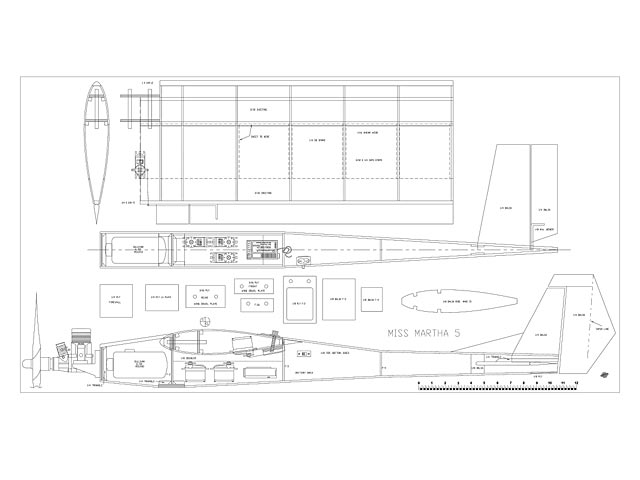 Note this is a modern re-drawn plan.

Quote: "You don't have anything on the 'Miss Martha' R/C fun fly model from the 1980s on Outerzone. I created these photos [model photo & more pics 003, 004] & this PDF from sources on the internet when I couldn't find copies of the kit plans. Roughly, it has a 47 inch wing span, uses a two cycle .40-50 size motor & needs a four channel radio. I don't know who designed the Miss Martha or if it was ever kitted. I saw one fly many years ago, I can remember it being really fast for the size motor it used, I think it was a TT .36? & it was really aerobatic. Tight snap rolls, one after the other."

Dedicated fun-fly airplanes have spawned their own class of model. This one offers robust construction and a wide flight performance envelope.

I was asked to review a plane called Miss Martha about three weeks after our club sponsored a well-attended fun fly contest. I had no plane to fly at this event so I was a good club member and helped time, measure, and pick up parts of planes that hit the poles that held the limbo stick. Come next year and I'll be able to find out first hand how those stationary poles are able to swat planes!

Miss Martha is a Model Engineering kit (5540-105 Atlantic Springs Rd., Raleigh, NC 27604; 919-954-7222) that was originally designed by Robert Richards. After opening the box you realize that everything you need to frame this plane is included. All you need to bring to the workbench is an engine (.25-.40), wheels, fuel tank, glue, hinges, and your favorite covering. This kit is so complete that in addition to all hardware, bolts and screws, even a 10-32 tap for the wing bolts is included.

Wing. Construction of the familiar D-tube wing is unique. The wing is built as a single, full span assembly. Two pairs of 1/4 x 1/4 x 36 balsa are bevel cut and glued to form the top and bottom main spars. One of the joined spars is glued to the upper edge of the rear plywood dowel support so that the upper edge of the plate and the spar are aligned and the plate centers over the spar glue joint. The lower main spar is aligned with the lower edge of the dowel support plate in the same manner.

Wing ribs are die-cut and easily pop out of their 3/32-inch balsa sheets. The center ribs and wing tips are die-cut from 1/8-inch balsa. The 1/26-inch balsa shear webs are factory cut and come stacked together. Hold the entire stack and lightly sand all edges until they match perfectly.

Each center rib slides between the spars and up against the dowel support plate. Square these ribs with the support plate and zap all joints. The remaining ribs are spaced evenly by the shear webs that are glued between the main spars. Keep the bottom spar against your building board and place a long straight edge against the upper spar as each rib and web are glued in place. There is no need to pin everything down since this method keeps the spars straight and parallel as they evolve into a rigid structure. Trim off the excess spar material outboard of the tip ribs. Keep all scrap pieces while building this plane. All scrap will be recycled for future use.

Ribs are kept parallel with a scrap piece of shear web balsa as they are glued to the trailing edge assembly. The 1/8-inch balsa sub rib is glued in at this time. This piece is intended as an aileron servo mount support. It will hold the 1/4 x 1/4 x 2-3/4 inch hardwood servo rail. Make sure your servo will fit before you glue in the sub rib. The upper trailing edge sheeting is glued in place and trimmed off. The excess sheeting will be re-cycled into the center section sheeting. Glue in the hardwood front spars.

The leading edge sheeting is joined and sanded just as the trailing edge sheeting was prepared. Use a straight edge to trim each sheet to a width of 21/2 inches. Glue in place by first adhering it to the main spar and then working it over the ribs. Remove the wing from the building board and glue on the bottom edge sheeting. Glue the beveled leading edge pieces in place. Glue balsa tip ribs in place and sand the leading edge to shape. The upper and lower center section sheeting is made from recycled leading and trailing edge scrap. Cut a small opening in the lower center section sheeting to accept your aileron servo. Cap strip all remaining ribs. Strip aileron stock is cut to length with the scrap pieces used for both the center of the wing and at each wing tip. You now have a straight, strong, warp free wing.

Fuselage. Begin the basic box fuselage construction by drawing a center line on all four bulkheads. All appropriate holes are drilled in the firewall and the plywood landing gear plate. Bulkhead F-Z is centered on and perpendicular to the right lite ply fuselage side. Triangle stock is glued in between each bulkhead and runs the length of the bottom of the fuse. The top triangle stock extends from the rear of the wing saddle to the end of the fuse..." 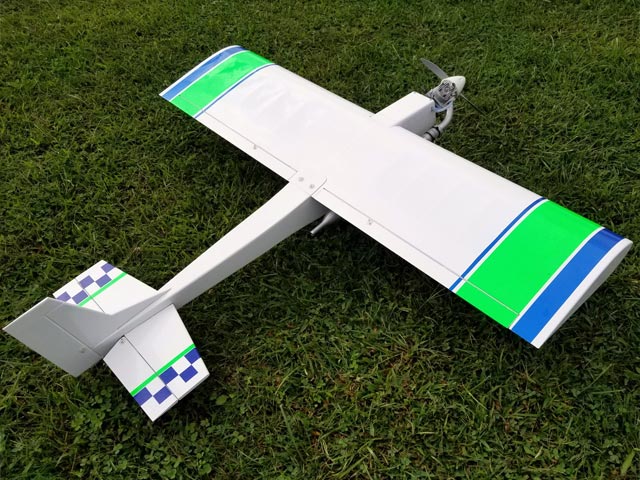