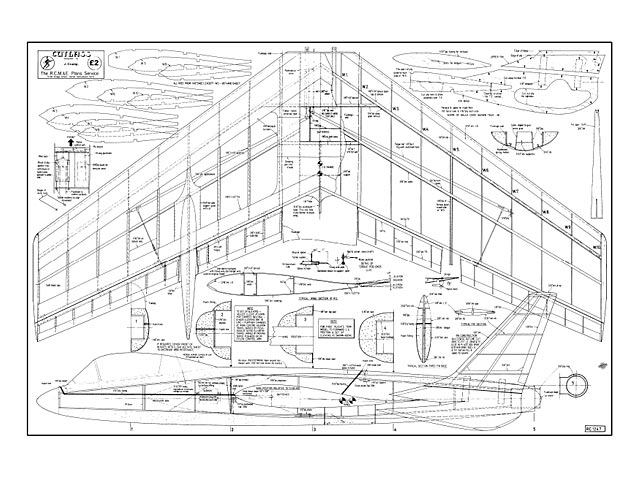 Quote: "From New Zealand - a spectacular 57 in span slope soaring replica of the Chance Vought fighter. Convert it to power if you can!

THE Chance Vought XF7U,1 first flew on September 29th, 1948. Nineteen of that model were produced and used for carrier evaluation work. It was reshaped extensively, more powerful motors were fitted, and it was accepted by the US Navy under the name F7U-3 'Cutlass'. The production version had a wing span of 38 ft., length of 41 ft and a height of 11 ft 6 in. With a weight of 20,000 lbs normally loaded, it had a maximum speed of 750 mph and a climb rate of 6000 ft per minute, and a ceiling of 50,000 ft.

Our model is the XF7U-1 which to my mind had the most elegant shape and scales down to a model of 57 in span, a weight of 106 ozs!

Ever noticed how elusive that 'perfect' soaring hill is? Despite living in a hilly area - Wellington, New Zealand - and regardless of the fact that we're surrounded by a steep coastline, a good spot had been difficult to find. The usual problems arose - too turbulent, no landing area, too close to the local airport, flying field nearby being used by power fliers, 'a good hill, but who's going to cross a stream and then climb for 45 minutes' etc.

One site, Titahi Bay had been used a few years back but seemed to have gone out of favour. About 30 minutes drive from the city with high steep cliffs down to the sea and good grassy landing areas, it seemed ideal except for the prevailing on shore wind which at Titahi is frequently double the strength of the wind elsewhere. Obvious answer - a heavily loaded, clean ship for penetration.

In a year of slope soaring, I had noticed how most of the models being used are the usual slab-sided, straight-winged designs. To me, there's not much excitement in seeing these time after time on the slope. I felt the urge to build something different! Modern jet lines are to be admired. It had to be rugged for those turbulent zone landings, would need to fit into the average car without difficulty and would need to be acrobatic.

The Cutlass came to mind. 'Never!' said Terry Bannister (an aerodynamicist friend), and promptly delivered a plastic scale model, ideas and much enthusiasm. An outline was drawn up, wing section selected, control system planned and within the week, construction was under way.

The following points were considered important and were built into the design although in some cases at the expense of scale fidelity.

1. Wing span and chord were increased slightly in an effort to achieve a reasonable wing loading, say 16 oz / sq ft, maximum.
2. The width of the body and fins were reduced so that frontal area and thus .drag would be kept to a minimum.
3. The nose was shortened and rounded off - the plastic model's probe had been broken off anyway. The moral was obvious.
4. The wing section became semi-symmetrical, approximately 16% thick with a gently reflexed trailing edge in an effort to achieve flowing lines and once again lower drag.
5. The fins were designed to snap off in a rough and tumble landing. These have not been put to the test yet, landings proving very easy with a slow, nose high approach despite turbulence, high winds etc. 6. The cockpit and pilot were enlarged slightly - this being a personal thing. I like to see that the machine is inhabited from a reasonable distance, also, the orange crash helmet shows up well and provides a good reference point.

Despite these changes the model looks (to my jaundiced eye anyway), spot-on in the air and performs well up to expectation. First though, to build it!

Fuselage. The construction system used is similar to that used in several radio control glider kits on the market. A simple 3/32 balsa box forms the 'skeleton' around which the styrofoam 'flesh' is contact cemented. Use medium balsa for the box and 1 lb per cu ft styrofoam with as little contact cement between the two as possible. (Unnecessary weight must be watched throughout the construction).

After gluing the slabs of foam in position, carve to the approximate shape with whatever tool you prefer. I use a 'snap-off' type wallpapering blade which, when new, is extremely sharp. Note that the balsa box has a keel running along both top and bottom. This gives a line to which you can carve.

Having completed the carving and sanding. contact cement medium to soft 1/16 in. sheet balsa over the complete form. This is a fairly quick and very rewarding job. Apart from small fillets, the whole fuselage can be covered with about 8 to 10 pieces. Once sheeted, add nose blocks, intake supports, jet tubes, etc., and sand smooth..." 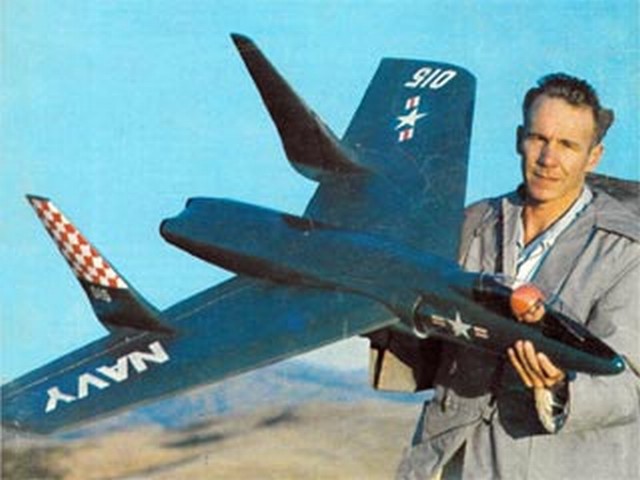