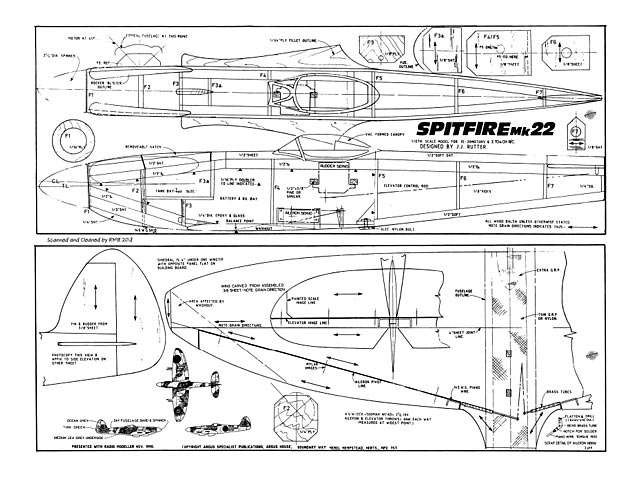 I can hear the groans when readers look at this article, 'Not ANOTHER Spitfire!' I tend to agree with the sentiment but was nagged into the model by my five year old son who still thinks that everything with camouflage, a prop and roundels is a Spitfire. Mind you, having finally built a Spit, I'm quite pleased because it's a lovely plane to fly and looks very realistic in the air.

So what's different about this one then? For a start it's a late mark, which is less often done than the earlier ones (I prefer the looks) and there is very little trouble producing a very accurate outline to the wings, they're simply cut from sheet! I also used only two channel radio gear which keeps costs down as not only don't you need the more expensive R/C gear, you don't need a throttled motor either. Three or four channel gear could be fitted in quite easily should you feel the need. though.

The big bits! I always like to get the big bits out of the way first so I started the construction with the flying surfaces. Just for a change I'll describe the tail end first. The fin and rudder in my model were a fixed single piece of 3/8 in soft balsa, thick to give a more realistic shape as well as a wider rear fuselage and light to keep the noseweight down. Other than cutting out and shaping there isn't a lot to it really. The rudder could be made functional if you felt like it and had four channels to play with.

The tailplane was 1/4 sawn (stiff) 1/8 in balsa but keep an eye on the weight again. This is cut and shaped as for the fin before cutting away the elevators. I used an internal horn silver soldered to the 1/4 gauge piano wire joiner to keep things neat and avoid having only one half of the elevator rigid. A link to only one elevator half often results in 'screwy' loops; the elevators are centre hinged with strips of mylar after giving the leading edge of the elevators a "Vs shape.

The wings are a little bit more complicated to make than the other surfaces but not too bad. Obviously they are too wide to make from one piece of wood, and the steep forward rake of the ailerons means that grain of the rear half has to be swept forward too... " 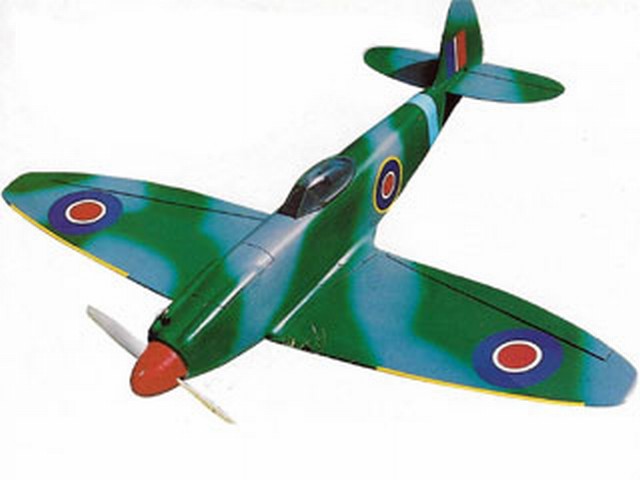