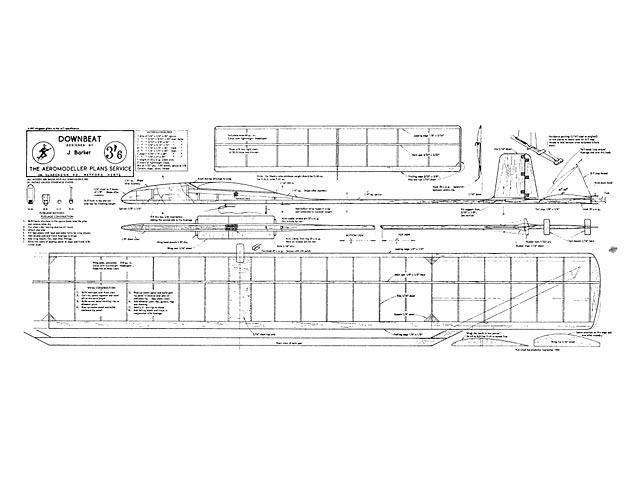 Naturally, the ideal way of introducing oneself to model flying is through an elementary kit type; but limitations of performance soon create a wish for bigger stuff. However, one does not have to think in terms of an enormous model for the A/1 glider class offers a handy size coupled with excellent performance. In fact, Downbeat has already placed 2nd in two well supported events and its simple construction makes it an ideal follow-on model for anyone to start after their first basic efforts.

The only unusual feature is the this tail boom and here we must positively emphasise that provided you use I in. square spruce as specified, this boom will not break. Its inherent resilience and springiness will be of great value in any heavy landing. The reduced cross section increases performance by minimising drag.

Concise building instructions are included on the plan itself, but since the assembly follows a standard system, it might be as well to run through the system of assembly now.

For one with limited experience, it would be better to start with a small component such as the tailplane, which is made by pinning down the leading and trailing edges directly over the plan after covering the plan with a waxed paper to prevent the excess cement which spills from the joints, from sticking to the plan.

When the edges are in position, add the ribs and then the spar, completing with the outer tip ribs which do not carry spar slots. Be sure to keep the tail flat and free from warps.

We can now move to the wing and in this case first make up the mainspar from hard 1/8 x 1/2 in balsa over the front view as indicated on the plan. Note the generous tip dihedral for good lateral stability. Having cut all the ribs and pinned them together in order to sand them to the same length and identical curvature, we can start by building the centre panel..."

Plan from DBHL, cleanup by Circlip. 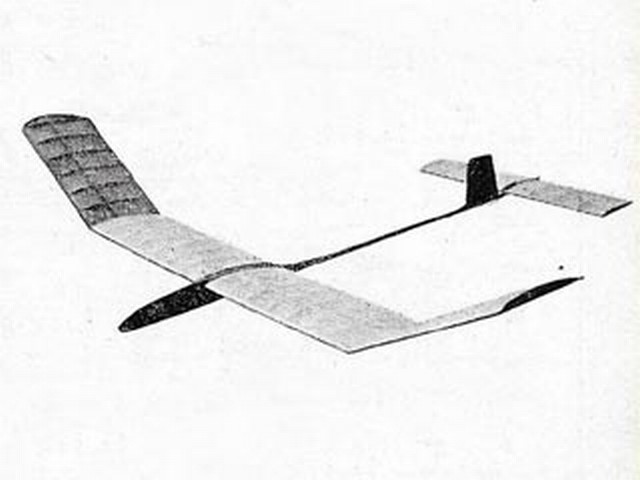