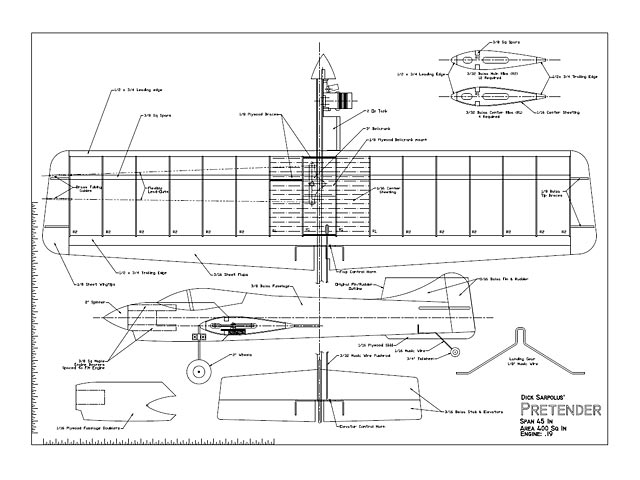 Quote: "A .19 POWERED Stunt Ship isn’t about to win the next Nationals; however, there are some good reasons for building a .19 sized model. This one was designed primarily for use as an intermediate trainer – my son had learned to fly and to handle the basic maneuvers on.049 powered profiles. We thought a capable .19 model would be good for a lot of practice flying and some crashes, before going to the full size .35 or .40 powered ships. The .19 is big enough for plenty of line tension and the feel of a large model; it’s also easier to build, smaller so more convenient to carry around and cheaper than a bigger model. For a sport flier who isn’t aiming at the contest circuit, this size model is more than adequate for casual fun flying. It is capable of going through the complete pattern, if the pilot is too.

Wingspan is 45 inches, wing area is 390 square inches, and the length is 31 inches. Flaps are sued, of course, for good flying ability. Structure is simple; the profile fuselage is the usual balsa plank, tail surfaces are sheet balsa, and the wing is a basic built-up deal. No planking or cap-strips in the wing, only leading edge, trailing edge, and two adequately sized spars. Conventional metal horns on the flaps and elevators, wire landing gear out of the fuselage, and a long tail wheel leg to position the model for smooth take-offs and landings. An adjustable lead-out guide and adjustable tip weight arrangement could be included, so that the model could be fine-tuned; for our purposes these features were not used.

The overall styling of the model is attributed to my son, Rick. It’s really an enlargement of a .049 model, which he had designed some time earlier. To arrive at the styling, he searched though several years of “Flying Models” back issues to get all of the control line aerobatic models, which had been featured. With the plans of all these models handy, he selected the features he preferred, and combined them in his ’Little Brother’ a Tee Dee .049 powered profile, flapped model, which performed very well. The ‘Little Brother’ design was published in “Aeromodeller” magazine. There is a lot of Jack Sheeks’ styling influence here’ I am impressed with Sheeks’ ability to crank out such a variety of good control line models; will have get is secret.

The Fox .19 used in this model really surprised us with its power. Not having flown a .19 model in a long time, I rolled out a set of 52-foot lines at first. Not good—plane moved much too fast; a set of 60 foot lines slowed things down a little, but that Fox .19 really pulls. More than enough power. The fox muffler also used is a lightweight unit that saves the ears a little.

Going on to the construction, we usually start with the wing. Once it’s built, the rest of the plane somehow gets done to go with the wing. There are only sixteen ribs, so even it you don’t have a jig saw to stack cut them, backing them out one at a time doesn’t take too long. The leading and trailing edges should be planed and sanded to shape, and the rib notches cut in, before starting assembly..."

Quote: "Hello, I got poor copy of Dick Sarpolus' Pretender from the internet, pasted it into AutoCAD. Then I traced it and re-arranged the format, so that it is not an outright copy. The airfoil was a problem, he didn't use a standard airfoil; he just faked one in (probably using a French curve several decades ago). It has a sharp leading edge which makes for bad stall characteristics, but it was what he used, so it's what I drew. They also seem to have had problems with the Fin/Rudder. There are two drawings available with different Fin/Rudders, I drew one and show the outline of the other. After all of that, I converted it to a PDF file. I also copied the article text from 'Flying Models'... Alan" 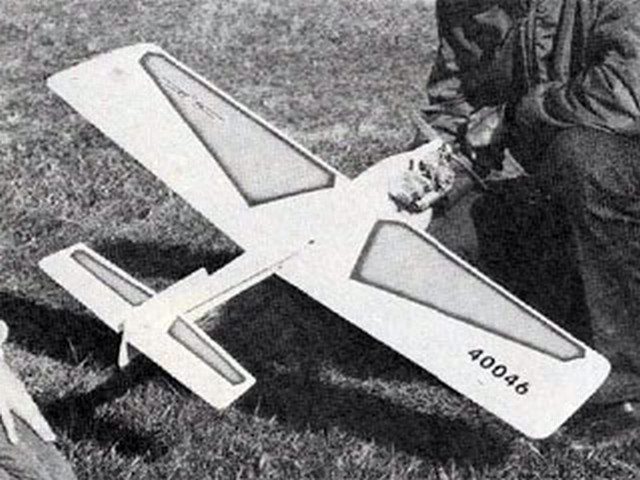