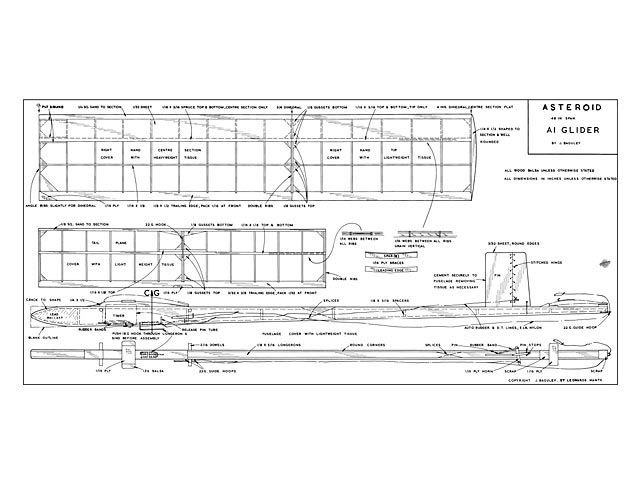 Update 12/06/2020: Added kit instructions and printwood scan, thanks to RogerClark.

Update 15/06/2020: Added 10 page 'article', thanks to DavidHolland. This is collected from Aeromodeller October 1973 (onwards) and forms part of the series titled Back to Square One. Covers construction of the Asteroid model.

Quote: "Back to Square One: Continuing our beginners' series with a slightly more advanced subject.

FOLLOWING a two-month breather, we continue now with the next step up the ladder from the previously detailed Mercury Swan. The model chosen is the Asteroid A/1 glider, fitted by St Leonards Model Supplies (as advertised in this issue). Why another A/1 glider, and why another Jim Baguley design?

The reason behind the latter question is easy - just pure chance! However, the design itself was chosen rather more carefully. The wing and tailplane construction is relatively straightforward, especially as die-cut ribs are supplied, yet the techniques employed are up-to-date and in common with many larger gliders now being flown, ie the spars are fully webbed, a sheeted leading edge is employed and both spruce and balsa spars are employed. In addition, the fuselage shows a type of construction more likely to be found on recently published plans, and is designed to carry a clockwork dethermaliser used in conjunction with an auto-rudder. Both are commonly employed techniques on all sizes of gliders, and we shall detail their operation in the near future. All in all, a very 'modern' design, and once one has successfully accomplished such a model, then one could safely tackle the construction on most gliders.

Again, perhaps we should make it clear that while we will detail the construction of this particular model, it is not essential that the novice should build the same design - many of the points covered during the construction of both the Swan and the Asteroid will be common to other designs. Also, points that have already been covered in construction of the first model will not be repeated in such detail, unless a new approach is to be explained.

As for equipment, only the tools - there are no essential 'extras' to buy! Our comments on adhesives still apply, of course - that is either balsa cement or a PVA glue may be used in most instances, depending on your own preference.

Now for the model itself. Start as ever, by carefully studying the plans and the instruction leaflet so that you get a clear idea of the order of building, and that you know what each part is called. Tape the plan to the building board, and cover with polythene. Tape the polythene in place so that there are no wrinkles left.

The ribs have been die-cut, which is a major time and effort saver! You can probably just press out the wing ribs, but take care not to damage them. If they do not press out easily, then lightly run around the outline with a modelling knife. You may find that the spar notches need a little help from the knife blade.

Now, mark the positions of the ribs on the trailing edge (making sure that it is the right way up!), then notch this for the ribs. The notches must be 1/16 wide, 3/32 in deep. This may be done with a balsa knife. but the easiest solution is to use a small file - RipMax now sell suitable small files - the one we used gave a very nice 1/16 in wide slot. Ideal! The trailing edge material in our kit proved a little 'rough'. so we chose to sand it smooth at this stage, rather than when the wing was assembled, as the ribs could easily be damaged. To do this, place the material near the edge of the building board and sand with a sanding block faced with a fine grade of sand paper. Do not press too hard, and sand in long sweeps along the length of the grain. Turn over and sand the opposite side. The wood may now appear 'bowed'. If it is, lay flat and sand on the opposite side to the bow - this will remove the warp.

The front part of the trailing edge must be packed up 1/16 in to suit the airfoil section (see Figure 2), so remember this when pinning the trailing edge over the plan. Also, at this stage check the length of the ribs - some of ours proved overlength. Remove the excess. if any, from the trailing edge end. Now is also a good time to check the accuracy of the spar slots in the ribs. Take a piece of spruce spar material (both 1/16 x 3/16 and 1/16 x 1/8) and check that they fit each and every rib without any force or crushing of the balsa. Actually, all proved fine in our kit, but it is always worth checking - good practice, in fact! Also, if you do have to enlarge the slots to fit the spars, then always take material from the same side of the slot, ie either the front or rear, never a mixture of both.

Take three ribs, and lay (do not glue) them in position at the centre and each end of the panel -this is in order to check the position of the leading edge, which may now be pinned in place. Cement two pairs of ribs together (these are for the dihedral breaks), and then we are ready to begin the actual first stage of assembly..." 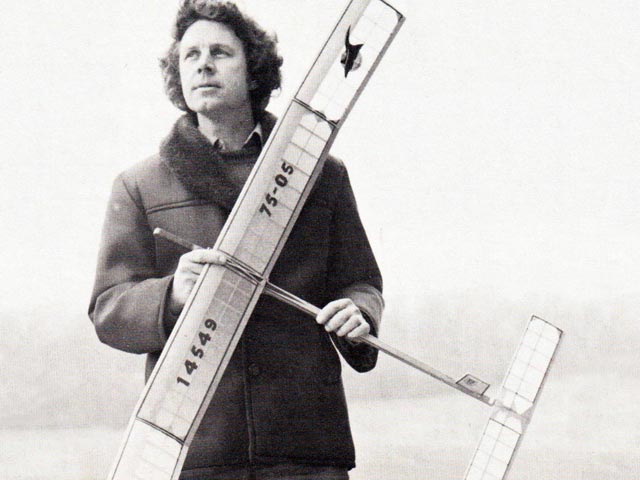