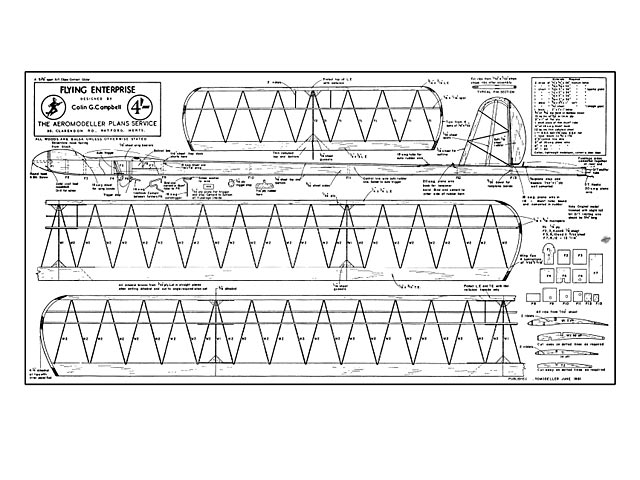 Quote: "A 51-1/2 inch span contest winning A/1 from bonny Scotland, by Colin Campbell.

IN 1950 when Aeromodeller introduced a series on design, I began the evolution of originals in the three main F/F classes which evolved into my present 'stable' of competition models. Of first designs, most successful were A/2 and lightweight gliders, both of which ended in the sea. On January 31st 1954, we had our first local event using the 164-ft. line. The lightweight I entered flew right over the town on the third flight, winning the competition, but was never retrieved.

Date of the summer competition for which this glider had been built arrived to find me committed with other models, so in a last ditch effort to have a glider I converted an old Wakefield wing and tailplane fitting it to a sheet fuselage to make a tolerable glider, and this 'bitsa' managed to scrape top place with thermal assistance. Bitsa was promptly dubbed 'Flying Enterprise' after the news headline story that year of the saga when Captain Carlssen stayed aboard till his ship sunk under his feet in the Atlantic.

When Aeromodeller introduced the A/1 formula to this country in 1955, Flying Enterprise was modified with old Wakefield wings and tailplane and flew until long overdue for replacement despite the fact that its RAF 32 wing-section was hardly suited to a competition A/1.

The lightweight Sigurd Isaacson 53009 wing-section and the present A/1 which lay incomplete until late 1959 incorporated a section vaguely similar to Isaacson's, but drawn with French curves to suit spar positions I had chosen. This new Flying Enterprise - which has taken two local competition firsts to date and did a max on its first flight on New Year's morning - was given a Warren girder wing and tail structure because a trial of geodetic wings proved overweight and lost the section profile without riblets. The Warren girder was an attempt to compromise and with good quarter grain 1/32-in. ribs it gives a strong springy wing of quite high aspect ratio. Tailplane is still much of a rubber duration type with Warren layout. The fin also escaped from my rubber duration collection while the rudder hinge is more substantial than thread or tape affairs. Built up fins seem to do better than solid sheet. Laminated wing and tail tips were used for their neatness and strength.

Fuselage is a box. Lead noseblock saves having excessive length forward of the wing leading edge, while turned up effect is for towline stability. I have this on my A/2 also and it seems to aid a dead straight tow. This was one reason why an underfin was omitted. The old block and trigger auto-rudder was used, as I found that in my other gliders the two-hook and auto-rudder combined variants were inclined to work prematurely and be anything but positive. If properly done, the former type is far better I feel..." 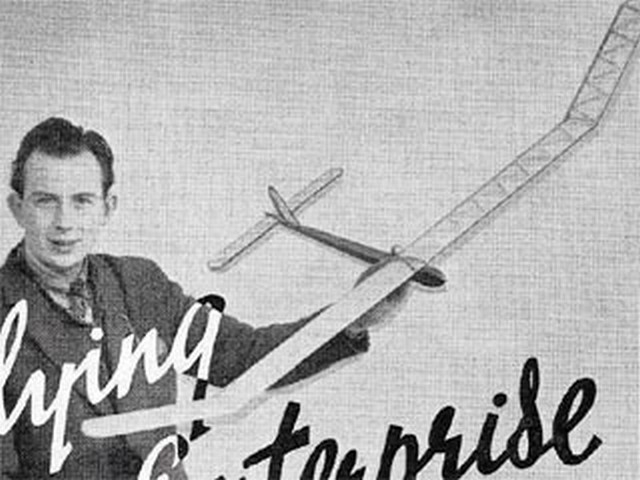