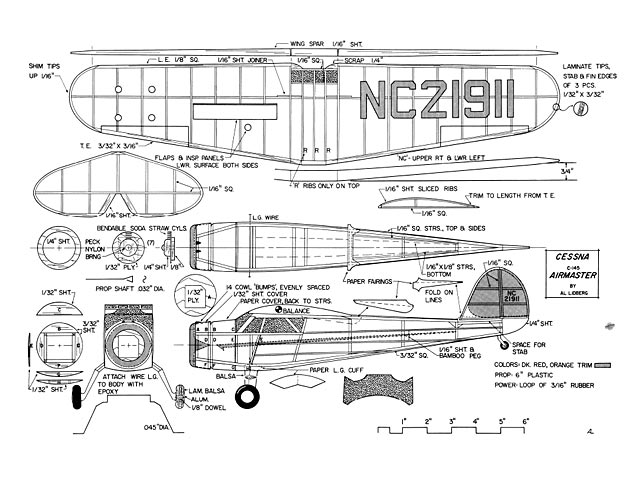 ACCORDING TO 'Light Plane Guide' the 1934 C-34 Airmaster was the world's most efficient airplane. The C145 is a slightly later (1939-42) version of this plane, using the same engine (145 hp Warner), and with slight modifications to the flaps and rudder. I had been interested in the Airmaster for a long time as a model subject and finally managed to find one and photograph it at an antique fly-in. I examined the real plane and found it was mostly fabric covered, so a stick-and-tissue model would be easily built and authentic.

Construction is fairly conventional so it shouldn't cause you much difficulty. Begin the body by making two identical side frames. Pin the completed sides upside-down over the top view, adding cross braces to complete the body box. Remove them from the board and begin adding formers. Start with ply former A which is glued to the front of the box. Glue on one set of B, D, and F formers to form the rear edge of the cowl. Cut out another set of B, D, and F formers and sand a quarter-round surface on their curved edges. Add these right behind the first set. Formers C, E, 0, and H can now be added. Bend the landing gear wire and attach it with epoxy right in front of H, making sure it's firmly adhered to the bottom longeron and the upright above H.

Add the side and bottom stringers next, tapering them as needed before gluing them to the body. (The top stringers go on after the wing is attached.) Cover the cowl from A to B, D, F with 1/32-inch sheeting and add the 1/4-inch sheeting ring in front of A. Sand the cowl to shape. Using stiff paper (bond stationery is usually good for this), cover from the cowl back to the windshield former C, and to the stringers on the sides and bottom. Add balsa fairing strips to the landing gear wire with epoxy, using plastic balsa to fill out the shape near the wheels.

Make up the nose plug as shown. The notch on one corner insures that the plug will always fit on the same way. Bendable soda straws have a V2-inch long section that looks like cylinder fins. Cut seven half cylinders, then space them around the 1/4- inch sheeting crankcase..." 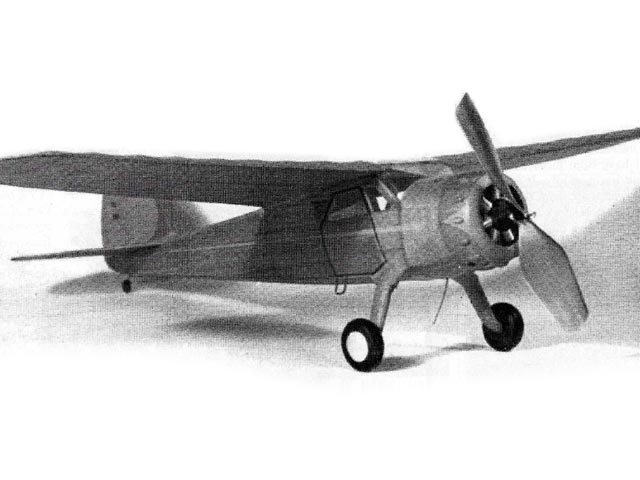