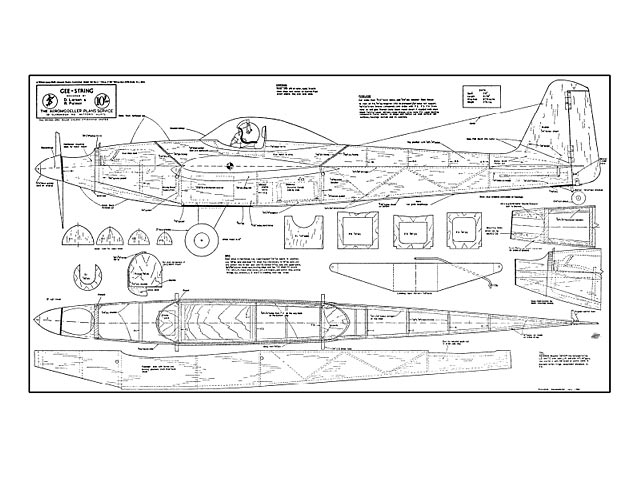 Quote: "A 70 inch Radio Controlled model for multi-channels which harmonises all the best features of a fully aerobatic design with simple structure and attractive appearance. by Bob Palmer & Dick Larsen

THIS IS A combined effort by two long experienced aeromodellers who wanted a multi-channel design that would be easy on the nerves when airborne, smooth in its flight pattern and yet sensitive enough to manage any manoeuvre in the book. The result in the words of maestro Bob Palmer is: Anyone who flies multi will have a good plane in the Gee-String. Mine flew right off the board first flight with the force set-up and balance exactly as on the plan. It's a relaxing plane to fly, just stable enough to be easy, the longer nose making the turns keep the nose up, yet it still rolls very well and will roll on rudder alone.

The design owes inspiration to Jerry Nelson's well known Pegasus (oz6800) but many design changes have been applied in the course of development over four prototypes.

Through his work as a modeller for Lockheed, Bob Palmer has to make many trips to the Moffett Field wind tunnels from his home near Los Angeles, and in the course of one of these trips, met Dick Larsen who was flying the original shoulder wing Gee-String. Bob flew it and was impressed. It did not drop a wing if speed was lost on a landing approach with too much up elevator applied, and in general it showed such promise that together, the two modellers devised further improvement changes, and the second and third prototypes soon built.

Among its virtues is the inverted flight characteristic of not needing much down trim for level flight; but a point that has to be watched by the novice is limitation of tail control surface movement, for the Gee-String will jump like a scalded cat or spin like a sycamore seed on full rudder/elevator motion. Application of restricted control movement makes the model ideal for the man who wants to feel his way into radio controlled aerobatics, and to progress to contest style performance all with the same model..." 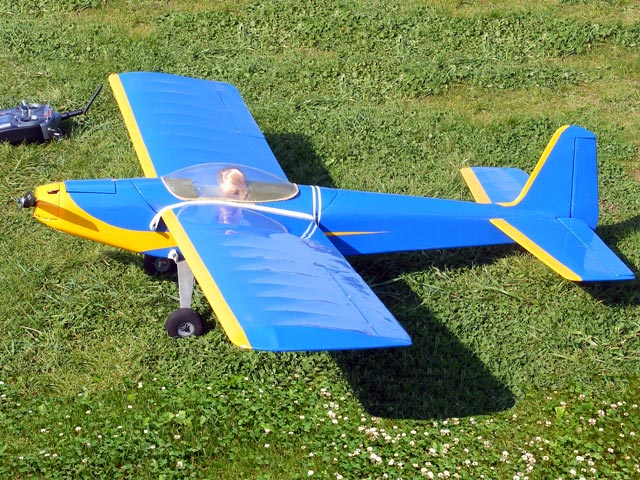 Hi, Oz is my go-to site for plans and inspiration. Thanks for the great work you are doing to maintain that archive. I note that there are no comments or recent photos of the Gee String. The attached details [see supplement flight report] are of a very successful e-power rebuild about 15 years ago [main pic] that I have just retrieved out of a dusty corner, hoping for some nostalgia events this year. There is nothing wrong with IC and I remain a confirmed member of the oily-hand brigade but the motor details may help new builders wanting to use e-power. Noteworthy is that the use of modern equipment results in an AUW significantly less than the original. Regards,
Mike Spencer - 02/06/2021
Add a comment